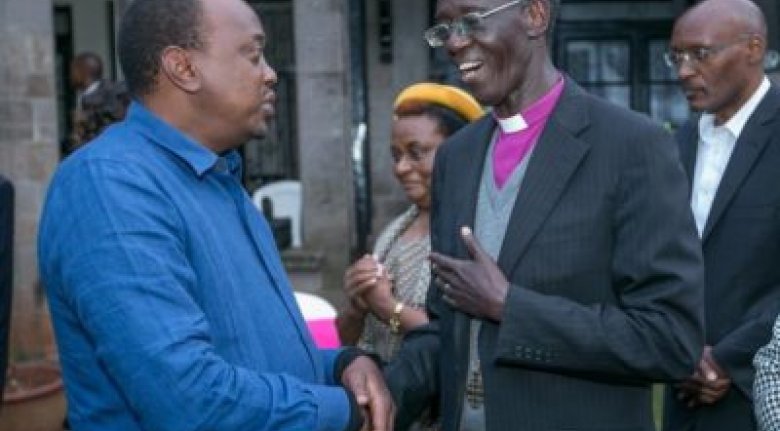 President Uhuru Kenyatta has commended outgoing Anglican Archbishop Eliud Wabukala for his great and wise leadership which has ensured peace and harmony among Christians and Kenyans.

Speaking during a farewell party at the Archbishop’s residence on Sunday, President Kenyatta urged Kenyans to emulate the retiring Archbishop when given opportunity to serve.

“Indeed it is a foundation on which those that come after you, will need to build on,” he added.

The President challenged Kenyans to always leave institutions better than they found them when given opportunity to serve the country.

“There is a new Anglican bishop coming and the Anglican community will continue. No one is here permanently but Kenya and her people shall always be here,” Uhuru said adding that leaders who are given opportunities to serve should ensure they leave people more prosperous and more harmonious than they found them.

The head of state said the retiring Archbishop has been an inspiration to many people having imparted words of wisdom and counsel to leaders and Kenyans.

He thanked the Archbishop for being in the forefront in championing for morality in the Kenyan society.

“You have been instrumental in working together not only with my government but also the previous regimes on many issues, from bringing peace to different communities to helping us in the fight against corruption and bringing morality and good standing to our nation,” Uhuru said.

On his part, the retiring Archbishop Wabukala thanked the President for his support and humility which has ensured the country continues to progress despite many challenges.

He assured the President of his prayers and moral support even as he retires from service.