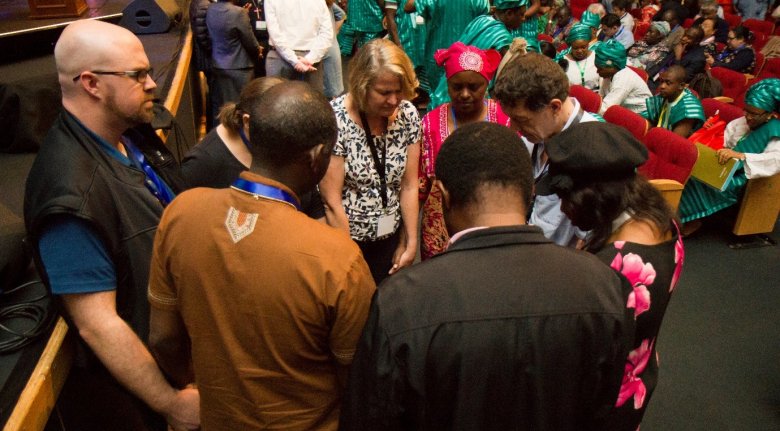 My constant prayer before we met in Jerusalem was a simple one, ‘Lord, meet us in Jerusalem’.

I believe he did.

Together, we heard his word, we sought his face, we sang his praises, we listened to his servants, we shared his Supper. We heard teaching, we heard testimony, we heard prophetic words. We were so conscious of being in the godly tradition of the Church, from its foundations onward, singing ‘Faith of our Fathers’, heirs of the Catholic and Reformed tradition of our faith.

His Spirit was with us.

Many people have contacted me, moved and awed by the experience. I suppose that one of the chief elements of this sense of being blessed was the richness and comprehensiveness of the fellowship. We were seated with one person we knew and with six strangers. Each morning for twenty minutes we shared and prayed in these groups. Many of the people there testified to me that this was the best thing of all. In fact, you could see it, as groups migrated out of the hall into the corridors and stood together, listening then praying.

We were strangers, but we were not strangers: we were family, all one in Christ, all indwelt by the Spirit, all children of the same Father. We learned that we are not alone. And we listened to each other, re-shaping the final letter from Jerusalem until it met with virtually universal acclaim.

Then there were ‘the God moments’, small miracles of God’s sovereign care and protection. There were the large signs of God’s care too, as the big risks of running a conference like this were, one by one, dealt with until in the end they were mere history. And there was the succession announcement at the end as by God’s grace, the Primates were given wisdom to see who God has prepared to lead our movement next.

There were crises of visas, and accommodation and transport and the rest; there were misunderstandings and disagreements, cultural and theological.

That is what you expect when two thousand people gather from 50 nations with diverse experiences, addressed by 75 speakers from 25 countries in plenaries and in elective seminars and presentations.

But the joy of being God’s Anglican people, met together to find and do the will of the Lord overwhelmed all the negatives.

Some people have made a contrast with 2008, in that the secular media was not present and nor were most of the Anglican media outlets.

This makes me smile at the Lord’s sovereignty, for three reasons.

First, it shows that we were met for spiritual purposes, matters about which the world’s media shows its shocking ignorance through its indifference. But these spiritual matters make us who we are and give us courage to stand firm against the secularism which has engulfed the Church in some places.

Second, the communications team by-passed the media, ecclesiastical or secular, and told our story powerfully and effectively as the Conference went on day by day. Hundreds of thousands of people from around the world were with us.

Third, because it shows the maturity of our movement. Gafcon is not institutional. It is the future come into the present. It is Anglicans from around the world combining, without any need for orders from the hierarchy, to win the lost world for Christ by defending and proclaiming the Gospel.

And so, the Lord met us in Jerusalem with his presence and his challenge: ‘Proclaim Christ faithfully to the nations!’