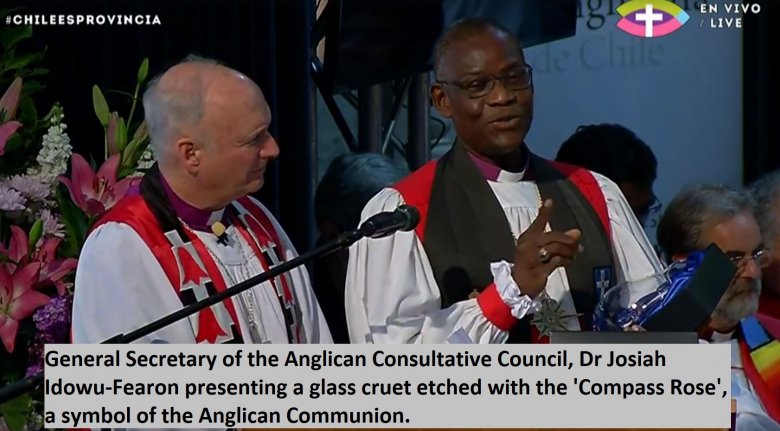 This month, Chile became the newest province in the Anglican Communion, with national and international guests gathering in the capital, Santiago, for the celebrations presided over by the Archbishop of Canterbury.  Among the attendees was the General Secretary of the Anglican Consultative Council, Dr Josiah Idowu-Fearon, who presented a gift which he claimed symbolized the Anglican Communion. The gift was a glass cruet for communion wine, and it was etched with the Compass Rose, a design set in the nave of Canterbury Cathedral at the time of the 1988 Lambeth Conference.

“It is our practice to remind all newly enthroned Primates that this communion of churches is very precious, and as Primates they are responsible for keeping this precious family together. They have no right to break it, and that is why we give them something that is breakable. So that they make sure they don’t drop it.”

To those unfamiliar with the history of the Anglican Communion it must have been just a nice illustration, but to those who are familiar with that history it was quite a statement remarkable for the depth of self-deception it revealed.

The truth is that the Anglican ‘Communion’ hasn’t shared communion in decades, making a cruet that holds communion wine a decidedly odd gift.  In the early 2000’s, liberal provinces such as The Episcopal Church and Anglican Church of Canada blatantly ignored the calls for biblical faithfulness and restraint from the 1998 Lambeth Conference and successive Primates Meetings and engaged in a scorched-earth strategy of litigation against traditionalists.

Orthodox Anglican provinces from around the world responded by calling for repentance and recognizing that fellowship and communion was not possible until this call to repentance was heeded.  When the Lambeth Conference meets in 2020 many bishops, including those of the largest Anglican provinces, will again be absent, and it will mark 17 years since Anglicans last shared communion.

Despite their supposed expertise in ‘reconciliation’, Dr Idowu-Fearon and Archbishop Welby have only exacerbated these problems, allowing provinces such as TEC (the United States), Canada, Scotland, Brazil, and others to run like bulls through a china shop; breaking fragile, ancient, valuable vessels of Communion with impunity.

Dr Idowu-Fearon’s office in particular has been dependent upon the revisionist activists who fund their programmes, and often staff their initiatives.  Revisionists don’t just work to re-write history, they also falsify the present in order to try to shape the future.  Turning up in Chile and attempting to pass off a beautiful crystal cruet as a symbol of the Anglican Communion when the whole world can see the shards of glass scattered across the global floor isn’t remotely credible, but it is the sort of fiction some are dedicated to promoting.  It would have been more honest to have handed Chile a box of broken glass and super glue, and humbly asked for their help putting it back together.

For Canterbury appearances are everything, even if that means encouraging faithful provinces to get comfortable with offering false teachers the right hand of fellowship and being a ‘good province’, smile for the group photo, pretend that all is well, and come to the communion table. That such things condone the violation of apostolic boundaries is glossed over by ‘good disagreement’.

The good news for Chile is that they can’t break what’s already broken. The revisionists and their institutional enablers have repeatedly dropped the gift of communion long before.  The bad news for Chile is that if they acknowledge the fractures that already exist in the Communion, and act in accordance with biblical principles, they may well be blamed for being a part of the problem. That’s the game being played.  Those who lectured Chile about ‘communion’ are the same ones who will soon invite the communion-breakers to Lambeth and insist that the orthodox in Chile have a duty to attend.

Pray for Chile.  These are hard decisions to make for a province in their infancy.