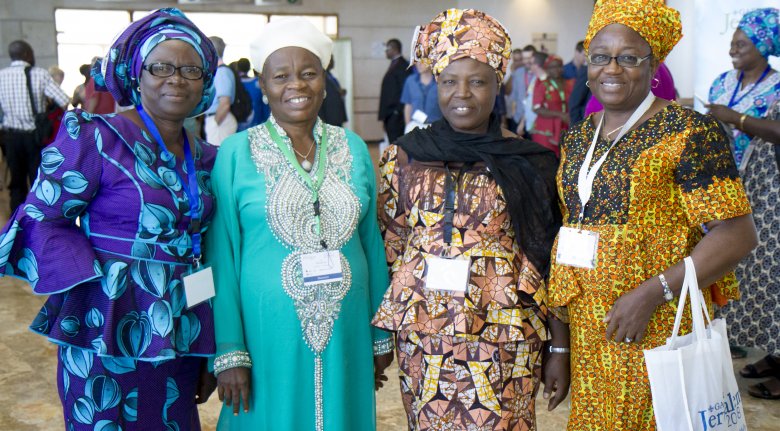 Some have stylish head wraps. Others sport the good, old baseball cap. There is the elegant head-to-toe outfit, and then the occasional eye-catching cassock. Has anyone really missed the fashionable hipster beards or the bewhiskered wizened priests, Levitical in appearance and vocation, visiting the land of Aaron for GAFCON III?

Wherever you look, if you close your eyes to the understandable monotony of maroon/grey/black clergy shirts, you are likely to behold a kaleidoscope of colour in dress, hair and shoe among the 2,000 gathered in Jerusalem. Even then, the clergy are not entirely dull – there is one from either Kenya or Tanzania who has just decided to cover his priestly garments with a brilliant red Maasai blanket, a wraparound so beloved of the photogenic pastoral tribe of East Africa. Another, the Rt. Rev Owen Nwokolo of the Diocese on the Niger, Anambra State in Nigeria, even matched his bishop’s shirt with the maroon embroidery of a fashionable jacket.

I am certain I spotted an Anglican bishop spotting a ‘kippah’, the skullcap that defines Orthodox Jews in this, Israel’s eternal capital. Another was espied, collar in place at the neck, neither grey nor maroon, but topping off a floral shirt that typifies West African males.

In the sweltering Jerusalem summer, the Aussies, Papuans and New Zealanders, jetting in straight from the southern winter, are reckoned to be perceptive when they don their lighter cotton wear. Why, then, have a couple been seen in out-of-season jackets? Turns out they are on the communication team, for the Media Centre sent out a pre-conference alert about temperatures in the newsroom.

For the Africans on the communication team, the media center feels like either early winter, what with air-conditioning that is either on, the temperature fixed in one position, or a day on the savannah, when the AC is turned off. Neither spring nor fall, the AC runs a steady, humming 15 degrees or nothing. The Comms volunteer who was hugging herself with a scarf, though, is North American, not African. And so, in the Media Center, there is a variety of warm wear – a scarf here, a summer jacket there, punctuated by the occasional dash into the Judean sun to absorb some warmth. Radiating like the Middle Eastern summer, one Comms volunteer was the epitome of hot on Day 3, radiant in yellow slacks that he defined as “sunny”. So much for cool.

The greatest range of fashion comes in head dresses and the sheer variety of hairstyles. Head dresses are invariably dominated by the West Africans, of whom the Nigerians make a disproportionate number, what with their choir so prominent and colourful on the stage. The Ghanaians are neat in their outfits as are the Gambians and Sierra Leonians, though, from the other side of Africa, Ugandan ladies do make a shout of their own.

The ‘busuuti’ or ‘gomesi’ that the odd Ugandan sister has donned is an elegant silk outfit that flows from shoulder to foot, strapped round the waist to make for a slightly exaggerated figure. In fabric, the aforesaid ‘busuuti’ is closely related to the ‘mushanana’, which has been seen on delegates from Rwanda and Burundi, though not the priests, for the silk and fashion are aesthetically unsuited for the dog collar. It gets even better when there is a hairstyle to complement, as was seen with Ugandan delegate Ruth Senyonyi, a facilitator in one of the seminars, who sported a soft perm. The hairstyles are as varied as there are nations in the ICCJ auditorium.

The extravagantly-coiffured are not limited to the ladies – a couple of Anglican males would give the sisters a run for their shekels. It has been whispered that there will be a competition for the most outstanding beard – a tip that came three months late for me. Seemingly set for any time, any day, any place, the Indian Metropolitan, the Most Rev. K.P. Yohannan, from Believers Eastern Church in Kerala, on the Indian eastern seaboard, would be hard to beat, being imperial in both attire and beard. Yohannan’s bright red cassock, white mane, and genteel character make him an instant attraction for those seeking trip-defining photos to take home.

Were GAFCON to morph into the World Cup of fashion, the Nigerians, what with their variety of textile and style, and sheer numbers of delegates, would surely be crowned champions. Nigeria already has an unfair advantage in the very visible choir. All that before Nigerian men don the splendid ‘agbada’, that all-flowing embroidered outfit that begins with leather sandals, via a tapestry of garment, interior and exterior, from toe to shoulder, topped off by a cap whose fancy needlework distinguishes it from the Islamic kind. Nigerians love a climactic finish, so the ‘agbada’ is likely to be on show on GAFCON’s final day.

The saving grace though, for the rest of the nations, may be that there will be no attention-stealing ‘agbada’ on show. “The ‘agbada’ is expensive to transport (by air),” one wag confided in me at the Museum tour on Tuesday. “Just one outfit will take up most of your baggage allowance (being very heavy in texture and massive in spread), and you would not be able to travel with much else.”

We thank God for small mercies.

A full album of photos showcasing the range of fashion trends on show at GAFCON 2018 can be viewed here.