Two Ways to Walk: A reflection of the Caminemos Juntos Conference in Brazil 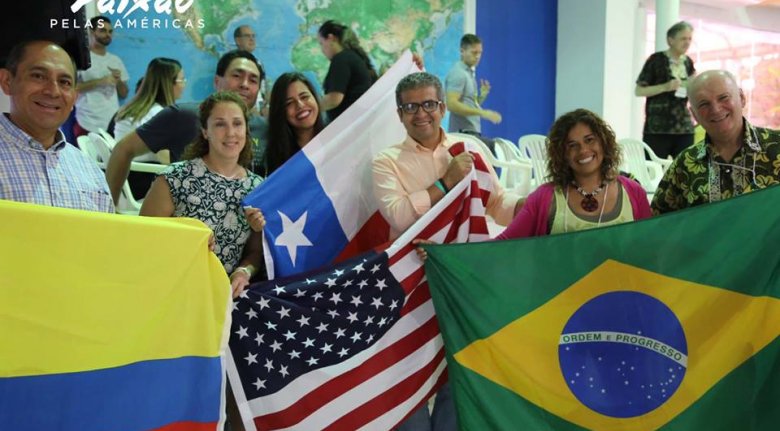 While the Canterbury Primates Meeting was taking place earlier this month with its heavily contrived 'Walking Together' theme, despite the principled absence of Primates representing some 30 million Anglicans, a very different 'Walking Together' was being practiced by Anglicans meeting in Brazil.

Caminemos Juntos, which in Spanish means 'Let's Walk Together', is an Anglican Latino mission and church planting initiative for the whole of South, Central and North America. Its leadership team includes Bishop Tito Zavala of the Diocese of Chile with its coastline of over 2,600 miles, Bishop Miguel Uchoa of the Anglican Diocese of Recife which covers an area about the size of Western Europe in the north east of Brazil as well as leaders from the ACNA in North America Canon William Beasley and Rev. Jonathan Kindberg.

I was recently privileged to attend their annual conference in Recife from 5th-7th October along with some one hundred and fifty delegates from ten different nations. It was a wonderful reminder that though the traditional leadership of the Communion is losing the gospel for the sake of institutional compromise, here are people who are willing to lose their lives for the sake of the gospel.

The Canterbury version of 'Walking Together' is energised not by mission, but by church politics. It is quite obvious that the primary concern is inward looking. Essentially, the preoccupation of successive Archbishops of Canterbury since 1998 has been how to somehow contain orthodox Anglicans in the same global institutions as those who steadfastly reject orthodox faith and substitute their own ideas for the Bible's teaching, most obviously on sin, sexuality and marriage.

In contrast, Caminemos Juntos is outward looking. The conference venue itself symbolized the vitality and vision of the movement. We were hosted by the Anglican Parish of Espiritu Santo (Holy Spirit), founded by Bishop Miguel in 2006 in a building which had previously been known as 'Babylon', one of Recife's leading night clubs, and has now grown to some 3,000 members. Caminemos Juntos as a whole is energised by this passion to serve and reach the lost for whom Christ died. New churches are being planted throughout the Americas, new missionary dioceses are being created and there is even a successful Chilean mission in India with a missionary partnership between Recife and an African diocese being planned.

The biblical principles which Gafcon stands for have played a key role in the Caminemos Juntos story. The Diocese of Recife, now led by Bishop Miguel, was expelled from the Anglican Episcopal Church of Brazil (IEAB) in 2005 because it adhered to Lambeth Resolution I.10 which affirmed that homosexual practice was contrary to Scripture and would not continue in communion with the American Episcopal Church (TEC) which had rejected that teaching and adopted a liberal and revisionist theology.

At the time, Archbishop Gregory Venables of the Anglican Church of South America (then known as the Southern Cone), intervened and granted recognition and licenses to the bishop of Recife and his clergy and in so doing demonstrated what true 'Walking Together' should look like when the gospel is threatened.

The Diocese of Recife is now recognised directly by the Gafcon Primates Council and it has authorised Bishop Miguel to establish episcopcal oversight of 'existing and potential' churches in Central America and those parts of northern South America also in TEC aligned Provinces. This work is starting to bear fruit and it was a great joy to meet faithful Anglican clergy from these areas who now have somewhere to belong.

A similar process is underway as well in Mexico as the ACNA has decided to offer oversight for leaders in that country who cannot in good conscience work with the Anglican Province of Mexico which is, unfortunately, theologically and financially tied to the Episcopal Church of the US (TEC).

Caminemos Juntos is a wonderful example of the vision of Gafcon in practice. It demonstrates the great purpose set out in the Jerusalem Statement and Declaration 2008, namely 'to free our churches for a clear and certain witness to Jesus Christ'. At the heart of the Gafcon movement is a vision for the Anglican Communion to be an effective means of reaching people for Christ worldwide. True 'Walking Together' will, where necessary, create new structures to serve the gospel. It will not be distracted by a false 'Walking Together' which tries to change the gospel to serve old structures.