Things are Flat in Jerusalem 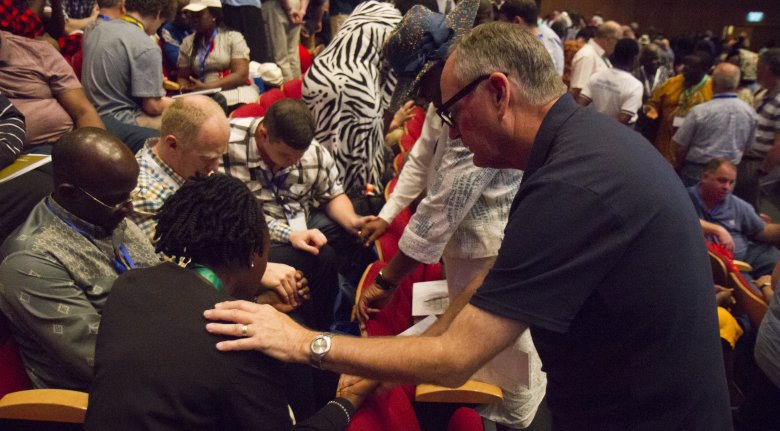 Everything is rather flat here at Gafcon III Jerusalem.

Not emotionally flat- that is no way the case: there is great excitement among the delegates, which only grows as the week unfolds.

Nor, of course, is Jerusalem geographically flat! It is not difficult to see why the faithful needed a few Psalms of Ascent to spur them on their way up to the city.

It is just that inherently and structurally Gafcon is flat- deliberately and increasingly so.

This “flatness” stems from the universal subscription of all the delegates to the Jerusalem Declaration. However exalted the ecclesiastical status of any delegate may be, no one is at at Gafcon who has not fully signed-up to this Declaration. Part of the it reads:

“We gladly proclaim and submit to the unique and universal Lordship of Jesus Christ, the Son of God, humanity’s only Saviour from sin, judgement and hell, who lived the life we could not live and died the death that we deserve.”

There is not much scope for assuming superiority or practicing inequality amongst those who have sincerely affirmed that!

Of course, there are Primates, Archbishops, Bishops, clergy and laity in Jerusalem but those are differences of role not status, so this is not a conference where they are separated from each other. Intentionally, in fact, the opposite is the case: the 2000 delegates are split into groups of eight with whom they will sit in the main auditorium throughout the week, so they can study, discuss and pray together. A group might comprise a youth worker from New Zealand, an Archbishop from South America, a senior vicar from Myanmar, a Mother’s Union leader from Papua New Guinea, a bishop’s wife from Nigeria, a curate from Germany, a lawyer from Rwanda and a theological educator from the USA.

And Gafcon is liturgical- and there is no greater leveller than common liturgy, shared aloud together.

The great innovation of this Gafcon is nine new networks - horizontal relationships linking Anglicans serving in similar spheres, wherever they are in the world, regardless of whether they are senior, well known and in a thriving Province or young, unknown and in a struggling one.

Joining a network in Jerusalem is a commitment to working with co-members for five years. These networks will function largely virtually, which serves to remove many of the differences that arise from geography, resources and perceived status. Anyone in any network is free to call upon its services or offer whatever degree assistance they are able to render to others: a youth worker in Kinshasa can offer ideas to a youth worker in Kansas. Equally, networks can access other networks- a needy church plant can seek the ministry of the intercessors. No hierarchy, no exclusivity, all in the service of all, for the renewal of the Anglican Communion.

GAFCON is not a “typical” Christian conference of teaching, prayer and worship fairly “passively” received- it is a working conference. It will conclude with a “statement”, not something that has been written in advance like a political summit, but something written by the delegates as the conference goes along. On Thursday afternoon each national delegation will meet to decide what they would like to contribute. The statement will be an expression of the mind of Gafcon - all of it.

Flatness also leads inevitably to accessibility for as many as possible- Gafcon is not an exclusive or elite “club” but a movement of people in the worldwide Anglican Communion and so www.gafcon.org offers a livestream, highlights packages, news and stories. #gafcon2018 and the GAFCON Facebook page offer the opportunity for those who are not in Jerusalem to contribute to proceedings

On the transfer bus the seat in front was occupied by a retired Primate, to the left was an exhausted young Brazilian woman, behind was the vicar of an English urban church. All delayed, all on the same bus, all going in the same direction - that is the flatness of GAFCON.