The Anglican Church Of Canada a.k.a. The Episcopal Church (North) 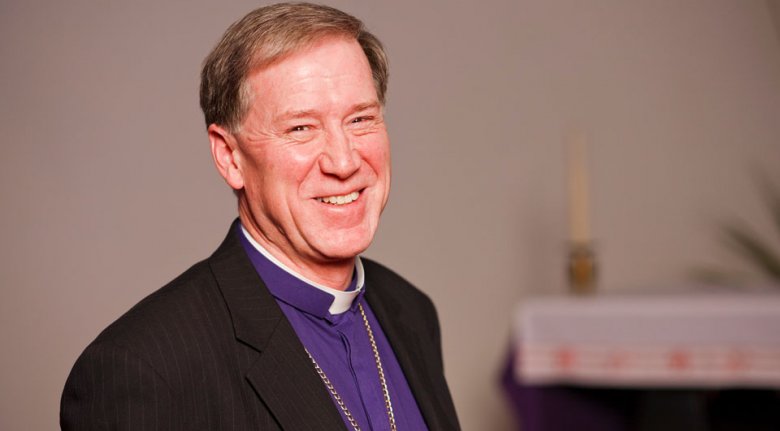 The Anglican Journal reports that the head of the Anglican Church of Canada (ACoC), Archbishop Fred Hiltz (pictured above), met December 9, for his “annual meeting” with Justin Welby, Archbishop of Canterbury. According to the Journal, Archbishop Hiltz is concerned about the agenda for the upcoming special gathering of Primates January 11-17 in Canterbury. He seems to be concerned about whether the meeting will have the “proper organization” to ensure a good outcome for his Church:

“I am hoping to get a clearer picture… of what he [Welby] sees as the dynamics around our actual gathering, and our actual staying together for the course of the whole meeting.”

It sounds like there is some anxiety on the part of the ACoC. Could it be that they are worried about being excluded themselves, of being tied too closely to The Episcopal Church (TEC) and its repeated violations of Biblical and communion teaching on human sexuality, Biblical authority, and the mind of the Church in its decision making on these issues?

It will be difficult for them to differentiate themselves from TEC, for it was the decision of the ACoC Diocese of New Westminster in 2003, along with TEC’s consecration of a partnered homosexual bishop, that originally tore the fabric of the Anglican Communion.

Since then, consider the “facts of the ground” (taken from Martin Davies’ recent paper) that the ACoC has established in Canada:

Frankly, this follows exactly the pattern we saw in the United States in TEC: create facts on the ground in violation of the Bible, and then call for “theological reflection” upon those facts-that-you-have-just-established. In this case, the theological reflection in “This Holy Estate” presents only three possibilities for the General Synod, none of which affirms a Biblically faithful understanding of marriage and human sexuality. Those three options are:

(1) Same-sex marriage is simply an “undifferentiated” form of Christian marriage, essentially identical to heterosexual marriage, and requiring the wording of the Marriage Canon to be gender-neutral, substituting “partners” for “husband and wife,” for example; or

(2) “Blessed partnerships” rather than covenants before God, creating a separate category but without the “covenanting love” that we find in a marriage; or

(3) The middle option, to permit “Same-sex covenants as a differentiated form of Christian Marriage Covenant.” In effect, the Church is “grafting” same sex couples into the existing institution of Christian marriage, “enriching and expanding its meaning, yet without denying its previous meaning (from p. 53 of the Report).

It is this “pluriform” reality that “This Holy Estate” recommends. Of course. It is the Anglican way of compromise, the middle way. It reminds me also of Rule 11 of Saul Alinsky’s Rules for Radicals: “The price of a successful attack is a constructive alternative.” You never let your opponent score points because you’re caught without a solution to the problem. So if you are an activist organization seeking to overthrow the status quo, you create a problem and then offer a compromise solution, to hold your place at the table.

I hope you will take time to read Dr. Martin Davie’s review of “This Holy Estate.” All 17 pages are worth reading. Writing for The Church of England Evangelical Council, he refutes the ACoC Report “This Holy Estate” (“the Report”) under five broad categories:

1. Its recommendations to bless same-sex marriages and unions dishonor and misrepresent Biblical teaching

In Part V, “Responding to the Report,” at paragraph 4, Davie points out that what the Report says about the authority and reading of Scripture is misleading. The Report claims that the Bible has no final authority “apart from interpretation and application.” But as Davie notes, the Bible has intrinsic authority in and of itself because it is God’s word written! “It does not become authoritative only when it is understood and applied.” (p.10) Therefore the Bible stands over every human philosophy or politically correct agenda that we may come up with, rather than the opposite. From its fundamentally flawed assumption about the authority of the Bible, Davie then goes on to demonstrate how the report fails to engage with relevant Biblical material (para. 5), how it misrepresents Old Testament passages (on creation, the place of gender and procreation in humanity, “in the image of God,” how it conspicuously omits the reference to “man and wife,” male and female, in Genesis 2:24, at paras. 8-11 and 15-16), and how it misrepresents New Testament passages (for example, wrongfully concluding that because Jesus was responding to a specific question on divorce in Mark 10 and Matthew 19 that his appeal to Genesis 1:27 and 2:24 does not give us a timeless doctrine of marriage (a non-sequitur), misrepresenting Paul’s teaching in Galatians 3:28, Ephesians 5:32 and Romans 1:26-27, and failing to provide convincing evidence that God is performing a new act of grace in our time analogous to the admission of the Gentiles into the Church in Acts 10-15, a salvation issue, at paras. 12-18).

2. Its recommendations disrespect the mind of the Churches of the Anglican Communion

The Report fails to explain why it would be right to ignore the views of the Anglican Communion as expressed through the Inter-Anglican Standing Commission on Unity, Faith and Order, warning ACoC that blessing same-sex couples will further divide the Communion, and therefore not to do it. The Report simply states that it has discharged its obligations to the Churches of the Anglican Communion (and the Roman Catholic Church, which issued a similar warning) by consulting with them! But as Davie points out:
“…the churches of the Anglican Communion have not been seen as having the right to simply make any decisions they want to. As the classic statement of the encyclical letter from the 1920 Lambeth Conference put it, Anglican churches: ‘…are indeed independent, but independent with the Christian freedom which recognizes the restraints of truth and of love. They are not free to deny the truth. They are not free to ignore the fellowship.’” (Paras, 1 and 2, pp. 9-10)

3. Its recommendations are in violation of the Solemn Declarations (Doctrine) of the ACoC

4. It is hostage to a logical fallacy: It assumes what it sets out to prove

“Because it limits its focus in this way the report does not get to what is the heart of the matter from a traditional Christian perspective, which is whether such relationships should exist at all. The report simply does not engage with this issue.

“From a traditional Christian perspective this is like discussing whether an adulterous relationship should be regarded as a marriage without addressing the issue of whether it should exist at all.” (Davie, para. 6 at 11)

5. It gives up on rational argument: discernment is by the “Spirit”

Having listed its reasons for supposing that God might have changed his mind as written in the Bible and “might now be supportive of an expansion of the boundaries of marriage,” the Report blows all of this away with the assertion that the Church must in any case prayerfully discern “the new thing the Spirit is doing in our midst.” Does this sound familiar? It certainly does, as Davie observes:
“The suggestion seems to be that through prayer we move to a place beyond argument where we simply and directly know God’s will. The question is however, how we can know that we are not being deceived. 1 John 4:1 warns us ‘do not believe every spirit, but test the spirits to see whether they are of God.’ We have to decide whether what we think is the guiding of the Spirit is in fact so or is an act of deception by evil spirits seeking to lead us away from God and the way to test this is through using our God given rational faculties to test what is being proposed against the objective standard of God’s Spirit inspired self-revelation in Holy Scripture. If the proposal to extend marriage cannot meet this test then it is not of God. For this reason the Church cannot rightly move beyond rational argument in the way that the report proposes.” (Davie, para. 19 at 17, emphasis added).

The Anglican Church of Canada may be flying lower under the radar than TEC, but it is flying in exactly the same directions—and it shows no signs of turning back. What is even worse is that it has taken a leadership role in initiating “dialogue” with Global South Anglican leaders and churches to advance this misleading and revisionist agenda. It is time for the Primates of the Anglican Communion to take notice, and take action.

The Rev. Canon Phil Ashey is CEO of the American Anglican Council