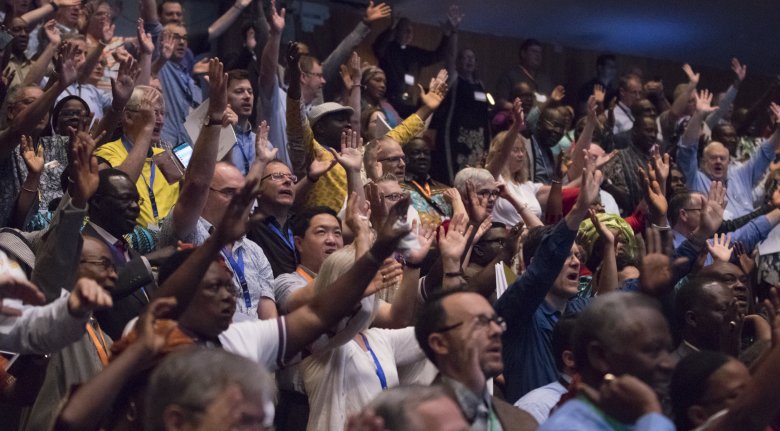 Martin Luther’s famous paraphrase of Psalm 46, probably written as plague approached Wittenberg, was the opening hymn at Morning Prayer on this the fourth day of GAFCON III in Jerusalem. It was the right choice for a day in which the delegates heard from those who have paid the price of “Proclaiming Christ Faithfully to the Nations”.

Much of what was said at GAFCON this afternoon cannot be reported because their lives are at risk, and have no security except that the Lord is their mighty fortress. Their testimonies won’t easily be forgotten so an awed silence will have to speak eloquently for the sacrifices that some delegates have made for the sake of the Lord Jesus Christ and have experienced real agony in taking up their cross.

As delegates heard from the living, “those who had been slain for the word of God and for the witness they had borne,” were not forgotten. We sang Matt Redman’s “10,000 Reasons” and rejoiced with the martyrs that when, “…our time has come” it is only the start of “…praise unending… forevermore.”

Possessions, family and life itself, delegates heard of all these prices being paid for Gospel faithfulness. And the lessons were clear:

“God does not owe you anything for your faithfulness. It was an honour to suffer for him. Stand firm.”

“Be Firm, be faithful, be strong, be courageous…and don’t be ashamed of Jesus”.

“I am suffering persecution as a Christian leader and that is part of the job”.

“If we are persecuted let us remember that Christ himself suffered and that he has promised us that as Christians we will suffer persecution”.

“If I die for Christ I know where I am going to. And that is why I am happy”.

Everything delegates heard confirmed the truth of Luther’s words, “For still our ancient foe doth seek to work us woe; his craft and power are great, and armed with cruel hate…”  This is the reality for many delegates and it will become reality for more as other religions and militant secularism are used as by the devil to work woe amongst faithful believers.

Filing out of the auditorium subdued very aware that, “Did we in our own strength confide, our striving would be losing, were not the right man on our side, the man of God's own choosing…and he must win the battle”… as, praise God, He has!