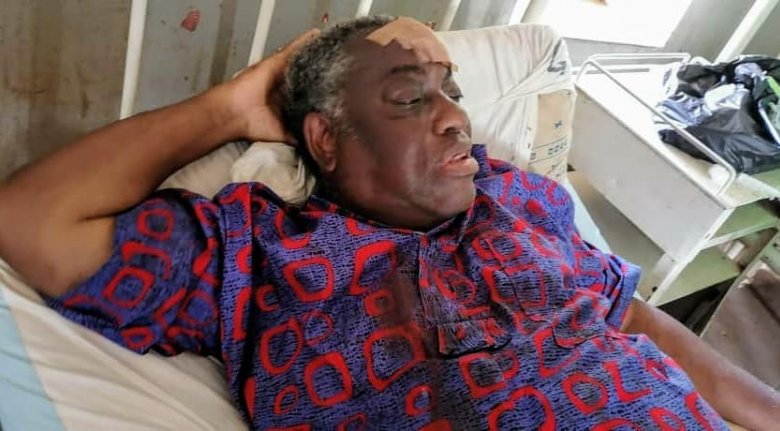 Rev. Canon Bayo and family was attacked in their compound on Tuesday, May 5, by Militant Fulani in the state of Plateau, Nigeria. Stefanos Foundation visited the scene providing photos and reporting that the attack could have been worse. Stefanos reports, "...at about 8:40pm, yesterday, while the family was having their evening devotion, 3 armed Fulani young men stormed the house with AK 47, machetes and other weapons. Stefanos gathered that the attackers forced their way into the room where the reverend and his family were having devotion and demanded that the reverend should give them money. When he replied that their was no money in the house, one of the attackers holding a gun immediately shot the reverend in the head and also in the leg and left him in the pool of his blood. The attackers, thinking that the reverend was dead, left for the other room where the other family members went into hiding. The family at that time was struggling to send text massages to friends and neighbors for help when suddenly they heard gun shots on the door. The gunmen found their way into the room and shot two of the reverend’s sons in their legs and also shot his wife in her back. They then immediately took to their heels when they learned that the security men were on their way to the house. After the gunmen left, the reverend, his wife Naomi and his sons who miraculously were all alive but with bullet wounds, were immediately rushed to Barkin Ladi General Hospital. However, due to the magnitude of her injuries, Naomi was later taken to Jos University Teaching Hospital (JUTh)."

"Uncle Bayo," as the people like to call Canon Bayo, is on the Diocese staff of Gafcon General Secretary, Archbishop Ben Kwashi. Canon Bayo is serving in pioneering missions and is the founding leader of the CAPRO Nigerian indigenous missionary organization.

Stefanos Foundation reports, "The Fulani herdsmen who are mostly Muslims have recently been seen carrying arms and are responsible for attacks on ethnic non-Muslim farming communities all over Nigeria, the majority of whom are Christian [who are attacked]. Many of these communities believe that the Fulani have just resorted to these violence as a jihad (Islamic holy war) against non-Muslims in Nigeria."

Let us keep Canon Bayo and his family in prayer as they appear to be in stable condition, and as the Stefanos Foundations writes, " [pray for the] many communities that are still vulnerable to the militant herdsmen at the moment."