New Friends From a New Province 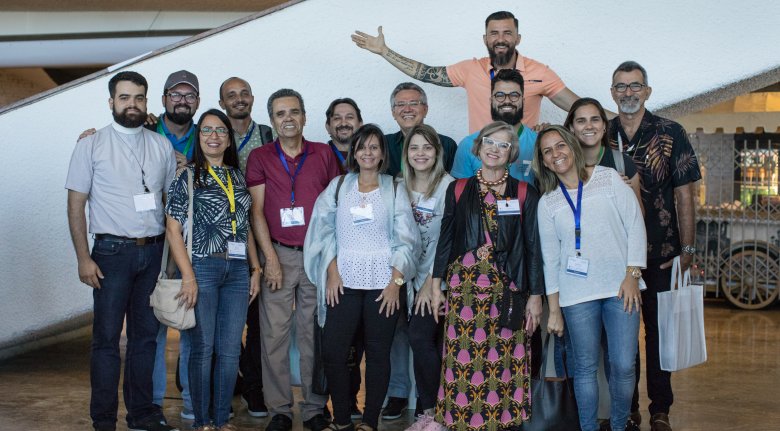 It’s the kind of thing that happens at Gafcon: meeting many old friends, but also new ones. I turned a corner and saw the whole delegation from the Anglican Church in Brazil lined up for a photo. At home, I’d read about the formation of the new, biblically faithful Province and its history in the courageous ministry of the Diocese of Recife. Now I could meet some representatives face to face.

Gyordano Montenegro was recently ordained Deacon and was able to briefly share some of the  new church’s story. He is based at the Cathedral of the new Diocese of Joao Pessoa, to the north of Recife, and also teaches in the seminary that has been established there. “It’s a mission area”, he says “and because of our emphasis on church planting we’ve seen a lot of growth”. The Cathedral leads the way, using a mix of traditional and contemporary worship styles, and a focus on reaching the unchurched.

The Most Rev. Miguel Uchoa is the first Archbishop of the new Anglican Church in Brazil.  Reflecting on the past thirteen years, he gave thanks for the fact that the Diocese of Recife had doubled in size.  But he went on to say that though logistics and finances have been the greatest challenge, there has also been a spiritual challenge: reclaiming Anglicanism’s reputation after the theological confusion sown by the Episcopal Church of Brazil. But the new province has developed the support of other evangelical and biblically-based Christian churches who now recognize them as the face of Anglicanism in Brazil.

The new Archbishop reiterated how getting through these challenges would have been near impossible without the practical support of Gafcon in helping to organize logistics and a new provincial structure step-by-step. But most importantly, Uchoa shared that Gafcon held Recife close in support while it was still just a diocese, “so we would not feel so alone.” Knowing that they were supported by the wider Global Anglican Communion was invaluable to their own encouragement as they struggled forward to maintain their identity.

There is still much to do. A major challenge for the church is the rapid influence of secularism, especially the widespread rejection of traditional moral teachings, and an increase in materialism. But there are plans.  Gyordano’s diocese is aiming to strengthen discipleship among the members of the new churches by working through a cell group structure for biblical teaching, mutual support and spiritual formation.   The Rt Rev. Miguel Uchoa spoke confidently about the future of the new Province. “I see Brazil moving forward to proclaim Christ faithfully but holistically,” he said. “Brazil has big gaps of life expectations and social gaps, with lots of poverty. As we preach the gospel, we act, developing programs and organizations to assist and help the poor to give them skills for work and other ways to help develop their lives. In my perspective, we can’t preach only by speaking and not doing. Brazil needs to see the practical effects of the Gospel as it is touched by the transforming love of Jesus Christ.”