Let’s Walk Together: The History of a New Church Planting Movement in Latin America 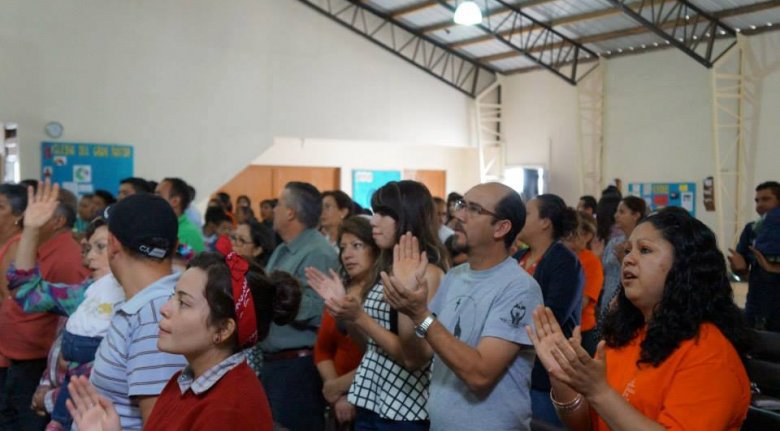 In 2012, Elias and Rayito Rosales from Aguascalientes, Mexico attended the 2nd annual Caminemos Juntos (Let’s Walk Together!) Latino church planting conference in Fresno, California, USA at the Cathedral of the Diocese of San Joaquin. This diocese was one of the first to leave the Episcopal church (TEC) and come temporarily under the oversight of the Province of South America until the formation of the Anglican Church in North America (ACNA).  Caminemos Juntos had begun the previous year in Chicago, Illinois, as an offshoot of the Greenhouse church planting movement with the vision of reaching the millions of Latino immigrants in the US. Though at the time Elias and Rayito were a part of the Province of the Anglican Church of Mexico, they were increasingly feeling out of place in a province even more unorthodox in many ways than TEC, and so were exploring this new, alternate Spanish speaking movement within the ACNA.

Unfortunately, the Province of the Anglican Church of Mexico over the course of many years had introduced teaching contrary to that of Scripture. For example, through the ordination of openly homosexual leaders and practices such as “derecho de estola” (literally translated as the “right of the stole”), which is the practice of essentially selling sacraments by charging parishioners fees for any sacramental duty done by the clergy.

At Caminemos Juntos they experienced a very different environment. They felt deeply at home and were warmly received by Archbishop Bob Duncan who prayed for them. At that meeting they were also prayed for by Archbishop Tito Zavala from Chile, part of the Province of South America, an increasingly close partner with the newly formed ACNA in the mission of reaching Latinos and Spanish speaking immigrants in the USA through Caminemos Juntos.

A heart bond was formed and soon Elias and Rayito formally, along with their congregation (Jesús es la Resurrección and La Trinidad, a small congregation led by Chilean Anglican immigrants in the city of Guadalajara), left the Anglican Church of Mexico to officially join the ACNA. Soon after this they were joined by Iglesia del Gran Pastor, a thriving congregation in the Mexican city of Fresnillo, Zacatecas.

The founding pastor of Iglesia del Gran Pastor, along with other Latino leaders of the ACNA, was present at the second GAFCON conference in Nairobi, Kenya. Gathered together under Caminemos Juntos and with the oversight of the ACNA, these congregations committed to a vision of church planting and reaching Mexico, the least evangelized country in Latin America with less than 15% of it’s citizens identifying as evangelical in a country of 120 million people. Their goal from the beginning was to plant 10 new churches and to reach 1,000 new souls for Christ, a lofty and challenging labour in which they are still engaged with all their strength.

Much of Latin America remains dependent on the Episcopal Church (TEC) in the US either through financial subsidies or as a part of TEC’s ‘Province 9’ which includes Honduras, Puerto Rico, the Dominican Republic, Colombia, Ecuador, and Venezuela. In 2015, the GAFCON Primates Council therefore granted Bishop Miguel Uchoa of Recife Diocese, now newly renamed as the Anglican Church in Brazil, the authority to offer “episcopal covering for orthodox Anglican Churches in central and northern South America who are unable to continue within their dioceses.”[1] In partnership with Bishop Miguel, this effectively expanded Caminemos Juntos’ mission to the 35 countries of the Americas, from northern Canada to Southern Chile and Argentina. Accordingly, Caminemos Juntos’ 2016 conference held in Santiago, Chile, took as its theme “Let’s Walk Together in the Americas: A Consultation on Anglican Mission and Church Planting.”. Framed around church planting and mission this gathering brought together 11 countries in the Americas and featured Archbishop Benjamin Kwashi from Nigeria as one of the keynote speakers. Following this gathering, the congregation in Colombia, Iglesia Anglicana La Vid, was officially received by Bishop Miguel Uchoa in December of 2016, kicking off the Anglican Church in Brazil’s “year of expansion.”

Much remains to be accomplished in Latin America. Caminemos Juntos’ next gathering for the Americas is planned for October 5-7 in Recife, Brazil. Here, the goal is to raise up Brazilian and Latin American missionaries and church planters who can be sent throughout the Americas and the world in this new phase of global mission which Lausanne has called “mission from everywhere to everywhere[2].”