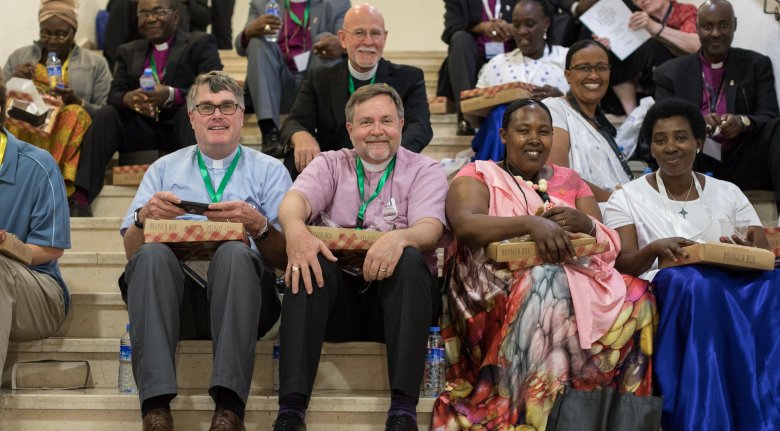 What pertains to a single Gafcon Province could also describe aptly the whole Gafcon movement.

For a movement it is. Out of what Gafcon General Secretary Dr Peter Jensen described today as the two significant moments for Gafcon- the Lambeth and Gafcon conferences of 2008, has come a single movement of increasing momentum.

The three Gafcon conferences will doubtless be of lasting significance- the great enduring melody of Gafcon but there is a counterpoint to that in what happens in the years in between.

Day in, day out, the ministry of the Gafcon movement moves ahead apace.

Since the conference in Nairobi five years ago there have been developments; internationally, provincially, episcopally, nationally and more informally.

Internationally, initial steps have been taken to establish a Panel of Assistance to provide ongoing analysis for and support of the work of the Primates’ Council. What has been now started will become of growing significance in the five years to come. Four initial meetings of parts of the Panel having taken place in Chile, Australia, Kenya and England. The full Panel will meet for the first time in Jerusalem today.

Provincially, Gafcon has recognised The Anglican Church in Brazil as the 41st and newest Province of the Anglican Communion. Speaking of the launch of the new Province, The Most Rev. Nicholas Okoh, Primate of All Nigeria and Gafcon Chairman said:

“We commend your courage to stand and be counted for Jesus at a time when many are in a state of self- inflicted confusion. We are loyal Anglicans, loyal to the faith once for all delivered to the Saints. We’re ready to march forward with those who embrace, or refuse to redefine, the apostolic faith.”

Episcopally, Gafcon Primates have consecrated +Andy Lines as Gafcon Missionary to Europe with particular responsibility at the present time for the needs of Scotland.

Nationally, new Gafcon branches are being formed such that Ireland has recently been added to the branches in the United Kingdom, South Africa, New Zealand, Australia. These branches exist to teach the gospel and make disciples in their own countries but also are ready to offer fellowship to Anglicans who may be forced to leave their diocese or church over matters of orthodoxy. The Nairobi Communique and Commitment, “…recognized the Anglican Mission in England (AMiE) as an expression of authentic Anglicanism both for those within and outside the Church of England”. AMiE continues to establish new Anglican churches in England.

Informally, and perhaps most valuably of all, relationships have been established between individuals and churches across the Gafcon world. Such relationships will grow naturally in both depth and extent but the process is to be given some further stimulus by the creation of nine new more formal Gafcon networks covering everything from youth ministry to legal matters. One network- the Bishop’s Training Institute has already met three times.

Forward, always forward, everywhere forward in the renewal of the Anglican Communion!