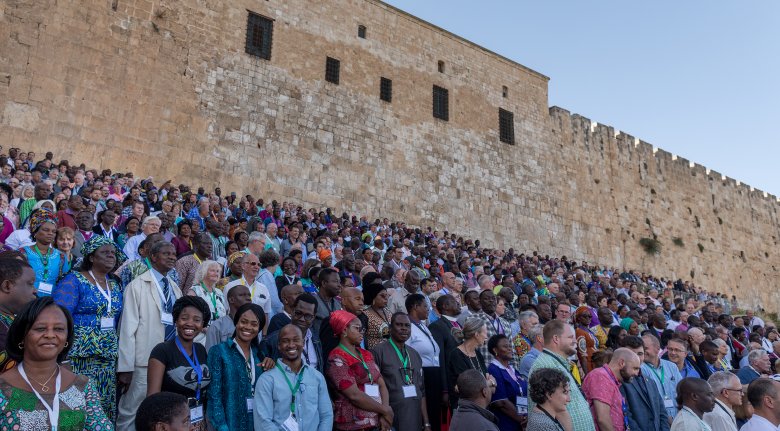 The official conference photograph was taken today in Jerusalem at the iconic location of the Southern Steps of Temple Mount.  Getting 2,000 delegates, speaking a myriad of first languages, some more sure-footed than others on the uneven steps, into a position where each could be seen was “interesting”. The temple steps are around half a furlong in length and up to 35 steps deep but they were packed.

One of the photographers, putting a misty eye to his viewfinder, rejoiced in the problems he was facing. The problems were a blessing to him for they were borne out of God’s blessing of the GAFCON movement: he had also been behind his camera at the first GAFCON ten years ago and he had to fit twice as many people in this time. The logistics had been months in planning- it is not realistic for security reasons to put up a drone here in Jerusalem. In 2008 it had been possible to just perch the photographer on the top of a wall, this time an enormous remote-control boom was required to acquire the right perspective. A whole team of technicians were doing all manner of extremely important, unfathomable things.

It would, of course have been possible to take the photograph in a much easier location- perhaps the auditorium- but that could never have been the same as standing on the steps where Jesus and his fellow pilgrims and worshippers trod on their way into the temple. This was Jesus’ route to sitting down in the temple in order to declare, “Today the Scripture has been fulfilled in your hearing”- there is ancient history here but also, for the Gafcon movement, recent history. Although the official photograph at GAFCON I in Jerusalem was taken at the Mount of Olives it is pictures taken at the Mount that have become part of the institutional memory of Gafcon.
And so the location mattered- it spoke of a movement still absolutely committed to the things of GAFCON I but not constrained by them and looking to the next five years…but also to a future which is much more real and substantial.

But it wasn’t just a photo to look at. Soon after it was taken the sound of the 2,000 singing “Amazing Grace” and reading Psalm 122 echoed off the walls and reverberated in the valley. The delegates reflected that this was where the Apostle Peter preached and where 3,000 were baptised on one day.

The temple the steps lead to is mainly ruined…no it is not…it is glorious… “…for the temple he had spoken of was his body”. It has been remarkable to spend time in this city but delegates to GAFCON are now looking to next five years and beyond that to the future that is far more real when each can say, “…I saw no temple in the city, for the its temple is the Lord God Almighty and the Lamb.