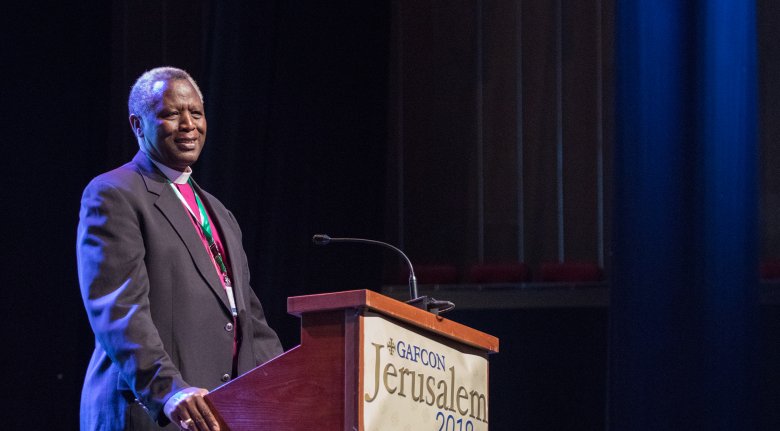 After being led in praise again by the magnificent choir and skillful band, we followed the Church of Uganda rite of Morning Prayer. This included the reading of the text for the morning, Luke 23:50-24:12, and saying Psalm 130 together, with its strong theme of waiting on the Lord.

Bishop Tito Zavala from Chile spoke from Luke’s account of the burial and resurrection of Jesus. He began with an English translation of an Easter acclamation in his native Spanish:

Who lives? Jesus!
To his name -  Glory!
To his people - Victory!

From Luke’s account he showed that the resurrection gives two perspectives: firstly, a big picture of the future. “We are going to be in the new Jerusalem with the Lord, because Jesus is risen”. Secondly, a microscope on our hearts. Encounter with the risen Christ reveals our sin, and says to us “you must change”.

The apostles did not witness Jesus emerge from the tomb, but received the good news about the resurrection. Like them, the church has received the message, and must proclaim it faithfully, teaching new believers to fight against Satan, sin and the world.

Bishop Zavala asked: Are churches in maintenance mode or mission mode? Do we talk about mission and not do it? “If I see your budget I know where your heart is.” Church decisions for maintenance sometimes prevent mission. “Don’t be distracted”, he urged. “We have been called to provide testimony of the risen Jesus – we must do it.”

After a break for refreshments, delegates gathered back in the auditorium.

Laurent Mbanda, Archbishop of Rwanda, began by warning against corruption, and the temptation for church leaders of receiving money from compromised sources, and losing their identity as a result. “We must not be afraid to say: keep your money  - we have Jesus and will proclaim him!” he said, to applause.

He then reminded us that though the world is lost in sin, God loves it enough to have sent his Son for the salvation of people from all the different people groups and nations in the world.

The Archbishop was followed by Jason Mandryk, Direction of Operation World, a trusted organization researching statistics on world mission to assist in mobilizing the church for the Great Commission. In an information-packed and stirring presentation, Jason showed that despite the rise of secularism, religious belief is also on the rise, which means in some cases, openness to the gospel, but in others, increasing resistance, and even violence against believers.

There are other huge challenges in the world today, such as poverty and inequality, conflict and migration. But the church has continued to grow: while in 1980 the number of bible-believing Christians in the global south was the same as those in the north/West, today it is five 5 times more. So the idea of Christianity as the 'white man’s religion' is a myth. The majority of missionaries today are female and from the global south. There are more than 1000 missionaries to the UK from other countries. “Given the spiritual state of the UK I am praying for at least 1000 more!” said Mandryk.

He concluded: History belongs to the intercessors because nothing less than a miracle will be required for the global making of disciples. Archbishop Mbanda concurred:
“The task is huge, so we won’t be out of a job any time soon.”

Two brief presentations followed, giving examples of mission in practice; in south east Asia, where the Diocese of Singapore oversees evangelism and church planting in seven surrounding nations, and in England where a new form of Anglicanism outside the Church of England, validated by Gafcon, is emerging. “Pray for a new generation of Anglican leaders connected to Gafcon who will work sacrificially”, said Lee McMunn. “Could God be calling some from around the world to plant churches in England?”