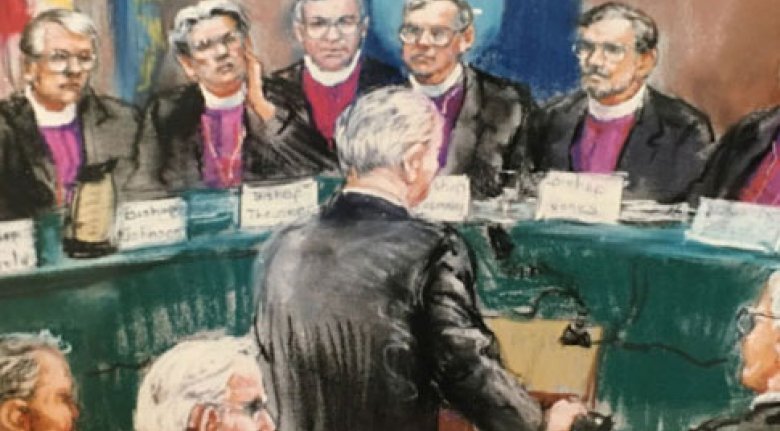 (Pictured above: the trial of Bishop Walter Righter, 1996)

The Anglican Communion’s Primates (the leaders of each province) imposed “relational consequences” on The Episcopal Church just a few weeks ago. One of those consequences was that The Episcopal Church could not vote during the upcoming Anglican Consultative Council meeting on matters pertaining to “polity and doctrine.” Today, those consequences are proving themselves worthless faster than the Primates could have anticipated.

At the conclusion of the January Primates’ meeting, Michael Curry, the Presiding Bishop of The Episcopal Church (TEC), remarked that TEC incurred “consequences” for having changed the doctrine of marriage – and he added that it was a fair assessment on the part of the primates because TEC had indeed changed the doctrine of marriage and had no intention of turning back.

But at the February meeting of The Episcopal Church’s Executive Council, Presiding Bishop Curry gave a more nuanced explanation. He told them that he does not consider marriage to be a part of the Church’s “core doctrine”. While Presiding Bishop Curry conceded that other Anglican Primates considered marriage a core doctrine of the Church, he did not share their views. Moreover, the Presiding Bishop stated that TEC will participate fully in next month’s Anglican Consultative Council in Lusaka because “what the Primates said applies to the Primates; it does not apply to ACC.”

For those who’ve been fighting these Anglican battles over the years, the term “Core Doctrine” might bring back some memories.

“Core Doctrine” is a term the Court for the Trial of a Bishop used in the (in)famous trial of Diocese of Newark Assisting Bishop Walter Righter in Stanton et al v. Righter (1996). In 1990, Bishop Walter Righter ordained a man named Barry Stopfel to the diaconate. The Rev. Stopfel was living with his homosexual partner when he was ordained. I’m familiar with the Righter trial as I assisted, in a small way, the prosecution.

Ten TEC bishops brought a presentment against Bishop Righter on two counts: first, for teaching a doctrine contrary to that held by the church (that is, marriage as between one man and one woman only), and secondly for violating his ordination vows to “conform to the doctrine, discipline and worship of the church” by ordaining a practicing homosexual to the diaconate.

In a 7-1 decision on May 15, 1996, the court dismissed the charges against Bishop Righter stating that the Episcopal Church “has no doctrine prohibiting the ordination of homosexuals,” and that Bishop Righter did not contradict the “core doctrine” of the church. It went on to say that “sound and trustworthy biblical scholarship has identified the basic contents of the [core doctrine].” They are:

But this is such thin gruel that one struggles even to imagine what repentance would look like! Repent from what? What will “judgment day” be about? How did Christ rise again—metaphorically? Existentially? Wishfully? Or bodily? How did God in Christ fulfill the scriptures? In fact, what are the scriptures the “core doctrine” identifies as having been fulfilled by Christ? Unlike the 39 Articles, there is nothing here about the content of the Scriptures, their authority for our life and practice, the person and work of Jesus Christ, his death on the cross for our sins, his bodily resurrection, justification by faith in Christ alone, or even the ancient and Catholic Creeds as essential to the faith!

The Court in the Righter case struggled to articulate where we might find this “core doctrine,” and the best it could come up with was that the Chicago-Lambeth Quadrilateral (CLQ) of 1886,1888 is “a reflection of an understanding of core doctrine.” The CLQ is often cited as encapsulating the fundamentals of doctrine among Anglicans and the reference point for all ecumenical discussions. However, its implications are gutted when reduced to “a reflection of an understanding.” What is that but a wisp of an opinion?

Quite bluntly, Presiding Bishop Curry is resurrecting a 20 year old term to further dilute the teaching of the Anglican Communion. The message from TEC is that if it’s not part of the “Core Doctrine” of the Christian faith everyone should agree to disagree and just move on. You see, “core doctrine” is yet another attempt by TEC to refashion Anglicanism into something that is entirely other than Biblically faithful.

This is the problem with the term “core doctrine” and how Presiding Bishop Curry is using it. It can mean anything you want it to mean, or need it to mean, for your purposes. It has no objective standard or rule against which it can be measured—other than the thin gruel the Righter Court stated in its bullet points.

The one thing the Righter Court made absolutely clear is that, according to the leadership of TEC, Anglicanism is NOT confessional:

“We are not a confessional church which has carefully articulated and identified the entire scope of its teaching and the disciplinary consequences for the violation of its teaching… Holy Scripture is the story of our relationship to God. It is not at heart a rule book of doctrine or discipline. It is the foundation on which and by which all doctrine and tradition are to be tested.”

And yet Anglicans all over the world hold dear Article XX of the Thirty-Nine Articles, which states that “It is not lawful for the Church to ordain anything contrary to God’s word written, neither may it expound one place of Scripture that it be repugnant to another.” God’s word written is more than a “foundation” to test doctrine; it is the ultimate standard for our faith and practice, as Anglican theologians from Cranmer to Hooker to Packer have recognized up to the very present.

I’m afraid the handwriting is on the wall. With TEC present, look for efforts at the upcoming ACC-16 to take Anglican identity away from its biblical and confessional roots. Look for an emphasis in the discussion on “The Bible in the Life of the Church” curriculum for watering down of the authority of scripture in favor of the authority of “context.” Look for a renewed discussion of the meaning of “core doctrine”—perhaps even an assignment to the Inter-Anglican Commission on Unity Faith and Order (IASCUFO) to do a study. And then to incorporate its findings into a new round of “Indaba” and “good disagreement” that renders Anglican doctrine without any boundaries at all.

The Rev. Canon Phil Ashey is President & CEO of the American Anglican Council.