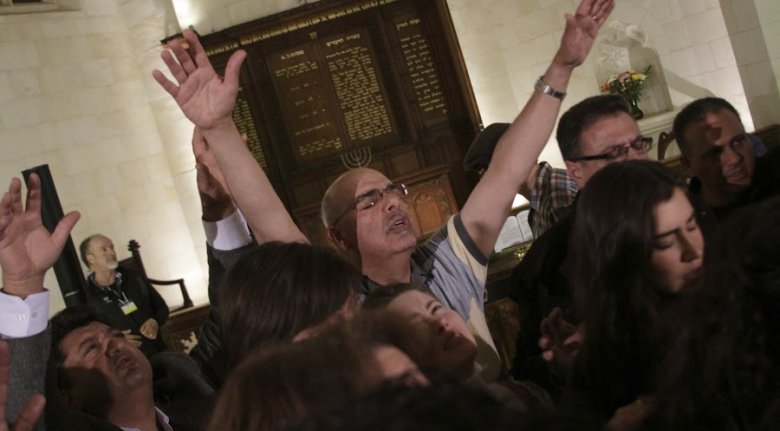 Jerusalem holds a special place in our affections as it was there that the GAFCON movement came to birth in 2008 and we were delighted to have fellowship with Christ Church Jerusalem, which has been a centre of faithful Anglican witness in the Old City since 1849.

We have just received this exciting report of ‘At the Crossroads’, a gathering at Christ Church of some two hundred Middle Eastern believers from radically different backgrounds. United by a common love for the Lord Jesus, they are demonstrating that love in remarkable ways. As one of the leaders has said ‘Christianity in the Middle East is not dying – it is radically changing’

“In that day there will be a highway from Egypt to Assyria … Israel will be the third with Egypt and Assyria, a blessing in the midst of the earth, whom the Lord of hosts has blessed, saying, “Blessed be Egypt my people, and Assyria the work of my hands, and Israel my inheritance.” (Isaiah 19:23-25)

JERUSALEM – Inspired by Isaiah’s vision that the Middle East will be a blessing, Muslim-background followers of Jesus from various Middle Eastern countries met with their Christian and Messianic Jewish counterparts to worship, pray and strategize how to help their war-torn region. They met March 21-23 in Jerusalem’s Old City at Christ Church, the oldest Protestant (Anglican) Church in the Middle East.

Nearly 200 delegates came from Egypt, Jordan, Lebanon, Israel, Iraq, the Palestinian Authority, Cyprus, Armenia, Georgia, Turkey, Iran and Kenya . Attendees worshiped and prayed together in Arabic, Turkish, Kurdish, Hebrew and heard testimonies about the blessings and challenges of following Jesus in this region.

Christian workers from Cyprus, Turkey, Iraq, Lebanon and Jordan shared how they have been caring for some of the millions of refugees streaming out of war-torn Syria and Iraq.

“We did everything wrong culturally, not being Muslims ourselves,” said a pastor from northern Iraq. Still, God has blessed his work of restoring hope in the camps housing Muslim refugees from Mosul. Numerous refugees are responding to this message of hope by asking to be baptized and joining newly established churches.

Several speakers stressed that while the traditional churches are in decline, due to war and extremism, there are new Christian communities forming consisting of Yazidis, Alawites, Turks, Kurds, Sunnis and Shi’ites. In the words of one of the organizers, “Christianity in the Middle East is not dying – it is radically changing.”

Tuesday morning, Rev. David Pileggi, rector of Christ Church, announced the terrorist attacks in Brussels, Belgium, and led attendees in a time of prayer. “This is why what we’re doing here is so important. We’ve tried to confront radical Islam with imperialism and F-16s, and now it’s time to give Jesus a try.”

Due to security concerns the conference was a closed, invitation-only gathering. This is the third gathering held in Israel. At the Crossroads convened in Jerusalem in 2012 and 2014 and in Yeravan, Armenia in 2015.

At the Crossroads was made possible by the contributions of Christians world-wide and numerous international volunteers including the staff of Christ Church Jerusalem.