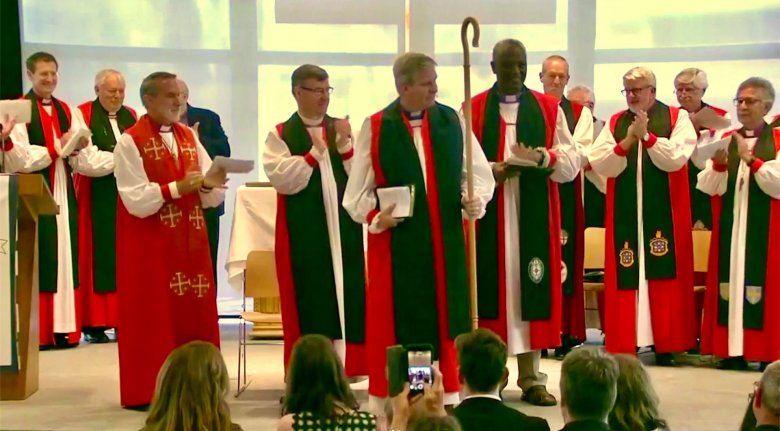 Beloved in Christ Jesus: Greetings in the name of the crucified, risen, and ascended King, our Lord Jesus Christ!

I write to you from Wittenberg, Germany, where Martin Luther began the Protestant Reformation 502 years ago by posting his 95 Theses on the doors of the Castle Church.

This month has seen an historic step in the life of the Anglican Communion. It was my privilege to be the chief consecrator, along with Co-consecrators, Archbishop Laurent Mbanda of the Anglican Church of Rwanda and Gafcon Vice-Chairman, and Archbishop Glenn Davies, the Archbishop of Sydney, as the Revd Jay Behan became the first bishop of the new diocese of the Church of Confessing Anglicans Aotearoa, New Zealand (CCAANZ) at a joyful ceremony in Christchurch New Zealand on 19th October in the presence of a congregation of 650 supporters, with 19 international leaders present and greetings from Anglican Primates around the world.

Archbishop Peter Jensen delivered a powerful sermon in which he reminded us that the Church must always align itself with the unchanging priorities of Jesus and his Kingdom.  He said,

"What we are doing is only right if it is in obedience to the Lord Jesus Christ. We are to make disciples of all nations. This service is about Jesus and the gospel. We are not to become defensive and polemical but set to a grand task of preaching an authentic gospel to be preached throughout this land."

We did not start a new Church in New Zealand. We simply did what we as confessing Anglicans have been doing since the Gafcon moment of 2008 became a movement; we are ensuring that faithful Anglicans can maintain a clear and certain witness to Jesus Christ in contexts where the existing Anglican leadership has effectively made orthodox biblical faith optional.

There are of course orthodox Anglicans in Aotearoa New Zealand who do not yet believe it is time to leave their traditional home.  I admire the strenuous efforts of the CCAANZ leadership to try and preserve good relationships, but their overriding conviction is that the action they are taking is about ‘Not just us, not just now’.

They are convinced that ‘not just us’ means they must look beyond their own immediate parish context to address the shift that has taken place in the wider church. And that this is ‘not just now’; we only have to look at North America and the UK to see that that once the process becomes established, the secular captivity of the Church proceeds relentlessly, and it is only wise to be prepared. Although currently only 12 parishes, it must surely be only be a matter of time before the Canterbury recognised Anglicans in New Zealand follow the example of other liberal provinces by officially changing their canons to permit same sex marriage. CCAANZ is now the future of faithful Anglican witness in New Zealand.

Indeed, the wisdom of ‘not just now’ has already been illustrated by what can only be described as an intemperate attack on the newly formed CCAANZ by Archbishops Donald Tamihere  and Philip Richardson who have issued a statement in which they protest about ‘boundary crossing bishops and their alleged  ‘disrespect for the normal protocols of the Anglican Communion and the lack of courtesy shown to our church’. Here we see a leadership which is quick to protest when it feels that ecclesiastical geographical boundaries are being set aside, but happily condones the breaching of God’s clear moral boundaries taught in Scripture and by the Church for two millennia.

The collect for today, the Feast of Ss Simon & Jude, Apostles, gives us the perspective of the Church through the ages as we pray:

Almighty God, who built your Church upon the foundation of the apostles and prophets, with Jesus Christ as the chief cornerstone; so join us together in unity of spirit by their doctrine, that we may be a holy temple acceptable to you; through Jesus Christ your Son our Lord, who is alive and reigns with you, in the unity of the Holy Spirit, one God, now and for ever. Amen.

This is a prayer that takes us to the heart of the Gafcon movement and true Anglicanism because we find our unity first and foremost in the apostles’ doctrine. When this is abandoned, there is nothing to fall back on except appeals to protocol and ultimately, as we have seen in North and South America, litigation. This is a question which faces the whole Anglican Communion as bishops have to decide if they will attend Lambeth 2020. With the presence in good standing of four bishops in same-sex unions, it legitimizes and normalizes unbiblical marriage and will reshape the Canterbury Communion as a fellowship of churches bound simply by protocol and no longer by the Apostolic Faith.

Let us remember to pray for the renewal and revival of the Anglican Communion so that Christ may be faithfully proclaimed to our nations in the power of the Holy Spirit with a return to adherence to the teaching of Holy Scripture.

Your brother in Jesus Christ,

The Most Rev. Dr. Foley Beach