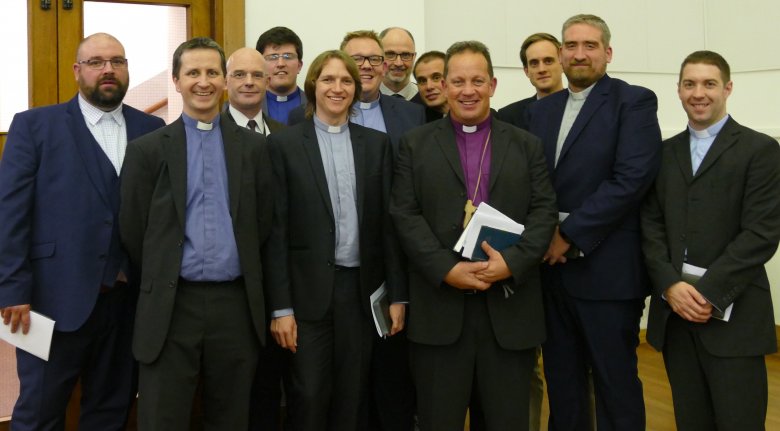 On the 7th December, the first ordinations of the Anglican Mission in England (AMiE) took place in London. AMiE was established by the overwhelming consensus of the Nairobi Conference in 2013 as a mission society in England to help our English brothers and sisters in the massive task of evangelisation.

It is very appropriate that this historic event has taken place in the Advent season.

The second coming of our Lord Jesus Christ in power and majesty is essential to the Christian hope. The last book of the Bible closes with the words of Jesus ‘Surely I am coming soon’ and our joyful response in the midst of our present sufferings and struggles is ‘Amen. Come Lord Jesus!’ (Revelation 2:20).

But at Christ’s return there will also be final judgement. Those of us in the ordained ministry of the Church have a special responsibility to be messengers of the good news of the gospel by which we are saved from that judgement.  To neglect that duty or to distort that message is therefore a very serious matter and brings the messengers themselves under the judgement of God. Where there is no repentance and those who are called to be shepherds of the flock continue to be unfaithful to the Good Shepherd, action must be taken.

Following his consecration as a missionary bishop for the UK and Europe earlier this year at the request of Gafcon UK, Bishop Andy Lines has now ordained nine men to serve in church plants which have already been established and to create new ones.

The purpose is to help re-evangelise a nation that was once one of the greatest centres of Christian mission the world has ever seen, but is now one of the most secular, and its strategy is to do this by planting new churches. Many faithful Anglicans remain within the Church of England, but there is a danger that their work will be compromised or made more difficult if the Bible is no longer upheld as the rule of faith. How can a Church be effective in mission when it has muddled the truth of the gospel? Mission and fidelity cannot be separated.

This was exactly the point made by Mrs Lorna Ashworth, a member of the Archbishops Council (of Canterbury and York) and of the General Synod, when she resigned last month from both, saying that ‘as a corporate body we have become unable to articulate the saving message of Jesus Christ which fully encompasses the reality of sin, repentance and forgiveness – without this message we do not teach a true gospel and people do not get saved.’

This is the road down which the Episcopal Church of the United States (TEC) and the Anglican Church of Canada have led the way. Now that the spiritual crisis in the Anglican Communion is so clearly affecting the Mother Church herself, we need to be very clear on three core values of the Gafcon movement.

Firstly, the Jerusalem Statement and Declaration commits us to working within the Anglican Communion. AMiE is sponsored by Primates of the Anglican Communion and to emphasise this, Archbishop Ntagali of Uganda and myself both recorded video messages of support for the AMiE ordination service.

However, secondly, the Jerusalem Statement and Declaration clarified that the Anglican Communion is not determined simply by relationship with the Archbishop of Canterbury. We are confessing Anglicans and historic ties, however fruitful they have been in the past, cannot be allowed to compromise the truth of the gospel. Consistent with this principle, we recognise AMiE as fully part of the Anglican Communion.

Thirdly, AMiE demonstrates courage. By the grace of God we make the sacrifices that are necessary to proclaim Christ in season and out of season, even when that means leaving the comfort of established institutions as so many in the Anglican Church of North America have already demonstrated.

Advent is a time to remember that the purpose of the Church is to please and glorify God, not men. May God give all of us grace so that one day we will hear those wonderful words of the Lord Jesus ‘Well done, good and faithful servant’ (Matthew 25:23).

The Most Rev’d Nicholas D. Okoh