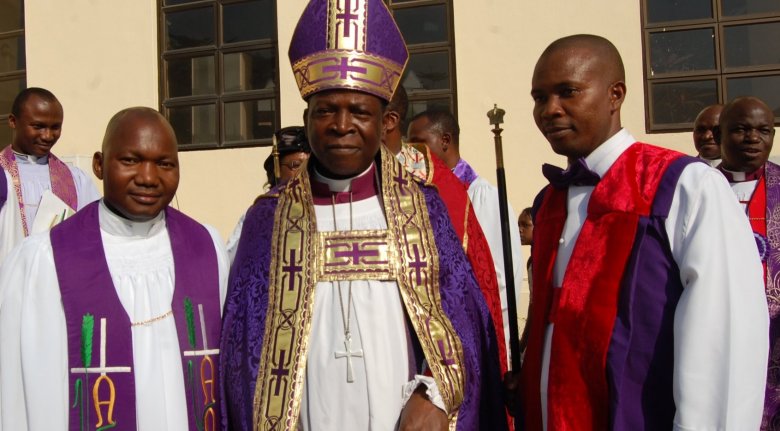 THE MOST REVD. NICHOLAS D. OKOH

Archbishop, Metropolitan and Primate of All Nigeria

My Beloved in the Lord,

MEETING OF PRIMATES OF THE ANGLICAN COMMUNION WITH THE ARCHBISHOP OF CANTERBURY, THE MOST REV’D AND RT HON. JUSTIN WELBY, MONDAY 11 – FRIDAY 15 JANUARY, 2016

Grace and peace from God our Father, and the Lord Jesus Christ.

We thank God for His inestimable grace that strengthens us in His service. To Him be the glory.

The Archbishop of Canterbury, The Most Rev’d and Rt Hon. Justin Welby, invited all the Primates of the Anglican Communion to a meeting in Canterbury to discuss issues affecting our Communion. After some regional and sub-regional consultations with the Global Anglican Futures Conference (GAFCON) and the Global South Groups, it was decided that we should accept the invitation for whatever it was worth, irrespective of the fact that some of our provinces are in impaired relationship with The Episcopal Church (TEC) and The Anglican Church of Canada (ACC) in particular, and other churches that are following their footsteps.

It has been the collective resolution of the GAFCON Group for several years that we shall not participate in any gathering in the Anglican Communion to which TEC and The Anglican Church of Canada (ACC) were invited, until they repented of their erroneous doctrinal and theological postures and practices. However, following the almost unanimous resolution of the GAFCON and the Global South Groups, we decided the invitation.

Attached is the statement of the meeting regarding TEC.

The Anglican Church of Canada (ACC) was not focused on because it claimed that it has not altered its Marriage Canon. However, we know that the Anglican Church of Canada, Scotland, Wales, Brazil and New Zealand are on the way to toeing the footsteps of TEC. We are yet to be convinced that the restrictions imposed on TEC will be implemented. The bottom line, therefore, is that nothing has changed.

As stated in the statement of the meeting attached herewith, ‘for a period of three years The Episcopal Church no longer represent us on ecumenical and interfaith bodies, should not be appointed or elected to an internal standing committee and that while participating in the internal bodies of the Anglican Communion, they will not take part in decision making on any issues pertaining to doctrine or policy’. Furthermore, The Archbishop of Canterbury, The Most Rev’d and Rt Hon. Justin Welby was asked ‘to appoint a Task Group to maintain conversation among ourselves with the intention of restoration of relationship, the rebuilding of mutual trust, healing the legacy of hurt, recognizing the extent of our commonality and exploring our deep differences, ensuring they are held between us in the love and grace of Christ’.

In the meantime, the state of broken communion with TEC and Canada and those churches that are following their bad examples remains in place. Our decision to severe relations was based on their practice of ordaining and consecrating clergy in active homosexual relationship. This is what led to GAFCON, Jerusalem 2008. Reported reactions of some church leaders and members of TEC to the statement of the Primates’ meeting clearly suggest that they are not yet willing to repent of their unbiblical doctrine and practices.

We shall remain fervent in prayers and steadfast in upholding the word of God in the teachings and life of the Church. God’s grace is sufficient unto us.

Yours in His service.

Archbishop, Metropolitan and Primate of All Nigeria