Anglicanism in Spite of Canterbury? 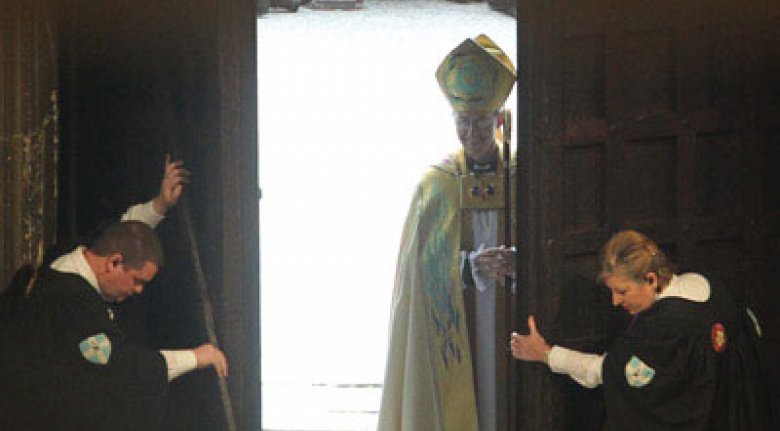 This article by the Rev. Canon Phil Ashey first appeared in the AAC’s International Update

I read with some interest the remarks of the Archbishop of Canterbury, Justin Welby, on the Primates gathering we returned from just a few weeks ago. In his recent address to the Church of England’s General Synod he made a number of significant statements—significant because they are signs of the future that lies ahead for a deeply divided Anglican Communion. You can find his whole address here, but let me focus on three significant statements:

1.“The meeting was set for Canterbury because that would recall to people the way in which Canterbury, and especially its cathedral, represent the center of the Anglican Communion.”

Elsewhere the Archbishop of Canterbury rightly observed: “What are the limits of diversity? Who is in control? British colonial history makes the laying down of edicts by white, middle-class Christians from the Global North, citizens of the former colonial power in many places, a process that is rightly deeply resented.” But in claiming himself and Canterbury as the center, is he not contradicting himself and simply reasserting continuity with that British colonial past? Shouldn’t we be wary of a leader who says that we should avoid old “colonial ways”—and then insists that his See, Canterbury, is the hub around which the Communion revolves?

In reality, it was the Global Anglican Future Conference (GAFCON) and Global South Primates who had to take leadership in this Primates gathering to get any “limits on diversity,” and any “relational consequences” at all upon The Episcopal Church (TEC) for its actions since 2003 in unilaterally violating Biblically teaching on human sexuality, along with Lambeth Resolution 1.10 (1998).

2. “To be part of the institution of the Anglican Communion a Province must be in communion with the See of Canterbury.”

Resolution 49 of Lambeth Conference 1930 says that relationship with Canterbury is the condition for being within the institution of the Anglican Communion. Yet what the Archbishop of Canterbury ignores is all the Lambeth Conferences which preceded 1930 and robustly reaffirmed that communion was around a shared confession of faith, doctrine and order. He ignores the Chicago-Lambeth Quadrilateral (Lambeth 1888), which provides for a “common faith and order” as the basis for reunifying the Church–without any reference to the See of Canterbury. This agreement around the Bible as the revealed word of God, the Nicene Creed as the sufficient statement of the Christian faith, Baptism and the Lord’s Supper as the two sacraments instituted by Christ, and the “historic Episcopate” locally adapted remains the Anglican benchmark for communion. It is all about a shared confession of faith and order—not relationship with Canterbury.

Even the Lambeth Conference 1930, in Resolution 48, recognized communion as being based on a shared confession of faith and its essentials:

“The Provinces and Patriarchates of the first four centuries were bound together by no administrative bond: the real nexus was a common life resting upon a common faith, common sacraments, and a common allegiance to an Unseen Head…”

Well before 2003, that sharing of a “common faith” was shattered by the teachings of the Episcopal Church and other Anglican leaders in the Global North on such essentials as the resurrection of Jesus Christ, the Virgin Birth, the Creeds and the trustworthiness of the Bible. It is discouraging that Archbishop Welby, like his predecessor, seems unwilling and unable to acknowledge that we now live in an Anglican Communion where there is no common understanding of Christian essentials among many of the Anglican Churches in the Global North. As theologians like Paul Avis have noted, this default to an ecclesiology based on relationships rather than a common faith is really just an accommodation to Western culture and doctrinal incoherence among Anglicans in the Global North. Relationships cannot hold the Communion together. Only the Jesus of the Scriptures can hold us together as a Church.

3. “The Anglican Communion finds its decisions through spiritual discernment in relationship, not through canons and procedures.”

It is very discouraging that the Archbishop of Canterbury seems unwilling and unable to affirm the Holy Scriptures as the ultimate rule and standard of faith and practice—and therefore as the basis for defining “the limits of Anglican diversity.”

Instead, he spoke of a way forward in which he, seemingly, invites Anglicans to replace Scripture, tradition and reason with a new trio of authorities:

“We rightly talk of scripture, of tradition and reason; but in the tension in which we live in a Global Church, there is another trio – of freedom, order and human flourishing – set out by Tim Jenkins in an article in 2002. As a Communion (and as churches) where authority is found in discernment, and expressed in relationship, this trio is of huge importance. It anchors us in the breaking down of barriers, in facing each other, in the beauty of human interaction in love.”

Under this new trio of authority, our focus will be on “human flourishing,” and on “setting free those who are bound by rules which Jesus could never have imagined, nor Paul… [rules] which have emerged out of a desire for power rather than the expectation of the kingdom of God.”

I am hearing echoes of the same ad hominem arguments I heard for so many years in TEC—ad hominem attacks on those who sought in good faith to be faithful to what the Bible actually says. These attacks hardly ever addressed what the Bible actually says. These ad hominem attacks swept Biblically faithful teachings aside because they were “rules which Jesus could never have imagined,” rules which “emerged out of a desire for power.”

The most charitable thing I can say about Archbishop Welby’s new trio of authorities is that it may be a bit premature to replace Hooker’s “Scripture, tradition and reason” with Jenkins “freedom, order and human flourishing” as the basis for determining the limits of Anglican diversity. “Freedom, order and human flourishing,” are not the Biblical tests. They are not confessional. They are not catholic. They are not evangelical. I don’t even remember hearing them in ALPHA.

Should the Archbishop continue on the path he’s going down, it may be necessary to imagine an Anglicanism in spite of Canterbury.

The Rev. Canon Phil Ashey is President and CEO of the American Anglican Council.