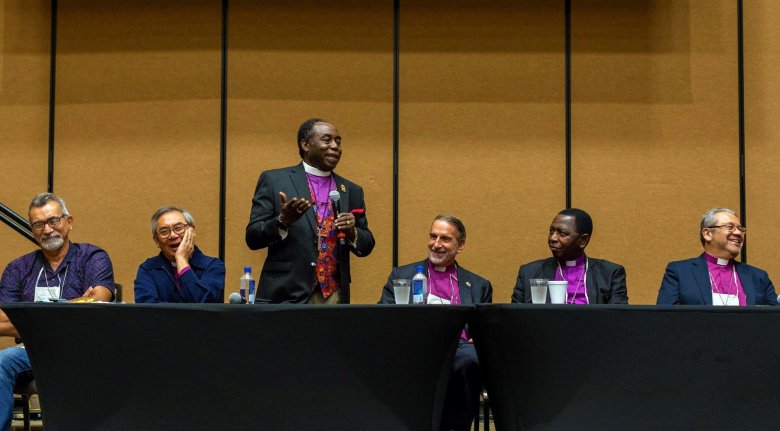 One decade ago the Anglican Church in North America (ACNA) was inaugurated in Plano, Texas following the first Gafcon Jerusalem Conference in 2008. In mid-June, the ACNA returned to its birthplace and much like that original Assembly, bishops and Primates from the Global South with their strong commitment to proclaim Christ faithfully had a prominent role. The Gafcon Chairman, Archbishop Foley Beach, who was re-elected to serve a second term as ACNA’s archbishop and primate, called the Assembly to, “…go and make disciples.” The theme of the conference was “Disciple,” and the newly released and revised Book of Common Prayer (BCP) was presented as a tool in the fulfillment of Christ’s Commission to make disciples of all nations.

Discipleship was the ongoing theme throughout the conference, which was emphasized by the Primates in a breakout session along with the plenary speakers representing an ecumenical sampling from across the spectrum. Speaker James Bryan Smith, encouraged a focus on spiritual disciplines for God’s grace to move within us, “…creating space for God to act.” Ravi Zacharias shared many stories reflecting on Joseph’s dependence on God and his consistent character while in Egypt. Southern Baptist, Russell Moore, addressed how we should respond to the cultural headwinds of secularization. His charge was to, “Neither accommodate what any culture at the moment will allow, nor be constant outrage machines,” instead, “Love people to whom we speak knowing that the Holy Spirit and the blood of Christ are enough for any of them.”

Rwandan Archbishop Laurent Mbanda recalled the Rwandan genocide killings in 1994 where most of the killers claimed a Christian faith, with even some pastors involved in the killings. The question was, how could this happen? Mbanda assessed that, “There had been many converts, but they had not been mentored, equipped and discipled to live like Christ. A renewed understanding and commitment to our call to the Great Commission was needed.” Mbanda challenged the assembly by asking, “Are you in, or are you out? Are you joining, or are you just going to watch and observe? It is our time, and the Lord has given us an opportunity, let us take advantage of it. Let us use it for his glory. Let us proclaim Christ unashamedly.”