A Communiqué from the Gafcon Primates Council 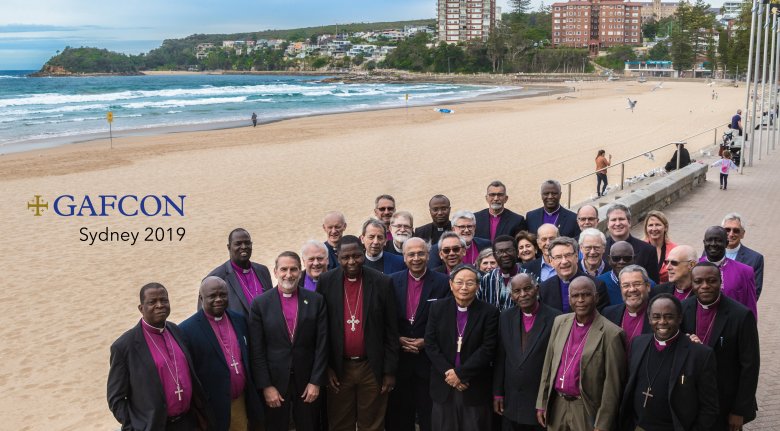 Proclaiming Christ Faithfully to the Nations:

A Communiqué from the Gafcon Primates Council

Unless the LORD builds the house, those who build it labour in vain.
Unless the LORD watches over the city, the watchman stays awake in vain. ~ Psalm 127:1

As Archbishops and Primates of the Anglican Communion we came to Sydney, Australia, for prayer, worship, and fellowship.  We were joined by the leaders of our branches, and worked together to support the ministry of our people.  Our provinces and branches represent 50 million of the 70 million active Anglicans of the Communion.  We give thanks for the generous hospitality of Archbishop Glenn Davies and the Anglican Diocese of Sydney who hosted us.

Our primary focus this week has been upon the great tasks of mission and evangelism. As a global fellowship we are uniquely positioned to support one another in ministry to a world where mass immigration and globalisation are reshaping our countries.  There are billions who have never heard the Good News of Jesus Christ, and the field is ripe for the harvest.  In this new world every believer has a role in preaching Christ faithfully to the nations.  There are even more who have heard, but not understood.  In many situations the main challenge is not ignorance, but unbelief.  We ask you to join us in prayer for a fresh outpouring of the Holy Spirit’s power to break into the hearts and minds of those who have not yet believed.

Our time together began on Monday evening as we gathered for dinner.  We gave thanks for the sacrificial work of our outgoing leadership team: Archbishop Nicholas Okoh of Nigeria (Chairman), Archbishop Stanley Ntagali of Uganda (Vice Chairman) and Archbishop Peter Jensen of Australia (General Secretary).  By the grace of God, during this last season of our life together their steady hands have guided us, and because of their faithfulness we have seen the movement grow from strength to strength.
We installed Archbishop Foley Beach of North America as the new Chairman of the Primates Council and gathered around him for a time of prayer and commissioning.  This was the first Council meeting for Archbishop Ben Kwashi of Nigeria, the General Secretary, who took up this post in January.  Archbishops Beach and Kwashi shared the chairing of the meeting, and we also elected Archbishop Laurent Mbanda of Rwanda to serve as Vice Chairman of the Council.  Please join us in prayer as they lead us forward in the years to come.

In addition, it was our joy to welcome the Most Rev. Jackson Ole Sapit, Archbishop of Kenya, onto the Primates Council.

Our common commitment to the gospel provides us with the energy and freedom necessary for mission.  Our grassroots networks are doing exciting work in nine diverse areas and we heard updates on the progress of each of them. We rejoice to see the networks working together to fulfil our commitment in Jerusalem last year ‘to proclaim Christ faithfully to the nations’.
Our work in all its variety is undergirded by prayer through the daily topics provided by the Prayer Network and we rejoice to see how the networks are already bringing fresh impetus. In New Zealand, the Lawyers Task Force has advised on the Constitution and Canons of a new Anglican diocese, while mission strategy has been enriched in both New Zealand and Ireland by consultation with the Church Planting network.

In Central and South America, the Church Planting Network is working with the Anglican Church in Brazil to establish new churches in areas beyond Brazil where Anglican witness has been compromised.
We see the Global Mission Partnerships Network being a catalyst for new evangelistic initiatives, especially in East Africa. Leadership around the Communion is being strengthened through the Bishops Training Institute which now has a network of over one hundred bishops who have benefitted from these training conferences.
Through the Sustainable Development Network, working together with partner Anglican agencies and local church leadership, generous funding has been raised for emergency relief and recovery in Mozambique following the Cyclone Idai disaster in March. We were also pleased to learn that the Youth and Children’s Ministry Network has recently launched an online platform for the sharing of teaching and worship resources to equip leaders who have the vital task of passing on the faith to a new generation.
Earlier this year some of us met in Dubai and had the joy of sharing fellowship with faithful Anglicans in restricted situations.  They requested that a network to support those in similar circumstances be developed.  We have enthusiastically affirmed this desire and the Suffering Church Network will enable us to share the burdens of those who show such resilience and even joy in the face of severe trial.
We are deeply distressed and saddened at the recent horrific attacks in Sri Lanka specifically targeting Christians, and the attendant injuries and tragic loss of life. We stand in solidarity with our brothers and sisters in Christ who have been attacked. We also pray for those who perpetrate such attacks, and pray that they come to repentance. We give thanks for the robust response of the Sri Lankan Government and their measures to protect all peace-loving citizens of the island nation.

We were reminded of the words of Jeremiah 6:14, “They have healed the wound of my people lightly, saying, ‘Peace, peace,’ when there is no peace.” Last year in Jerusalem our delegates urged us not to attend Lambeth 2020 if godly order in the Communion had not been restored.  They respectfully called upon the Archbishop of Canterbury to effect the necessary changes that fell within his power and responsibility.

We have not yet received a response from the Archbishop of Canterbury.  We note that, as it currently stands, the conference is to include provinces who continue to violate Lambeth Resolution I.10 thereby putting the conference itself in violation of its own resolution: failing to uphold faithfulness in marriage and legitimising practices incompatible with Scripture. This incoherence further tears the fabric of the Anglican Communion and undermines the foundations for reconciliation.

On the one hand, we have no interest in attempting to rival Lambeth 2020.  On the other hand, we do not want our bishops to be deprived of faithful fellowship while we wait for order in the Communion to be restored. Therefore, we have decided to call together a meeting of bishops of the Anglican Communion in June of 2020. The conference will be primarily designed for those who will not be attending Lambeth, but all bishops of the Anglican Communion who subscribe to the Jerusalem Declaration and Lambeth Resolution I.10 are invited to join in this time of teaching, worship, and fellowship. We shall meet June 8-14 in Kigali, Rwanda, and be hosted by Archbishop Laurent Mbanda and the Anglican Church of Rwanda.

We received updates from each of our Gafcon branches. A common thread throughout these reports was the comfort that each has expressed in knowing that they are not alone.

New Zealand
With the Anglican Church of Aotearoa, New Zealand and Polynesia’s recent General Synod decision to permit the blessing of same-sex marriages and civil unions we give thanks for the individuals and churches that have remained faithful and courageous in these islands. We support those who, in good conscience, feel unable to remain within a Church that has made such a decision. We affirmed their creating a new diocese and recognised them as authentically Anglican. This new diocese will keep them within the Anglican Communion and they will relate directly to Gafcon. We also affirmed the consecration of a new bishop to oversee and support the new diocese.

Europe and the United Kingdom
The Anglican provinces in this region have become confused and compromised by the waves of cultural change.  We are encouraged by the growing membership of Gafcon UK.  As we said in 2017, “ We believe that the complexity of the current situation in Europe does not admit of a single solution. Faithful Christians may be called to different courses of action. We bless those whose context and conscience have led them to remain and contend for the faith within the current structures.”
At the same time we have approved the creation of a missionary district for Europe to further the work of the gospel by meeting the needs of the growing number of Anglican congregations outside these provinces.

Australia
The religious freedom issues that have affected South Africa have also affected the secular and religious life of Australia.  The General Synod of the Anglican Church of Australia will meet again in 2020, and it is likely that some will push to redefine marriage. Gafcon Australia is working to maintain the biblical faithfulness of their province on both the issues of sexuality and church order. We also heard encouraging reports of the fellowship between Gafcon Australia and FCA New Zealand as they have supported one another over the last year.  Their partnership has been a model of regional fellowship that we commend to the wider movement.

Ghana
In 2008, the Primate of West Africa, the Most Rev. Justice Offei Akrofi, was one of the founding members of the Gafcon movement.  Members of the Church of the Province of West Africa have been present at each of the Global Anglican Future Conferences.  The Diocese of Sunyani has now taken the lead in developing the official Ghanaian branch of the movement.  A seven member board has been formed under the leadership of Bishop Festus Yeboah Asuamah.

Ireland
The Irish branch, launched in Belfast just over one year ago, is focusing its efforts on theological education and church planting.  In December, over 50 clergy and ministry trainees attended a 48 hour Residential on Reformation Anglicanism, and in early 2019 over 180 attended a three week course in Biblical Theology.  The foundations for a new church planting initiative are currently being put in place and specific details about personnel and location are due by the end of 2019. Preparations are also being made for a large Bible Convention in April 2021 for laity and clergy.

Women in the Episcopate

The Primates received the Interim Report of the Task Force on Women in the Episcopate, the result of a four-year comprehensive study, and affirmed its recommendation that “the provinces of Gafcon should retain the historic practice of consecration only of men as bishops until and unless a strong consensus to change emerges after prayer, consultation and continued study of Scripture among the Gafcon fellowship.” We authorised the Task Force to continue this consultation.

Gafcon is a movement “to guard and proclaim the unchanging truth in a changing world.”  As we heard this week, many around the world are being tossed back and forth by waves of confusion, and blown by the wind of the latest, fashionable, false doctrine.  Many are in desperate need of Jesus, who is the only one who can bring salvation. Please lift up his Church daily in your prayers, pray for us as we seek to lead, and join us in proclaiming Christ faithfully to the nations.

The Most. Rev. Stanley Ntagali
Uganda

The Most. Rev. Stephen Than Myint Oo
Myanmar

The Most Rev. Miguel Uchoa
Brazil

The Most Rev. Tito Zavalla
Chile