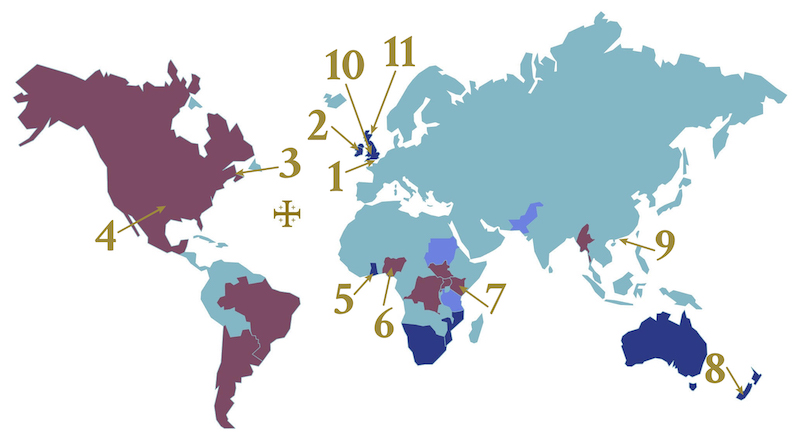 On 7th February, the Archbishop of Canterbury invited 30 newly consecrated bishops to Lambeth Palace for an annual 10 day residential to teach them about the role of a bishop. The bishops travelled from all over the world, but the newly “married” bishop from Canada, Kevin Robertson (featured in Q1), who is in a same-sex marriage, also attended the training.  Praise God that Gafcon’s Bishops’ Training Institute (BTI) gives bishops a sound biblical alternative as they begin their ministries.

Gafcon Ireland held its second TheologyIreland training conference to equip clergy and laity to better read and understand the Bible. In 2018 Dr Peter Orr ran the foundational “Biblical Theology” course, introducing the whole Bible’s storyline, and in January 2019 Peter returned to run this course again for those new to TheologyIreland, and to build upon this foundation for those students who attended last year. Peter ran a course for Laity on “Preaching from Luke’s gospel” and Saturday sessions dealing with various contemporary issues.

3. Same-sex partnered man to be the new Bishop of Maine USA

The Rev. Thomas James Brown was voted in to be the next bishop of Maine and is set to be consecrated in June 2019. He has been married to the Revd Tom Mousin since 2001. He will be the first openly gay Episcopal bishop in Maine and the third ever elected in the US.

In mid-January, 24 gay and lesbian couples had their ‘marriages’ or civil unions blessed in two churches in Dallas, USA. The two services were held to bless couples who couldn’t marry in the diocese, because the diocesan bishop opposes same-sex marriage. During the ceremonies the couples renewed their vows, were blessed in holy matrimony and had their rings blessed. Bishop Gene Robinson, who was the first practising gay bishop to be consecrated by The Episcopal Church (TEC, USA) spoke at both services. He said, “Today feels like a miracle and that’s because it is. Thanks be to God.”

Over recent months Gafcon has been developing a branch in Ghana, and on Ash Wednesday, 6th March, it was officially launched at a meeting attended by some 70 people under the leadership of the Bishop of Sunyani, the Rt Revd Dr Festus Yeboah-Asuamah. Bishop Festus has a long-standing connection with Gafcon, having been a member of the Gafcon Theological Resource Group which produced the commentary on the Jerusalem Declaration 'Being Faithful: The Shape of Historic Anglicanism Today'.

6. Christians continue to suffer in Nigeria

In February Anthony Idris Jata’u, a priest from the Anglican Diocese of Sokoto, Nigeria was abducted and 3 days later found dead. The kidnappers took his wife, three children and two sisters-in-law and have been holding them to ransom, demanding 10 million Nigerian Naira (approximately US$27,000) for their release. The attacks on Christians in Nigeria continue by Boko Haram and Fulani Herdsman. In a statement to Nigeria’s re-elected President, Muhammadu Buhari, Gafcon’s General Secretary Archbishop Ben Kwashi said, “The government has been unable to provide security for the poor. The government must rise to its responsibility to mete out justice and save lives.”

On 22 March the Court of Appeal in Kenya overturned a decision that rejected a 2015 application from the National Gay and Lesbian Human Rights Commission from registering as an NGO. Under Kenyan law NGOs must obtain a license from the state to operate. The 3-2 decision by the appeals court upheld a lower court ruling which overturned the administrative ruling. The Most Rev. Jackson Ole Sapit said, “The Church does not support the ruling on LGBT association. This is not only unconstitutional but also against the teachings of God.”

The Anglican Church of Aotearoa, New Zealand and Polynesia (ACNZAP) voted last year to bless same-sex marriages, and in February 2019 one such blessing was attended by the bishop of Christchurch, Peter Carrell. Bishop Carrell said "I gave my blessing and approval for it to take place and this is part of our journey as a diocese.” So far six parishes have left the ACNZAP and another six clergy have resigned. They are in the process of putting together a new constitution and canons to form an extra-provincial diocese which is being put forward to the Gafcon Primates Council in April.

It has been confirmed that the 17th meeting of the Anglican Consultative Council (ACC-17) will take place in Hong Kong from Sunday 28 April 2019.  One of the items to be put forward to the ACC is a new educational resource, written by an international theological working group: “God’s Justice: Just relationships between women and men, girls and boys”, but involved in the working group are a number of revisionist theologians including Gerald West who runs the Ujamaa centre – an organisation which includes LGBT lobby groups in its supporters.

The newly appointed Archdeacon of the Isle of Wight, Peter Leonard, is currently Canon Chancellor at Portsmouth Cathedral, and is also the chair of OneBodyOneFaith, an active LGBT+ group, and a member of Isle of Wight ‘Pride’. He was previously married with 2 children but has since been divorced and is now with his male partner.  He will take up his new post soon after Easter.

On 17th January, the congregation of Westhill Community Church in Aberdeen, Scotland, voted in favour (87% to 13%) to leave the Scottish Episcopal Church (SEC) because Biblical orthodoxy has been compromised. In June 2017 the SEC voted to allow same-sex marriages, becoming the first major church in the UK to do so. The Rector of Westhill Community Church, Canon Ian Ferguson said, “Our church did not feel they could go on the trajectory SEC are going and they wanted to maintain their sense of biblical authority.” The church has received support from Gafcon Provinces including Nigeria, Uganda, Sydney and the Anglican Church in North America.