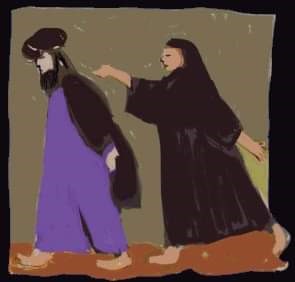 As followers of Jesus, forgiven and redeemed by His blood, and already embarking on the Eternal life we will experience more fully in Heaven, we are instructed by Paul to be “imitators of Christ.” That instruction goes for our responsibility to be advocates for persecuted brothers and sisters as well. Jesus is the greatest model of advocacy for us because He is The Advocate.

The most prevalent New Testament references to advocacy are Christological and Pneumatological – speaking of Jesus Christ and of the Holy Spirit. “Advocate” is the English translation of the Greek parakletos, or “paraclete.” The first reference is John 14:16 where Jesus says, “I will ask the Father, and He will give you another Helper, to be with you forever.”

In his 1989 Catechesis on the Holy Spirit as Advocate, Pope John Paul II said:

Parakletos means literally: “one who is called or appealed to” (from para-kalein, “to call to one’s assistance”). He is therefore the defender, the advocate, as well as the mediator who fulfills the function of intercessor. When Jesus in the upper room, on the eve of His passion, announced the coming of the Holy Spirit, He did so in the following terms: “The Father will give you another Paraclete.” These words indicate that Christ Himself is the first Paraclete, and that the Holy Spirit’s action will be like that of Christ and in a sense prolong it. . . Jesus Christ, indeed, was the “defender” and remains such.

Jesus is the first Paraclete or advocate. The parable the Lord told about the widow and the judge give us insight into His passion for justice, an important element of advocacy for the Suffering Church.

In the parable, the widow has been wronged. She keeps appealing for justice, but the judge is unjust.  Eventually though, she wears him down. He gives in, does the right thing, defends her, and gets justice for her.

We focus on the idea in the parable that we should always pray, and not give up, because God is a very Just Judge. But a key word in the text is JUSTICE. Jesus uses the word “justice” four times in seven verses. He gives no indication that the widow is at fault at all.

In an essay on “The Ministry of Advocacy,” author Ray Ortland says:

Advocacy turns the abstract ideal of justice into a practical reality for an accused person when everything is on the line. To hold back from advocacy, to keep a low profile until the storm blows over, to keep quiet, to adopt a “wait and see” neutrality when an accused person justly needs courageous advocacy – to stand by in silence when we could make a real difference for a person under fire is cowardice.

Ouch! There are so many cases of injustice towards our persecuted brothers and sisters. There are false accusations that should be disproved. There is a need for that practical reality of justice for accused Christians. We cannot hold back; we cannot keep a low profile (not when those being persecuted are saying it is time to speak out!); we cannot adopt a “wait and see” neutrality, when all of Heaven is “waiting” to “see” if we will fulfill our God-given mandate!

In the United States where I live, we recently saw an example of advocacy for an unjustly accused Christian. Andrew Brunson, pastor for 23 years of Resurrection Church in Izmir, Turkey, was unjustly accused of aiding “terrorists” in a failed coup against President Tayyip Erdogan. He was arrested and jailed for the false allegations on October 7, 2016. Less than a year later, he was sentenced to three consecutive life sentences in solitary confinement.

The bogus charges against the innocent pastor, husband, and father sparked outrage among Christian clergy, lay leaders, and the Trump Administration. The U.S. Ambassador-at-Large for International Religious Freedom Samuel Brownback traveled to Turkey to support Brunson during one of his court hearings.  There could be no more “practical reality” than the United States government – right up to the level of President Trump – achieving justice for Brunson by pressuring the Turkish Government to release him in October 2018.

We also saw opposite, in 2014, when the US government held back from advocacy for Sudanese Christian wife and mother Meriam Ibraheem for months. Ibraheem, imprisoned and sentenced to death for apostasy, needed “courageous advocacy.” But the US Embassy in Sudan declared the situation “an internal Sudanese matter” (even though Meriam was married to a South Sudanese naturalized U.S. citizen). It took outrage from concerned citizens around the world to push for the action needed to “make a real difference for a person under fire” and to provide justice for Meriam. Let’s purpose to do all that we can, by the grace of God, to make a real difference for our brothers and sisters, victims of injustice, and under fire.

Read the Luke 18 parable and mark the word "justice" when it appears. Think about the cry of persecuted Christians for justice. Note today’s Daily Office Psalm, 43, begins, "Give judgment for me, O God, and defend my cause against the ungodly people..."

Visit Pastor and Mrs. Brunson’s public Facebook Page. You can also hear his song of testimony and praise to God, Worthy of My All. Other Christian victims of injustice, such as Leah Sharibu (Nigeria), Mary Mohammadi (Iran), and Youcef Nadarkhani (Iran) need our advocacy. So many others whose names are not as familiar to us. Do your own research, find an imprisoned Christian that is not as well-known as these, and become his/her champion, advocate, and defender!

Heavenly Father, we come to You in the Name of Jesus, our Advocate and our Defender. How awesome it is to know that we are loved by You, Holy God. We can sing with the hymn, “Before the throne of God above I have a strong and perfect plea. For the God the Just is satisfied to look on Him and pardon me.” Give us the grace to raise a tireless plea for our persecuted brothers and sister. In our Advocate’s Name. Amen.