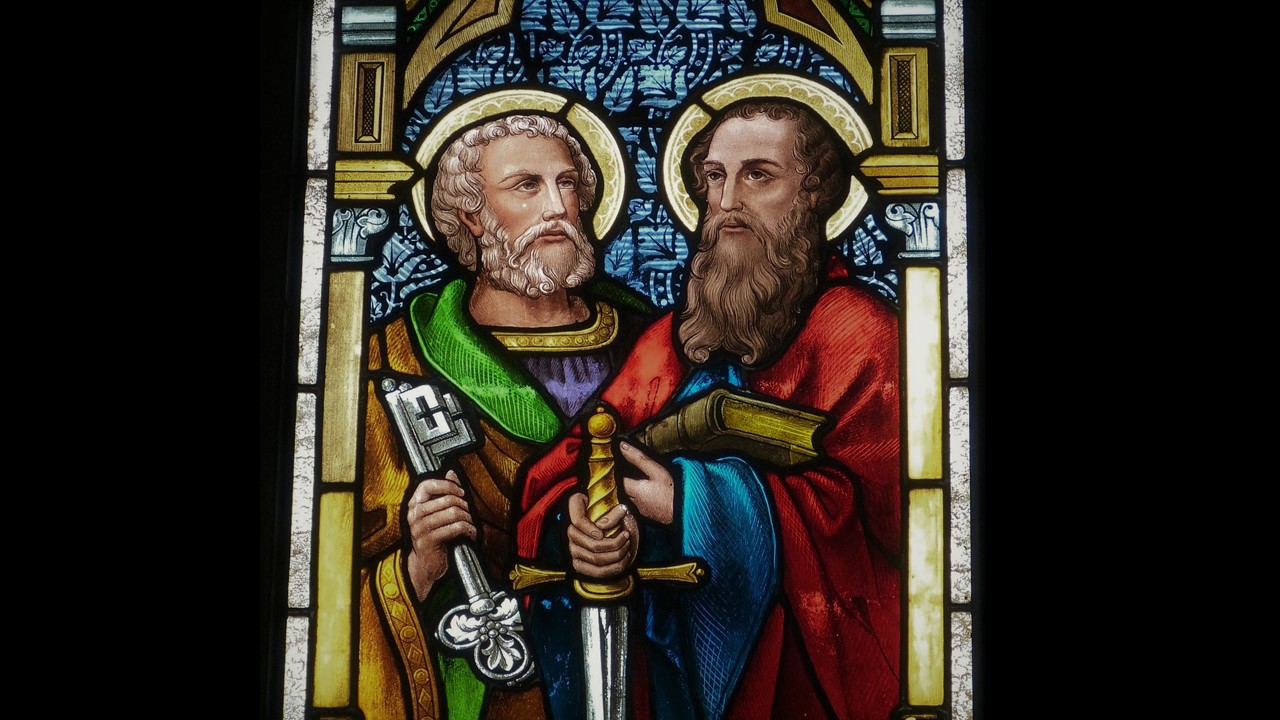 The readings are in Matthew 16:13-20 and Galatians 1: 11-17. In Saints Peter and Paul, the Church has two of its most prominent pillars. Here are men possessed by the Gospel who are yet quite different from one another in background, temperament and education. Peter is an unlettered fisherman whose accent gives him away (Acts 4:13, Matt. 26:73). Paul is probably the best educated of the New Testament writers. He had studied under the famous Rabbi Gamaliel and he knew Greek well (Acts 22:3 cf 5:34 and 21:37). Peter is frank, impetuous and even aggressive, while Paul is generally deliberate, intellectual and ordered.

In terms of background, both are unlikely leaders of the Church: one has misunderstood his Master on the crucial issue of his suffering and death as the way of salvation and is rebuked first for his lack of spiritual insight and then for his denial of his leader when it counted the most, at the time of his arrest and trial (Mk. 8:33, 14:66-72, Lk. 22:61, John 20:15-19). The other is a bitter opponent and leading persecutor of the nascent Christian community. He has been responsible for the imprisonment and death of many of the followers of the Way of Jesus (Acts 7:58- 8:3, 9:1-2, 22:4, 26:10). What unpromising material!

Except for those two little words ‘but God...’ Through the instrument of his brother Andrew (who has a habit of bringing people to Jesus), Simon son of Jonah is brought to Jesus who gives him his new name of Kepha (or the rock or Peter) and calls him to follow him (John 1:42, Matt. 4:18-20, Mk. 1:16-18, Lk. 5:10). When it comes to Peter’s great confession that Jesus is the Messiah, the Son of the Living God (Matt. 16:13-19), he is told explicitly that this is not because of his intrinsic worth or abilities or because of what other human beings may have taught him but because God has chosen him to make this truth known to the other disciples. He is always first among the Apostles, he is told that, after he has repented, he must strengthen the others (Lk. 22:32) and then, in that final encounter by the shores of the Sea of Galilee, he is told to shepherd the flock of Jesus. Simon’s weaknesses are there for all to see and he has to repent of his failure, but he is also a trophy of grace. Not only in the environs of Caesarea Philippi but again and again, for example, in the first part of the Acts of the Apostles or in the letters which carry his name, he is called to set out the faith of the Church as God has revealed it to him. It is the setting out of divine revelation which is important not the vacillation, cowardice or ignorance of the man. So it is with every authentic teacher of God’s Word. Their teaching has authority as long as it is in conformity with what God has revealed in Jesus and not otherwise.

Paul, similarly, in spite of his terrible record of fanaticism, is conscious of his destiny in God’s purposes. There is then that dramatic call in the encounter with Jesus on the road to Damascus. This had such an abiding effect on Paul and the early Church that it is recorded no less than three times in the Acts of the Apostles and also, by implication, in Galatians 1:11-17. This gives him the confidence that his mission is not one of human origin and nor is the content of the Gospel he proclaims, which, he claims, came by direct revelation of Jesus Christ, whether on the road to Damascus or elsewhere.
At the same time, both in Galatians and in Acts, he is concerned that there should be unity in the truth of Gospel (Acts 15:1-29, Gal2:1-10) and values agreement with the other apostles on contentious issues. In 1 Cor. 11 and 15, moreover, he is passing on the Tradition (paradosis) which he has received from the Church. In the first passage, it is the institution of the Eucharist: FF Bruce, the well-known New Testament scholar, points out that both the grammar and the context determine that ‘receiving from the Lord’ here does not mean direct revelation but the passing on of Tradition whose authenticity is ultimately guaranteed by the Lord through the work of the Holy Spirit in the Church. For us today, the authenticity of any fundamental tradition would be guaranteed by its agreement with Scripture and with the unvarying practice of the universal Church--both the work of the Spirit.

I Cor 15 is about the crucial doctrine of the Resurrection of Christ. Here again, Paul talks about receiving and delivering to the believers in Corinth the faith of the Church and goes on to enumerate the many witnesses to the Resurrection of which he is only one and, according to him, the last and the most unworthy.

It is fitting that these two towering figures should be remembered and thought about together. They were strong personalities with clear views of their own, but they did not allow these to obscure the Gospel or to imperil the unity of Christians in its truth. They allowed rather their strengths and weaknesses to be used by God for the sake of spreading the good news about Jesus from Jerusalem to Rome and beyond.

Almighty God, whose blessed Apostles Peter and Paul glorified you in their death as in their life: grant that your Church, inspired by their teaching and example, and made one by your Spirit, may ever stand firm upon the one foundation, Jesus Christ your Son our Lord, who is alive and reigns with you, in the unity of the Holy Spirit, one God now and forever. Amen.