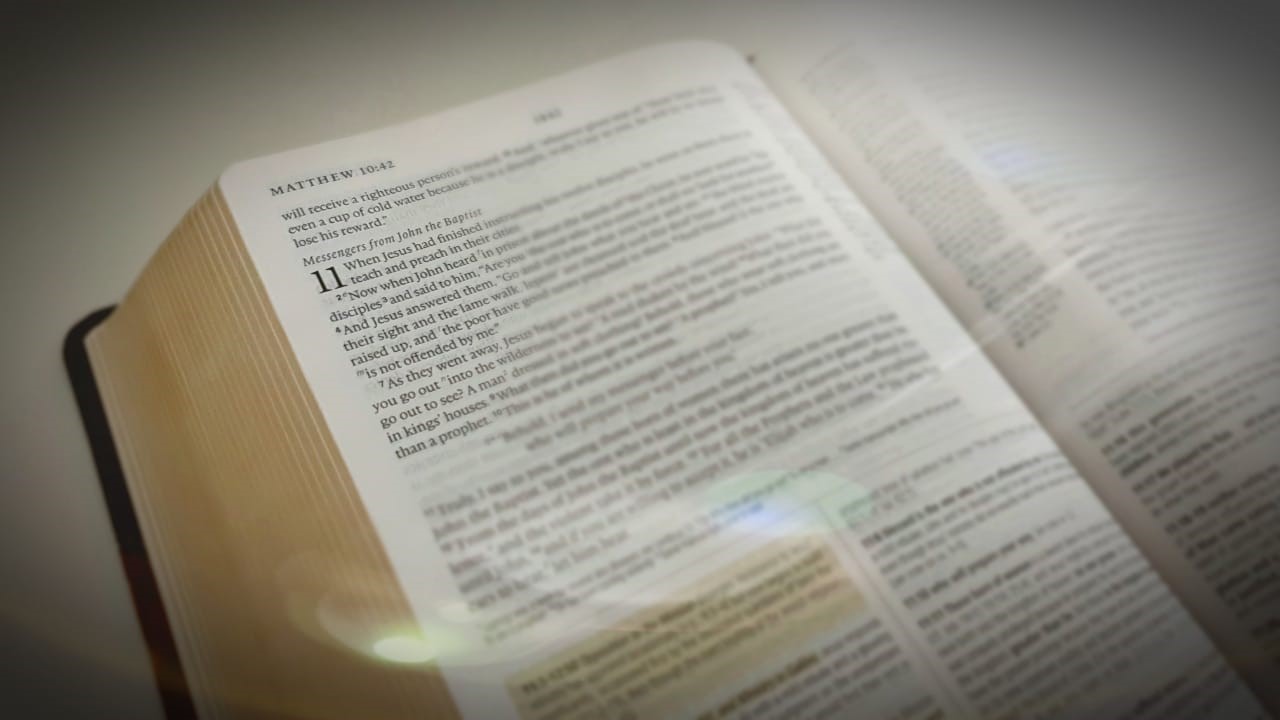 The reading is from Saint Matthew’s Gospel 11:25-30. Chapter 11 of Saint Matthew’s Gospel is one of the richest in the New Testament: Jesus, first of all, answers the doubts of John the Baptist and his disciples about whether he really is the expected Messiah by referring them to the fulfilment of prophecy in his work. The blind are receiving their sight, the lame are walking, lepers are healed, the deaf hear, the dead are raised and the poor hear good news for them. Interestingly, the prophecy to which he refers (Isa. 35:5-7) is about the coming of God. For Jesus, the Messiah is not just a human figure who liberates Israel from political servitude. He is the presence of God’s eternal Wisdom and Word.

In this chapter, he speaks of himself particularly as God’s Wisdom, with him from the very beginning and gathering the poor, the simple and the naïve to teach them God’s ways (Proverbs chapters 8 & 9). When he tells his hearers to take his yoke upon themselves and to learn from him because he is meek and humble of heart, he is echoing what is said about Wisdom, and those benefitting from her, in the deutero-canonical Wisdom of Jesus son of Sirach (51:13-30).To learn wisdom from Jesus the Messiah is to take on a yoke that is freeing and refreshing in contrast to the heavy load of legalistic religion his hearers were being asked to take by their leaders.

Here then is the humble teacher teaching humble folk the wisdom by which they can be freed and changed--and yet because of who he is, this is a wisdom greater than the wisdom even of Solomon (Matt. 12:42). This is divine Wisdom teaching us how to be truly wise! Fulfilling the law of Christ is neither burdensome nor wearying because it is an expression of how we ought to be, by nature and original purpose, persons in relationship with God our Creator and with those around us.

Swithin, Bishop of Winchester (died 862), is known for the saying, “If it rains on St Swithin’s day, it will rain for forty days hereafter!”. He should rather be known for his humility. He was a trusted adviser of the King of Wessex, at a time when this kingdom was coming to prominence. He had also tutored the King’s son and, no doubt, because of the royal connection, he was appointed Bishop of Winchester. The great King Alfred was growing up during his episcopate. He was to establish the foundations of what was to become England and to give it a Common Law which was not only a synthesis of the laws of the people he was uniting in his kingdom, but soundly based on the teachings of the Bible. Swithin could have adopted a proud and haughty air as a prelate of the Church and a courtier to such a distinguished royal household but he remained austere and humble and, at his own request, was buried humbly in an ordinary cemetery and not in the Cathedral of which he had been the bishop. In this, he was only emulating his master who had nowhere to lay his head (Matt. 8:20) and whose grave was among the offenders (Isa. 53:9).

Humility is a peculiarly Christian virtue. It does not figure among the classical virtues of prudence, temperance, fortitude and justice. It is not even found in the so-called theological virtues of faith, hope and charity. Its importance goes back to Jesus himself and his sacrificial humility: “For the Son of Man came not to be served but to serve” (Mark 10:45) and to Paul, writing about Jesus, when he says, “And being found in human form he humbled himself and became obedient unto death, even death on a cross (Phil. 2:8). We too then are to have, “the same mind which was also in Christ Jesus (Phil. 2:6). In Romans, he tells us not to be conceited but to associate with the lowly (12:16) and in Philippians again, he tells his readers that in humility they should count others better than themselves (2:3).The writer of the Letter to the Hebrews exhorts us to go outside the camp and bear the abuse which Jesus endured so that he may sanctify us through his own blood (Heb. 13:12-13).

We give thanks to God for all those saints who have displayed this evangelical virtue in imitation of their Lord and Master and especially now, Swithin, Bishop of Winchester. Praise be to The Father who sent his Son. Praise to the Son who emptied himself to be one of us and praise to the Holy Spirit who forms Christ in us!

Almighty God, by whose grace we celebrate again the feast of your servant Swithin: grant that, as he governed with gentleness the people committed to his care, so we, rejoicing in our Christian inheritance, may always seek to build up your Church in unity and love; through our Lord Jesus Christ who has given us a pattern of gentleness and humility. Amen.