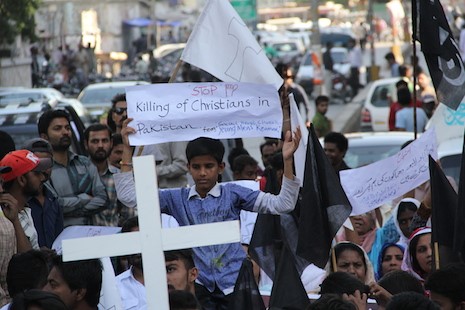 In a population of over 180 million, Pakistan’s Christians make up only about two percent. They’re disenfranchised, harassed, and persecuted. Many suffer from grinding poverty. Education and employment discrimination leave most only the lowliest occupations.

Some Pakistani Christians spend their lives in brickyards. Close to being slaves, they’re bonded laborers unable to work off the outrageous debt laid on them by Muslim landlords, working within perilous distance of blazing hot kilns. In at least one case, a young Christian couple and their unborn child were murdered, burned alive in the brick kiln.

Others find work as janitors or sewer workers. Sewer workers are forced to risk their lives on a regular basis by their Muslim employers who see this as a way to demonstrate the supremacy of Islam. They barely regard their Christian employees as human. Christian sanitation workers are the first ones sent into sewer trench lines, and usually without proper protection. Every year Christian workers die from exposure to toxic fumes.

Earlier this month was the ninth anniversary of the assassination of Pakistan’s Minister for Minorities, my friend Shahbaz Bhatti. He and Punjab Province Governor, Salman Taseer, a Muslim who fought against Pakistan’s egregious blasphemy laws and the impact they have had on Christians, were the greatest champions of persecuted Christians. Both of them were murdered for trying to bring religious freedom and an end to those outrageous blasphemy laws. Both had defended Asia Bibi, a Christian woman sentenced to death under the blasphemy law and imprisoned for

Bhatti, the only federal government minister who was a Christian, was brutally ambushed outside his mother’s house on March 2, 2011. He had practically prophesied his own death four months earlier when he recorded a video with the BBC, leaving instructions for it to be released if he were killed. In the video he declared, “I believe in Jesus Christ who has given His own life for us. I know what is the meaning of “Cross,” and I am following the Cross, and I am ready to die for a cause.”

Conditions have deteriorated even further in the past decade as the Taliban from Afghanistan moved into the country next door. More Christians have been falsely accused under the blasphemy laws, but, thank God, Asia Bibi was finally delivered after being imprisoned since 2009.

Next Monday’s devotions will focus on some recent very disturbing incidences of Christian persecution in Pakistan. In the meantime, please be in prayer for our persecuted Christian brothers and sisters in Pakistan.

Psalm 33 is one of the psalms in today’s Daily Office. Please pray for Pakistan’s Christians along the lines of verses 17-19: Behold, the eye of the Lord is upon those who fear him in Pakistan, and upon Pakistan’s Christians who put their trust in His mercy, to deliver their souls from death. Thank you, God, for feeding your suffering children in Pakistan in time of famine. We ask You to be their help and shield.

Watch the video referred to above, the video of Minister Shahbaz Bhatti’s declaration of his faith in Jesus in light of the dangers that would bring about his death. Thank God for courageous, faithful Christians like Bhatti. Write a short statement of your own as a declaration of your faith in light of whatever obstacles, fears, or hard situations that you face. Extra credit: video yourself speaking your statement, along with a link to Shahbaz Bhatti’s statement, and share on your social media.

Father God, we thank You for Your love and goodness. We thank You for our brothers and sisters in Pakistan and their faithfulness to You in spite of their suffering. We thank You that in spite of their poverty, they are rich in You. We ask You to intervene on their behalf, LORD, and bring Pakistan’s blasphemy laws to an end, and bring religious freedom to the nation. Help us, LORD, to remember these fellow Christians and compel us, by Your Holy Spirit, to do all that we can to help them. In Jesus’ Name. Amen.