Pray for Mary: A Woman for All Seasons 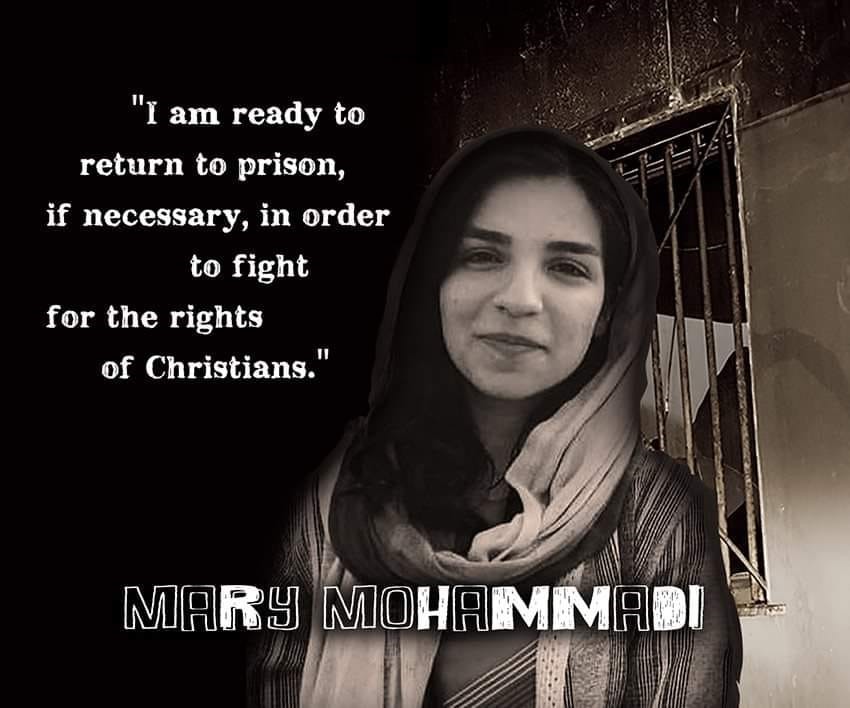 Long before the rest of the world began getting insomnia thinking about “Nuclear Iran,” Christians in that Islamic Republic lost more than just sleep. For decades, Iranian Christians have lost human rights, freedom, and their very lives.

In the late 1970’s and throughout the 1980’s, persecution was directed at the Anglican Church. In the 1990’s the Islamic regime targeted the broader church, murdering many top Christian leaders in an attempt to stop Christianity.

Persecution continues today, conflated with oppression of other freedom fighters such as women who defiantly remove their hijabs. Iranian Christians are persecuted, arrested, and killed. But the Iranian Church continues to grow, and reports surface of revival and conversion after conversion in Iran’s churches.

Today we focus on one of many Iranian Christian heroes, Mary Fatemeh Mohammadi, 21. Our sister Mary is a courageous follower of Jesus, a convert from Islam. She was arrested on January 12, 2020 for protesting the regime after the downing of the Ukrainian passenger jet. After no word of her welfare, it was finally confirmed she was held in Qarchak Detention Center, south of Tehran.

According to Christian human rights group Article 18, prior to this arrest, Mary had already served six months in prison because of her Christian faith and been kicked out of university on the eve of her English-language exams. Save the Persecuted Christians revealed this is actually her third arrest since her conversion to faith in Christ at age 18.

Mary is currently out on bail, but the Persian language HRANA news agency reported that during her incarceration she was beaten so badly that the bruises were visible for three weeks. She has also suffered other abuses. And Qarchak Prison, considered the worst women’s prison in the country, has been sanctioned by the US for “gross human rights violations.”

Save the Persecuted Christians released a statement for International Women’s Day this past Sunday, March 8, declaring that Mary Mohammadi should be honored as a “courageous woman of faith” and her story elevated. Yes! If anyone should be honored for an “International Women’s Day,” it is she. But Mary’s King and Lord esteems this faithful, courageous child of His every day. She is a woman for all seasons!

One of the psalms appointed for Daily Office today fits very well Mary Mohammadi – and all our persecuted brothers and sisters that stand firm as she has done. Psalm 26 requests, “Be my judge, O Lord, for I have walked innocently.” Pray for Mary, that the LORD, and not the Islamic court judge who is supposed to sentence her, will be her judge. The psalm continues, “my trust has been in the Lord, therefore I shall not fall.” Please pray this psalm with young woman in mind.

If you would like to follow up on prayer for Mary Mohammadi and other Iranian Christians presently in prison, you can apply to join the “Pray for Fatemeh Mary Mohammadi” on Facebook. It is a private group.

You can find out more about Iran’s decades of persecuting Christians in this article. And read the book by two more of the LORD’s amazing Iranian daughters, Maryam Rostampour and Marziyeh Amirizadeh: Captive in Iran.

Pray also for the wives and children of the martyred in Iran, who have shown incredible forgiveness and determination to follow in the footsteps of their beloved one.  Bishop Haik Hovsepian Mehr (you can find Hovsepian Ministries on YouTube); Pastor Hussein Soodmand; and Pastor Mehdi Dibaj, for starters!

Heavenly Father: We thank You that Mary Mohammadi, Your daughter and servant, is out of prison on bail. Please heal her of all the ill effects of Qarchak Prison, physical, mental, and emotional. Strengthen her, provide for her nutritional needs, and protect her from the corona virus. Spare her, O LORD from more imprisonment. Let her court case be only a way to glorify You. Deliver the other Christian prisoners in Iran, as well. Put their names on our hearts to remember them and to thank You for their faithfulness for You are worthy to be praised and worshipped and glorified. In Jesus’ name. Amen.