Partners for the Sake of the Persecuted 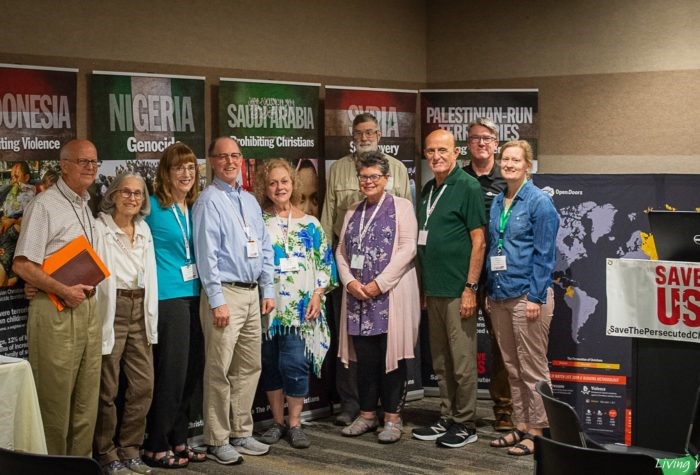 In the remaining days I have left to share my thoughts on advocacy for persecuted Christians with you, let’s explore some additional characteristics that make an effective advocate.

In September 2019, many from around the world attended the New Wineskins Missions Conference. The theme of the conference? Better Together! We focused on sharing, praying, winning the world for Jesus together. And just as our Anglican Global Mission Partners work better together, advocates for the persecuted Church work better together.

Last week I wrote about a new initiative from East African Christians to pray and fast, interceding against COVID-19, locust plagues, and widespread hunger. Their effort is great, but it’s even better when it’s an effort from Christians around the world. As Christians in northern Uganda, South Sudan, and elsewhere see people from places such as (insert your location here!) joining them, they feel strengthened and gladdened not to be alone.

In the same way, being an advocate for the Suffering Church shouldn’t be a lonely job. It should be something that we as the Body of Christ do together. And something in which we embrace all those who want to help our persecuted brothers and sisters.

As I mentioned in an earlier devotional entry, when American activists for the persecuted church first began trying to mobilize the grassroots in the mid 1990’s, it was Jewish activists from the Campaign to Free Soviet Jews that came to our aid. They told us their story and encouraged us to persevere. They helped us to model our campaign after theirs. And many from that movement continue to help us today, thanks be to God.

Additionally, the more recent Save the Persecuted Christians coalition (STPC) that began in February 2018 was also modeled after the Campaign to Save Soviet Jewry. This coalition, of which I was a founding member, launched activities by providing free banners to churches like the Save Soviet Jews banners that sprang up across America in the 1970’s. Churches can still get a banner today to raise awareness of persecuted Christians.

More recently, STPC created a display, People of the Cross -- twenty-four 7’ banners of countries where Christians are persecuted. The banners have been exhibited in churches, and even State Capitols around the USA. Several American Anglican churches and dioceses have displayed the banners, and more are clamoring to do so – after the COVID-19 crisis is over.

We owe a great debt to our Jewish brothers and sisters for their help with advocacy for the Suffering Church. In fact, it was a Jewish man, Michael Horowitz, who was largely responsible for a Congressional bill that became US law on International Religious Freedom.

Horowitz also recruited the late, great A. M. Rosenthal, former editor of the New York Times, into our campaign. He told Rosenthal there was an untold news story – how Christians around the world were like innocent lambs to the slaughter.

Rosenthal was deeply moved. He wrote story after story about persecuted Christians and other persecuted peoples. When the New York Times dumped its former editor in 1999 – “coincidentally,” after he began writing these columns – he moved to other venues and kept writing. In 2002 President George W. Bush gave him the Presidential Medal of Freedom for “outspoken defense of persecuted Christians.” I encourage you to find and read his columns! (I have photocopies of every story in my office files, if you need them!) We may never know until we enter Eternity how those columns were used to change hearts.

God used Jewish people who cared about persecuted Christians to convict the hearts (you could say shame!) of Christians.

We also have many opportunities as Christians for partnership in advocacy for persecuted Christians now. I mentioned Save the Persecuted Christians earlier. We also have our own Suffering Church Network in GAFCON. The Rt. Reverend Andudu Adam Elnail, the Bishop of Kadugli and Nuba Mountains in Sudan and I welcome you to be our partners in working for the Suffering Church. In addition, the New Wineskins Missionary Network launched the Anglican Persecuted Church Network at the conference in September. Patricia Streeter and I urge all of you to consider joining our Facebook page to partner with us.

We benefit from being partners together for the Suffering Church because we are encouraged by each other, God desires unity, and our prayers and our witness are strengthened. But I believe that God also calls us to partnership, unity because He has given us all such different gifts and talents. I am particularly grateful for my sisters and brothers in the GAFCON Secretariat, such as the Communications Team, who have given me the opportunity to do these devotions, and who do so much for GAFCON.
We miss out on valuable assets to our work of advocacy for persecuted brothers and sisters if we are not working together. Tomorrow we will look at some of those assets with which God has gifted people.

Prayer:
Father God, thank You that You created us to be together with You and with each other. Thank You that we can learn from each other and become more like Jesus in our partnership with one another. Thank You for the team at GAFCON who ensure that these devotions are communicated. Please bless them as they work for You. How kind and gracious it is for You to allow us to be the hands and feet of Jesus. Help us to together be Jesus’ hands and feet for the Suffering Church. In Jesus’ Name. Amen.