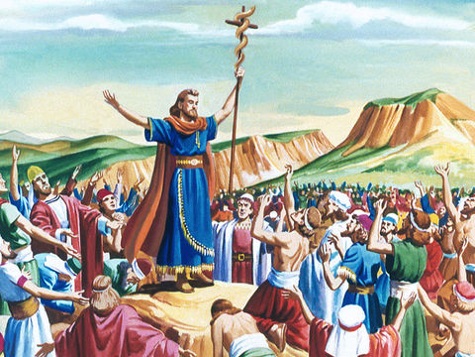 Yesterday we explored how Moses spoke as an advocate for the Hebrew people to God by reminding Him of His past deliverance of them. Another characteristic of effective advocacy from Moses was how he understood the importance of God’s past promises to the Israelites and His irrevocable covenant with them. Moses pointed out to God that for the sake of His honor on the earth He should relent of His deadly intentions toward the wayward, golden calf-worshipping Hebrew people.

Moses reasoned with God that if He were to kill the Israelites at that point, after leading them out of Egypt and into the wilderness, it would really make Him look bad. The Egyptians would be able to say “Ah hah! So that’s the kind of God the Hebrew people have!”

Of course we know that God’s wisdom, love, and mercy are far beyond what humans can comprehend – even Moses – but the Lord did listen to his plea on behalf of the Israelites.

•    Advocates are POLITICALLY SAVVY in dealing with the powerful!

Similarly, those who act as advocates for persecuted Christians around the world can exploit the desire to look good, or to be benevolent, of those who have the power to change situations for the persecuted. One caution: many of these ruthless leaders may do what we hope in a particular situation to make themselves look good (and receive the benefits that go along with that) but they are still dangerous. Jesus tells us to be innocent as doves, but He also tells us to be wise as serpents!

It doesn’t always work. Some of the powerful and ruthless leaders of the world who persecute Christians have no desire to look good – at least not in the way in which our moral compass says is good. In that case, advocates can find another incentive. In the Free Soviet Jews campaign that I mentioned yesterday, as well as in some nations’ foreign policies today, there are economic incentives.

One of the repercussions from the grassroots mobilization of the Free Soviet Jews campaign was a 1974 U.S. law called “The Jackson-Vanik Amendment.” This amendment tied access to the Most Favored Nation (MFN) trade status to countries’ human rights and willingness to allow emigration of Soviet Jews and other dissidents.

This might seem like odd and unspiritual devotions today. But think about Moses again. When God commissioned him to go speak to Pharaoh as an advocate for the Israelites, He asked Moses what he had in his hand. As you know, Moses’ rod became the conduit of God’s power and His miracles on behalf of the Hebrew people. If we will let Him, God can use whatever we have in our hand for His glory and for rescuing His persecuted children. Even politics sometimes!

Exodus 10. As you read how the Lord hardened Pharaoh’s heart, pray that He will do whatever is necessary to the hearts of world leaders who are persecuting Christians today. You may also be blessed listening to this powerful musical composition about the Exodus, “The Glory of Jehovah” composed by Dr. Dorothy Gates of The Salvation Army New York Staff Band. You can find all five movements of the work on YouTube, beginning with Part 1: Oppression.

The Exodus was not just about Moses being an advocate for the Hebrew people to Pharaoh, it was about God using Moses to bring them out – out of Egypt, out of slavery, out of misery, to become a great nation. Look for a project you can help fund for one persecuted Christian or one church that is being persecuted.

Dear Father God, if You ask us, “what do you have in your hand?” we have to answer: PLENTY. You have provided for us. You are Yahweh-Yireh. We thank You and praise You for all You have given to us. All that we have is from You. Help us to discover what we have in our hand, as Moses did, to help free our brothers and sisters who are suffering for Your sake. In the Name of Jesus, our Deliverer, we pray. Amen.