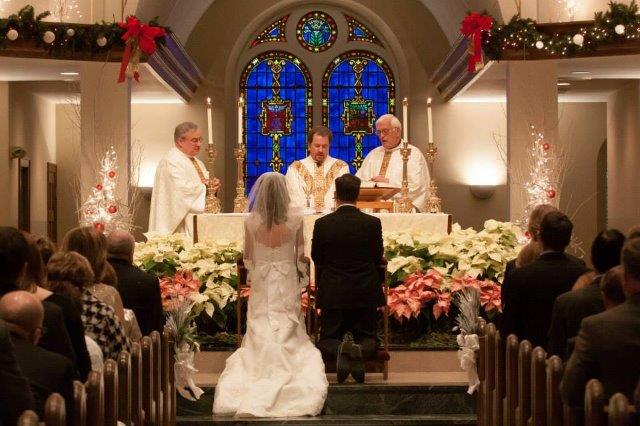 …Our Lord Jesus Christ adorned this manner of life by his presence and first miracle at a wedding in Cana of Galilee, and it is commended by Holy Scripture to be held in honor among all people.

Having begun at the beginning of the Old Testament, the Prayer Book now moves to the New Testament Gospel of John, which recounts a new beginning: Jesus’ first miracle or “sign,” turning six large jars of water into wine. But what was this is a sign of?

“On the third day there was a wedding at Cana in Galilee, and the mother of Jesus was there. Jesus also was invited to the wedding with his disciples” (John 2:1-2). According to the Prayer Book, Jesus adorned – a lovely word, isn’t it? – “adorned this manner of life,” that is, holy matrimony. In one way Jesus attending this event is hardly strange: in most cultures, weddings are preeminent social events. People take off the day or even a week to celebrate, and they do so with exuberance, and yes, with abundant wine.

Jesus Himself was a single man, long past the normal age of marriage, an obligation in Jewish culture. Further, although some of his disciples were married, he called them away from their normal manner of life to become travelling evangelists, begging hospitality as they went. He laid out their priorities when he said to them: “Who are my mother and my brothers? You are my mother and my brothers!” (Mark 3:33-34). Some religions like Buddhism give highest rank to the monk, and the Christian Church has always honoured those who have lived dedicated celibate lives for Jesus.

But here in his first miracle Jesus identifies Himself with the “worldly” celebration of a wedding, and specifically the need of wine. In so doing he transforms not only the water but the meaning of marriage itself. The wine is a sign not only of human joy but of His blood poured out for us, as is signified in the Holy Communion. The poet George Herbert put it this way: “Love is that liquor sweet and most divine, which my God feels as blood but I as wine.” The Prayer Book makes the connection of marriage and the Eucharist by instructing the couple to participate in the Holy Communion as soon as possible – even at the wedding itself.

A wedding is a common event, adorned by Jesus’ presence and “commended by Holy Scripture to be held in honor among all people” (Heb 13:4). Holy matrimony is a form of discipleship, taking up the Cross, just as serious and sacrificial as choosing to remain single for life.

Grant us courage, O Triune God, to hold fast to the truth of your Word, and give grace to those who are counted worthy to suffer for the Name of Christ. Now to him who is able to keep you from stumbling and to present you blameless before the presence of his glory with great joy, to the only God, our Savior, through Jesus Christ our Lord, be glory, majesty, dominion, and authority, before all time and now and forever. Amen” (Jude 24-25).
Concluding Collect from “A Litany for Marriage” (ACNA)