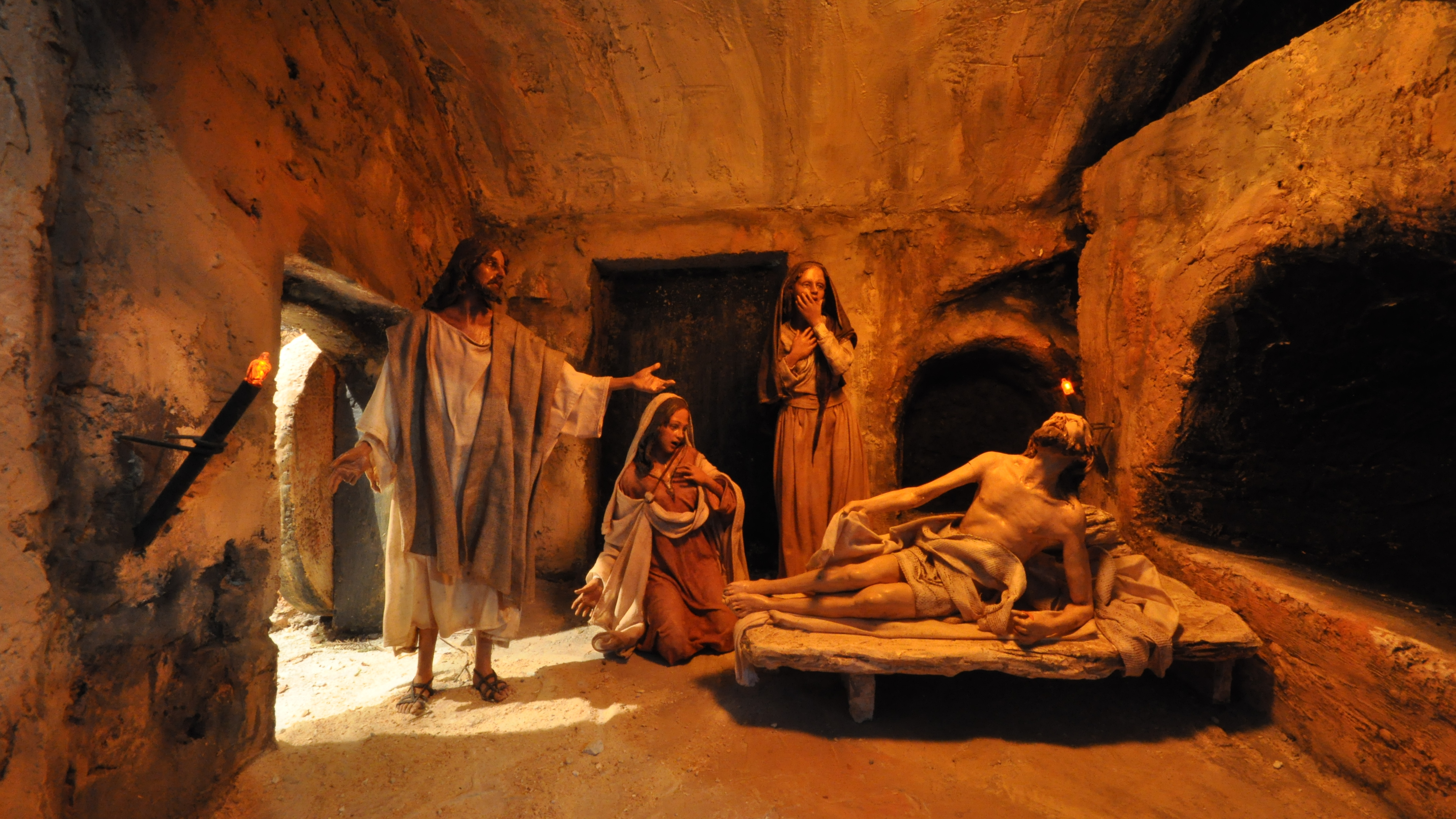 The reading is from Saint John´s Gospel 11:1-45. They are an ordinary family living in a village just outside Jerusalem. Lazarus (or Eliezer ‘God is my help’) is only mentioned here and nothing much else is known about him. We know a little more about the sisters: Martha (the name in Aramaic could simply mean housewife) lives up to her name and is found serving Jesus both when he visits them at home (Lk. 10:38-42) and in the house of Simon the Leper in Bethany (Mark 14:3; John 12:2).

Mary is the extravagant one: she spends all her time listening to Jesus, when he visits them, instead of helping her sister entertain Jesus’ considerable entourage. In John’s Gospel, she is identified as the woman who anoints Jesus (Mk. 14:3-9 and parallels, John 12:3-8). On both occasions, Jesus upholds her extravagant devotion.

And yet they are also an extraordinary family because Jesus’ most dramatic sign is performed in their midst: that is, the raising of Lazarus from the dead. The narrative is full of drama: Jesus and his immediate followers have withdrawn across the Jordan because of the threats of his enemies. While he is there, the sisters send him a message that their brother is seriously ill. Instead of rushing to Lazarus’ bedside, Jesus lingers on till he learns of Lazarus’ death. He then prepares to return from Bethany in Peraea to Bethany in Judaea where the family lived. His disciples are apprehensive but follow loyally. He is met there by Lazarus’ sisters and goes with them to the tomb, along with the other mourners. Here he is deeply moved and disturbed in his inner self and the shortest verse in the Bible tells us that he weeps (v.35). He prays to his Father and, over the protests of Martha, asks the stone to be moved. He then orders the dead man to come forth which he does. Jesus tells the watching company to unbind his burial bandages and to let him go.

The other Gospels all record Jesus raising the dead (Mk. 5:21-43 and parallels, Lk. 7:11-17) but this is certainly the most impressive example of these miracles and where Jesus’ own emotions are involved the most. In spite of the differences, however, the raising of Lazarus is similar to the others in that he is revived to carry on with his earthly life. Although the power of Jesus to raise the dead prefigures the raising of the dead at the Last Day, these raisings are quite unlike his own Resurrection which the Letter to the Hebrews calls “the power of an indestructible life” (7:16). It is then the Resurrection of Christ himself and not his raising of Lazarus and the others which is the basis of Christian hope. We are called to share in his sufferings so we may come also to share in his risen life which is indestructible (Phil 3:10, 11; I Cor 15:42-50).

Today also, people continue to meet with Jesus and to be transformed by him: his sworn enemies become his friends, drunkards and drug addicts become stone cold sober, model parents and sometimes leaders in churches, the despised attain wisdom which is sought after by many and the list could go on.

How have you met with Jesus? What effect has he had on your life and what claim does he have on it? How would life have been different if you had not met with him?

God our Father, whose Son enjoyed the love of his friends, Mary, Martha and Lazarus, in teaching, learning and hospitality: may we so rejoice in your love that the world may come to know the depths of your wisdom, the wonder of your compassion, and your power to bring life out of death; through the merits and mediation of Jesus Christ our friend and brother, who is alive and reigns with you and the Holy Spirit, one God now and forever. Amen.