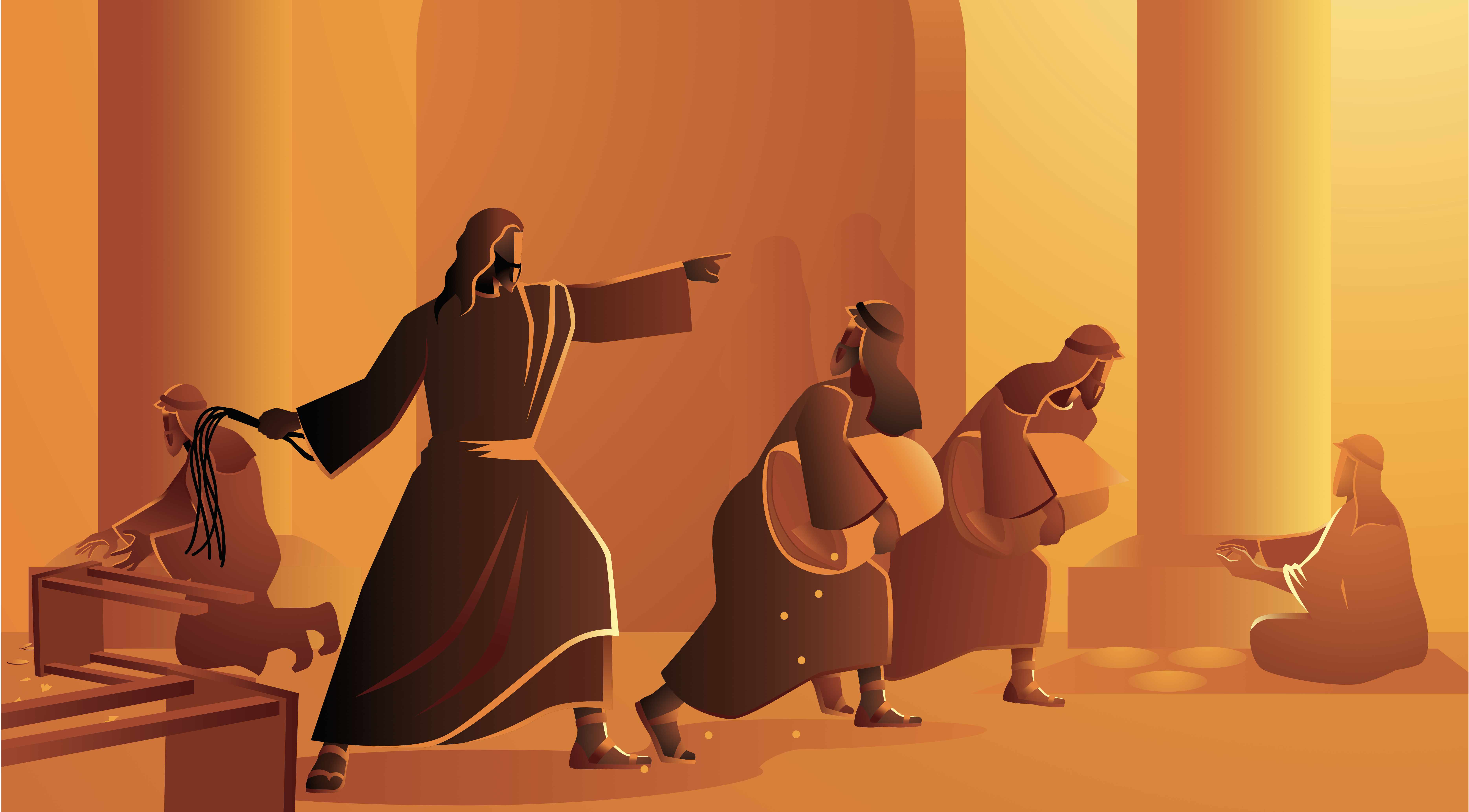 In John 2:13 we find Jesus in the temple at Jerusalem at the time of the Jewish Passover. He looks around and sees cattle, sheep, and doves. He hears the noise of these animals and the clink of coins instead of prayers and conversation about God. While these traders could be seen as performing a worthwhile service in terms of provision of sacrificial animals and coinage to pay the temple tax, it is where they are doing it that is the issue. This is happening in the temple courts.

Jesus’ drives the livestock out, upturns the money changers’ tables and orders the birds to be removed. It is a tumultuous scene. Jesus’ words in verse 16, to the dove sellers encapsulate his objection when he says in verse 16:  Get these out of here! Stop turning my Father’s house into a market!

It is at this point that John interrupts the story with a memory from his disciples.  They recall the Scripture from Psalm 69:9 where the psalmist says that zeal for the house of the Lord will consume him. In the context of John’s Gospel this has a double meaning. On the surface it is referring to the passion that Jesus exhibits in this current action but in the longer-term prospect of the Gospel Jesus will be ‘consumed’ in death by his zeal for God and his glory.

This is a challenging thought: how are we consumed with zeal for God’s glory? Do we really care?In verse 18 we see the concern of the Jewish leaders. They realise that this is a significant action, maybe even a prophetic one. And so they ask for a sign from Jesus to justify himself. In response, Jesus challenges then to destroy the temple and he promises that he will raise it in three days.

The leaders’ response indicates they have misunderstood Jesus. They hear his words as a reference to the temple they were standing in. Now this would be impressive, to rebuild in three days a building that had taken 46 years to build.

John tells us that Jesus intended something else: that he was referring to his own body. We can perhaps imagine Jesus pointing at himself as he says ‘Destroy this temple’. The actual sign Jesus promised was his resurrection from the dead. The disciples only realised all of this after Jesus was raised from the dead. This is the point when so many things came together for them about Jesus and his mission.

There is a lot going on here. Jesus points to the abuse of temple worship that was taking place. In the other Gospels Jesus is recorded doing this again in the temple later in his ministry and making the point even more strongly that things weren’t right. He says in Matthew 21:13, ‘My house will be called a house of prayer,’ but you are making it ‘a den of robbers.’ Things need to change. Jesus’ action is like a judgement.

Jesus refers to his own body as the temple. The suggestion that will be developed through the rest of John is that Jesus will replace the physical temple. Jesus is the true temple of God.

When we read this incident side by side with the story of the wedding at Cana we get an insight into Jesus’ ministry, his work. He will provide abundant life, and he will do that through his death and resurrection. The temple of his body will be destroyed, and then raised on the third day. As a result, Jesus is the new temple where anyone and everyone can do business with God and find life.

Dear Father, We thank you that Jesus is the true temple, and that we can worship you through him in Spirit and in truth. We see Jesus’ zeal for you, and we say, thank you, for that zeal that took him to the cross. Please forgive us for our lack of zeal for you and your will.  Cleanse our hearts and our church from being numb to our Lord. We pray this in Jesus’ powerful name, Amen.

The Gafcon Ireland Council meet today (Oct 20). Pray for good fellowship and for the Holy Spirit to guide them as they take counsel together. In December they have a residential conference on 'Reaching and Equipping a New Generation for Christ'. Pray for good numbers and for the planning and organisation to go smoothly.