Holy Week with the Nuba 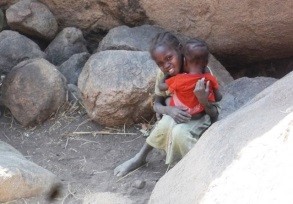 This is my last week to share messages about the Suffering Church with you for your Lenten Devotions. I will focus on the region where the Rt. Reverend Andudu Adam Elnail, the co-leader of our GAFCON Suffering Church Network is bishop: the Nuba Mountains of Sudan.

Africa foreign policy wonks refer to Nuba Mountains as “South Kordofan,” the ethnically-cleansed name given by Sudan’s Islamist regime. Frequently they just call it one of the “three areas.” But Kadugli and Nuba Mountains, where Elnail is bishop, is a culturally-rich area of dozens of tribes and languages. Christians and Muslims have lived there together in peace and friendship, sharing each other’s celebrations and lives. All of that was disrupted, devastated, by not one, but two genocidal wars against the Nuba by the National Islamic Front regime in Khartoum. Our Christian brothers and sisters were particular targets of this jihad.

With the regime change in 2019 there have been changes for the good. This is particularly true in the area under the governance of the Sudan People’s Liberation Army –North (SPLA-N), the heroes that defend the people of Nuba Mountains. The SPLA-N deserves far more credit for change in Sudan than protestors who complained when they couldn’t get petrol and flour.

But still much needs to happen to give the Nuba and Sudan’s other “marginalized” peoples (definition: indigenous, black, African ethnicities comprising about 80% of the whole country!) religious freedom and equality. Today, let’s look at back at the suffering that the Nuba people have endured at the hands of a regime that has tried to force Islamization upon them. Here’s what happened during the first genocidal war, in Kauda.

Kauda is a Nuba town roughly 50 miles northeast of the state capital, Kadugli. Its rich hills and fertile valleys suffer scars from bombs dropped from the sky to terrorize and kill men, women, and children. It still bears the scars of a wound it received at 9:00 AM, February 8, 2000.
In his beautiful but painful book, War and Faith in Sudan, journalist Gabriel Meyer recounts the events of that horrific morning, with photography by James Nicholls, who accompanied him to Sudan.

As children at Holy Cross Primary School settled into their studies in “classrooms” under two large shade trees, the Sudanese government turned its war on Christians once again and bombed the school. Twenty students and one teacher died. Dozens were severely injured, many requiring amputation. The Sudanese air force dropped five “barrel” bombs, studded with nails, on what the low-flying aircraft obviously knew was a civilian target. Meyer writes:

The first two bombs failed to hit their target, landing in a hollow a quarter mile from the school and at its perimeter. The third bomb, however, landed in the schoolyard between the two trees, leaving a blackened crater in its wake. Shrapnel moving at speeds of up to two hundred miles an hour sliced through the air.

The students who flattened themselves on the ground, as they had been trained to do, had a chance. Those who tried to run away from the blasts did not.

Seeing where the third bomb had struck, and with terrorized children breaking into a run all around her, teacher Roda Ismail tried to force them to lie down, and shifted her students to the back side of the southern tree to shield them from the shrapnel whining across the yard.

That was when the fourth bomb fell. This one exploded not in a line with the other bomb but behind the sycamore, ten feet from the shadow side of the southern tree where Ismail shielded her students. Their position left them exposed to the full force of the impact.

That was just one of countless bombings, killings, efforts by Khartoum to exterminate the Nuba. In those years of war, as well, Christians were not just displaced, killed, starved, and enslaved. Some were literally crucified by the soldiers of the Khartoum regime. Hundreds of thousands also fled south, to South Sudan, and are still there in Yida Refugee Camp.

What do we say? Did God forget about His people in the Nuba Mountains and throughout Sudan? Did He not care about their suffering? We know that is not true, we know that they are loved by God and that He was – and is – with them in their suffering, and that one day He will wipe away every tear from the eyes of the people who have suffered so greatly. But I cannot give a glib answer. I cannot give any answer. I can only know what the believers in Jesus in the Nuba Mountains themselves have said.

Some years ago (during the second genocidal jihad against Nuba by Khartoum) I wrote an article about the Nuba, in which I told of their worship music experienced by American advocate and worship leader, Slater Armstrong. Armstrong, the founder of Joining Our Voices,  filmed the Kurche Anglican Church Youth Choir singing such songs as, “Many signs have come to prove Jesus is true. We have seen those signs among us like hunger, starvation, and war.”

Leaders like Bishop Elnail and his priests, and other Christians see God moving now in the Nuba Mountains in a new time of relative peace and freedom. But what’s more, they, as well as Christians in what was then southern Sudan, now South Sudan, saw God moving in the time of war, death, and suffering, as well. South Sudanese composer of hundreds of hymns, Mary Alueel, wrote in one of her most famous:

Let us give thanks;/Let us give thanks to the Lord/in the day of devastation/and in the day of contentment/ Jesus has bound the world round/with the pure light of the word of his father./When we beseech the Lord/and unite our hearts and have hope/then the jok [devil] has no power./Nhialic [God] has not forgotten us./Evil is departing and holiness is advancing,/these are the things that shake the earth./Chorus: Do not look back; we are the people/who have received the life of Christ./Let us show forth the light/of the Son of Nhialic./Do what you are able to do/according to the gift/which has been given you.

Read the Daily Office Psalm 89 appointed for today. Think of how brothers and sisters in the Nuba Mountains see that Psalm as much more literal than we do!

Today’s Gospel reading for Morning Prayer, Mark 5: 21-43, demonstrates a God worth having faith in! A God who both heals and raises from the dead!

Explore the music videos from the Nuba Mountains on the Joining Our Voices website.

To understand the war in Nuba Mountains more clearly, read my article, “War of Domination,” and extremely sobering information by expert Dr. Millard Burr in report through 1998, and realize how many more people have died of war-related causes since that time. Quantifying Genocide in Southern Sudan and the Nuba Mountains 1983-1998.

Prayer:
O Lord, our hope is in You and You alone. We thank You Lord that You never forget us or abandon us. You never forgot or abandoned Your suffering children in the Nuba Mountains. Thank You for sustaining the Nuba through such days of devastation and terror. Most of all, thank You for sustaining their faith in You, their love for You, and the way that have shared the message of Jesus resulting more and more people coming into Your Kingdom of love and light. Be with them this Holy Week and pour out Your Resurrection Power on them. In Jesus’ Name. Amen.