Faithful unto Death: The Testimony of Iranian Martyrs 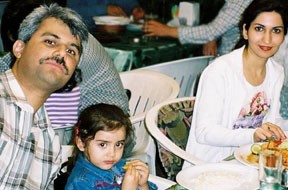 Yesterday I shared the story of Iranian Christian martyr Bishop Haik Hovsepian Mehr. I also mentioned the friend for whom he, a persecuted Christian himself, became an advocate: Mehdi Dibaj. Today I want to tell you more about Pastor Dibaj himself and his legacy.

Those of us in the West, who worship in freedom, can hardly imagine what it is like to have one after another of your church leaders disappear and be murdered. But this is what happened in Iran. Christians in Nigeria, Pakistan, India, China, and elsewhere can relate to what the Church in Iran went through and still experiences.

When Bishop Haik spoke up for Dibaj, the pastor had already been under death sentence for apostasy in prison for over nine years. As I revealed yesterday, Haik’s public intercession and advocacy for Dibaj resulted in both Dibaj’s release from imminent execution and Haik’s murder.

Dibaj was with his family that had waited for him for so long. Then on June 24, he disappeared on his way home from a Christian retreat in Karaj, a little northwest of Tehran. He was expected in time for his daughter Fereshteh’s sixteenth birthday party, but never showed up.

Iranian Christians were still reeling from Dibaj’s disappearance when another church leader, the Reverend Tateos Michaelian, was abducted on June 29.  Michaelian, senior pastor of St. John Armenian Evangelical Church (Presbyterian Church of Iran), had taken over as president of the Council of Evangelical Ministers when Haik was murdered. He was a scholar of philosophy and Persian literature who had translated some 60 books into Persian.

On July 2, authorities called his son to say they had found Rev. Michaelian’s body in a freezer in a home in Tehran. The cause of death was said to be multiple gunshots to the head. Three days later, police informed Mehdi Dibaj’s family that they had, (quite coincidentally, I’m sure!) found his body buried in a park in Tehran while they were looking for the “killers” of Michaelian. He had been stabbed in the heart, but also had rope burns on his neck. Hovsepian, Dibaj, Michaelian. Those were just three of a number of Iranian church leaders killed by the secret police in the Islamic Republic’s crackdown to suppress Christianity.

In spite of the Islamic regime’s efforts, however, the Iranian church continued (and continues!) to grow. Generations of faithful followers of Christ have emerged through decades of persecution. Fereshteh Dibaj is among these faithful ones—a second-generation Iranian Christian suffering persecution for the sake of Jesus.

Did you get that name? The daughter of martyr Mehdi Dibaj became a house church leader herself. Who could have blamed her if she had rejected such a dangerous calling? Or even if she rejected God, for seemingly allowing such evil and injustice against her beloved father? But Fereshteh rejected neither. Instead she embraced the God who loves her and gave His Son for her, and she embraced her calling to share Jesus love with the Iranian (Persian) people.

Fereshteh and her husband Amir “Reza” Montazami, a convert from Islam, were leaders of an independent house church in Mashhad, northern Iran. According to Compass Direct News Service, it was “the only known remnant of two active Protestant Christian congregations worshipping in the city before Iran’s Islamic revolution in 1976.” The churches were closed by the government in the 1980’s and their pastor, Hussein Soodmand, was executed in 1990.

Here’s something you should also know: The arrest of the Montazamis came less than a week after Iranian President Mahmoud Ahmadinejad visited the United States where he spoke to the United Nations and met with American mainline church leaders who, in large part, gushed over their meeting with the dictator and the opportunity to discuss their “no nukes” agenda. None of those church leaders felt compelled to speak out about the injustice being done to this young Christian couple. They definitely failed the “advocates testify to the innocence of the persecuted” test.

Finally, when Amir and Fereshteh were taken away for interrogation, they had to leave behind their little girl, Christine, in the care of Amir’s parents. Christine was six years old, the same age that Fereshteh was when her father was taken away. Can you imagine the fears that raced through her mind, wondering if she would, like her father, not see her child for ten years?

After an agony of silence, Christians in Iran and throughout the world rejoiced to hear that they were alive. The Montazamis were released on October 5, 2006 after Montazami’s elderly parents posted bail by turning over the title of a $25,000 property.

Praying for Fereshteh and Amir while they were detained, we had the photo that is included with this devotional. As soon as I saw that photo I realized without seeing the text that Fereshteh was her father’s daughter. Like Mehdi Dibaj she has beautiful, kind, dark eyes. And like him, she has a testimony of faithfulness under persecution.

The testimony of such brave leaders is essential in the continued growth of the Iranian church. More and more Muslims, disillusioned with Islam, have been coming to Christ, reporting dreams and visions of Jesus. But what are also necessary are the testimony, prayers, and active intercession of faithful advocates. Pray that now a third generation of descendants of those Iranian martyrs will prove as faithful as their parents and grandparents. And that we will be faithful to them.

Do not fear what you are about to suffer. Behold, the devil is about to throw some of you into prison, that you may be tested, and for ten days you will have tribulation. Be faithful unto death, and I will give you the crown of life. Revelation 2: 10

I’ve shared about some of the Iranian church leaders, and in the past about Mary Mohammadi, who threatened with years in prison now, but there are still more stories of the faithful. You can read more about Pastor Hussein Soodmand, who I mentioned above. Soodmand converted to Christianity before the 1979 Islamic Revolution. According to Article 18, he was active in the Christian organization the Bible Society, and oversaw the Episcopal church of Isfahan and later the Assemblies of God church in Mashhad.

Shortly before his execution, after months of torture, Soodmand wrote to his friends who had fled Iran: By following the example of the great shepherd of the flock, the Lord Jesus Christ, I am willing to sacrifice my life for my sheep. My escape from these dangers would weaken the flock of God and discourage them. I don’t want to be a bad example to them, so I am ready to go to jail again and, if necessary, even to give my life for them.

There is also a powerful article about Hovsepian Mehr, Dibaj, and Michaelian by Harold Fickett in Crisis Magazine here.

Prayer:
Heavenly Father: Thank You for Your care and watchfulness over Your church in Iran. Thank You for putting a hunger that can only be satisfied by Jesus in the hearts of Iranian Muslims. Please be with the families of those who are martyred and imprisoned. Bring total healing to their wounded spirits and give them strength as they follow in the footsteps of their fathers and mothers. In Jesus’ Name. Amen.