Esther: A Sense of Urgency and Divine Vindication 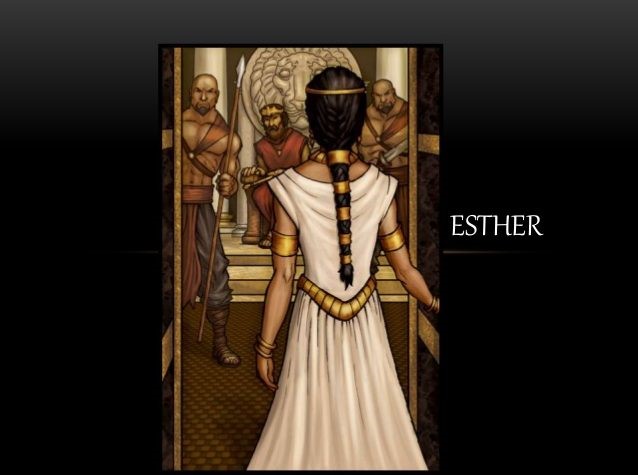 Today is Purim. A good day to make our Lenten Devotions about Esther, to honor her faithfulness and to soberly commemorate this one of many, many attempts by Satan to destroy God’s chosen people the Jews. Please pray with me today that the joy, peace, relief, freedom, lightness of spirit, healing, and certainty of being accepted by the Father that comes with knowing Jesus as the Messiah, Yeshua Hamaschia, would come to our Jewish brothers and sisters throughout the world, and particularly in Israel.

Esther was not pleading her case before God in the way that we have seen in the examples of Abraham and Moses. Theirs was a daunting and fearful task, but not in the same way as pleading before an earthly king, of a different faith, who could have you executed at any moment for coming before him without being summoned.

You know the story. Haman had convinced King Ahasuerus (aka Xerxes) to order the annihilation of every Jew in the kingdom. When Mordecai tells Esther what is to happen, he declares that God has put her in the position she is in “for such a time as this.”

They know that they are God’s instruments and behave accordingly. Esther tells Mordecai to fast, and that she and her attendants will also fast. She has to do business with God (who, interestingly enough is never named in the Book of Esther) before she faces the king.

Christian advocacy, likewise, should be grounded in prayer, infused with prayer, and covered by prayer. Heightened from prayer and fasting, awareness of being an instrument of the Lord on behalf of the persecuted will ensure that an advocate is open to whatever God has in store. Sometimes it comes as a “coincidence” that changes the situation. Other times God uses a “chance” encounter to enable a connection with just the right person. Awareness of being God’s instrument also gives us the faith that God is still in control even when it doesn’t seem as if He is answering prayer. In addition,

Esther approached the king to make her plea without being summoned because the situation was so urgent. This was a capital offense, unless the king extended his scepter to her. Christian advocates for persecuted Christians today rarely have to take their lives in their hands in that way. But a sense of urgency for the persecuted – knowing that they are dying, that they are being arrested or tortured or enslaved, will mean that we should make advocacy a priority. We will have less time for other things.

The Book of Esther describes the whole fascinating strategy to save the Jews.

The plan that Esther devises to counter Haman’s murderous intentions shows great political intelligence and understanding of human nature. And even though the situation was urgent, Esther set it up over a series of days for just the right effect. She invites the King and the evil Haman to two banquets that she has prepared. And she waits for the second banquet to appeal to her husband’s love with the unthinkable revelation that she and her people have been sold to be

“destroyed, to be killed, and to be annihilated.”

In the same way, advocates for persecuted Christians must be strategic. We must not just be as innocent as doves, but as wise as serpents, as Jesus said. Or be like the tribe of Issachar, whose men were Torah scholars

It seems as if God added His own touch to Esther’s plans using Haman’s own arrogance and hatred of Mordecai to hoist him on his own petard, or launch Divine vindication. King Ahasuerus asks Haman,

“What shall be done for the man whom the king delights to honor?”

And, naturally, Haman thinks he’s the guy the king delights to honor. Then, when the honors – a royal robe, the king’s horse, and a parade – are given to Mordecai and not him, it increases Haman’s hate, if that’s possible.
Perhaps this is also a motive for those who hate followers of Jesus? They sense in their spirit that the favor of God rests upon these people for whom they have nothing but contempt.

Read the Book of Esther to see more of the wisdom, strategic intelligence, and courage that God gave to Esther in order to prepare her “for such a time as this.”

Dear Father, God of Abraham, Isaac, and Jacob, thank You for protecting the children of Israel through the advocacy and wisdom of Esther. Please increase the spirit of Esther in your Church today so that we who worship in freedom will speak out for our persecuted brothers and sisters and be willing to say, “If I perish, I perish.” Just as You had plans for the Hebrew people and thus, forbad their annihilation, we know that You have plans for Your Body all around the world. We ask that You would deliver them from persecution and death in Jesus’ name. Amen.