Discovering Our Role as Advocates from the Hebrew Scriptures: Abraham and the Audacity of Advocacy 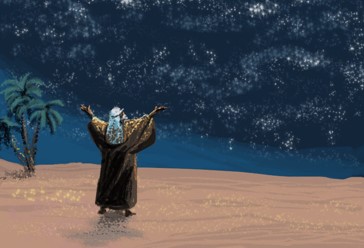 Advocacy for persecuted brothers and sisters around the world is a spiritual calling. To demonstrate the spiritual dimensions of advocacy, and to give us some ideas on how best to fulfil our role as advocates, we must look to the Bible.

A prime example to learn from is Abraham, an audacious advocate. In Genesis 18: 16-33, Abraham pleads, or to be frank, barters with God! God reveals to Abraham in this passage that he intends to destroy the city of Sodom because “their sin is exceedingly grave.”

First, Abraham pleads with God not to destroy Sodom for the sake of 50 righteous people. Talk about audacity! Abraham “comes near” and challenges the God of the Universe, saying “Far be it from You to do such a thing, to slay the righteous with the wicked, so that the righteous and the wicked are treated alike! . . . Shall not the Judge of all the earth deal justly?” And God says okay! If He finds 50 righteous men, He won’t destroy the city.
Then Abraham gets a bit worried because he’s seen Sodom! There may very well not be 50 righteous men there: “Now behold, I have ventured to speak to the Lord, although I am but dust and ashes. Suppose the fifty righteous are lacking five, will You destroy the whole city because of five?” And again, the Lord says, “I will not destroy it if I find forty-five there.”

It takes boldness to fight on behalf of others! Even if we don’t have to debate the Lord of Universe, we may have to debate and/or counter the lies of Washington lobbyists and foreign policy elites – and some of them think they are God! So how can you be that bold?

Not in themselves, but in God. Abraham is in the Hall of Heroes, the Rock Stars of Faith, listed in Hebrews for stepping in faith. And James 2: 23 says “Abraham believed God, and it was credited to him as righteousness.” James goes on to say that Abraham “was called God’s friend.” This shows us another characteristic of an effective advocate:

•    Advocates have INTIMACY WITH GOD

God asked Abraham to sacrifice his own son, the son who was the promised one that God had given to him and Sarah who would make his descendants as numerous as the stars in the sky and the grains of sand on earth. Only because of Abraham’s intimate friendship with God could he know that God loved him and loved Isaac, and he could trust God in the face of such an unthinkable request. (Do you know that when God says to Abraham “take your son, your only son, whom you love. . .” it’s the first time love is mentioned in the Bible!)

Today as we pray and read the Scriptures appointed for this day, may we learn to be more audacious advocates for the Suffering Church in whatever way God calls us.
Scripture: One of the Psalms appointed for today is Psalm 144. Once again, please declare this Psalm as a prayer of faith for the persecuted. “Blessed be the LORD, my strength, and the strength of the Suffering Church in India,” for example.

Find a way in which you can be an audacious advocate today.

Father God, with Zechariah our hearts sing “Blessed be the Lord, the God of Israel,” because You have come to Your people and set us free. Jesus, You are a mighty Saviour, the Saviour of the world, and You do not forget Your children who are persecuted for Your Name’s sake. You have urged us in Your word to “come boldly before Your throne,” and so we do today, asking You to give us more boldness. Make us more audacious for the sake of the Suffering Church, Lord God. Amen.