Back to the Future: Advocacy for Soviet Era Christians 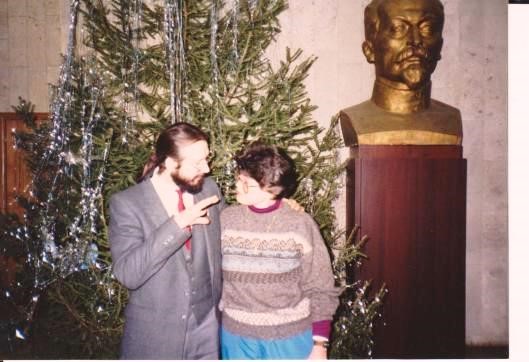 I discovered on Facebook today (writing on Friday, March 27) that it is my friend Alexander Ogorodnikov’s birthday. I’d already been planning to include Alexander, “Sasha,” in my devotions. So this seemed a perfect time to share my experiences in pre-social media-advocacy, and to honor early religious freedom heroes like Sasha at the same time. One cannot know fully the history of the modern-day persecuted church without knowing about Alexander Ogorodnikov!

Ogorodnikov is a Russian Christian who was imprisoned for nine years (1978-87) in Perm-36, a Soviet forced labor camp for “the most dangerous political criminals.” Before that, in 1976, he had been jailed in a psychiatric hospital because Christian faith was considered a “mental disorder.” How dangerous was Sasha? Well, he and some other young Russian intellectuals had come to faith in Christ, but many in the Soviet-era churches were afraid to accept them for fear of additional persecution. So they founded an underground, inter-denominational group called the “Christian Seminar” to discuss the Bible and theology. It attracted many young Communists who were searching for truth. Dangerous to the Soviet system indeed!

Last week I wrote about my earliest years at the Institute on Religion and Democracy (IRD) in Washington, DC, and how we relied on fax machines to send and receive information about persecuted Christians. But my first experience with advocacy for persecuted Christians such as Ogorodnikov and others persecuted by Communism began even before that.

Two things opened my eyes to this reality when I was a college student: a brochure from Eastern European Bible Mission, now known as Eastern European Mission, and an article by Jon Trott about persecuted Soviet Christians in Cornerstone magazine. The article in Cornerstone provided links to lots of resources (imagine that! even then, circa 1978, there were ways to find out about persecuted Christians!). And I looked into all of them: Keston College, CREED, the Society of St. Stephen, and others.

“Doing advocacy” then consisted mostly of sending handwritten letters by “Return Receipt Requested” to prisoners, like Ogorodnikov and many others, in Soviet labor camps and psychiatric hospitals. (And to commandants in charge of camps! We learned that though, sadly, many of places never delivered our letters of encouragement to prisoners, they did keep scrupulous records of every letter received by prisoners, and letters addressed to themselves. The prisoners who received letters were often treated more humanely as a result.)

Organizations working to defend persecuted Christians urged these letters and provided addresses to which to send them. CREED (Christian Rescue Effort for the Emancipation of Dissidents!) also sponsored Christmas and Easter card-writing parties, great for camaraderie, at the home of CREED’s late founder, Dr. Ernest Gordon.

The retired Dean of the Chapel at Princeton University, Dr.Gordon’s own story was incredible. He was born in Greenock, Scotland and served as a Captain in the Argyll and Sutherland Highlanders during WWII. He recounted his experience as one of the POW’s marched into the jungle to build the Burma-Siam railroad bridge in his book Through the Valley of the Kwai.

Dr. Gordon also sponsored an annual conference on Christian persecution at Princeton. It was an incredible time for like-minded individuals (shocked to find that there were more like themselves!) to hear from those who worked with the persecuted, and, if we were really blessed, someone actually from the persecuted Church. Through these experiences I learned:

In conclusion, I want to emphasize that last point that I made. When an interviewer asked Pasolini how he came to make the film, The Gospel According to Matthew, this is what he said:
I recognized the desire to make The Gospel from a feeling I had. I opened the Bible by chance and began to read the first pages, the first lines of St. Matthew’s Gospel, and the idea of making a film of it came to me. It’s evident that this is a feeling, an impulse that is not clearly definable. Mulling over this feeling, this impulse, this irrational movement or experience, all my story began to become clear to me. . .

Today, in a different era of persecution – still plenty of Communism to go around, but eclipsed by Islamic supremacism and jihad – God will have new lessons for us to learn to strengthen our advocacy for the Suffering Church. Let’s look to Him!

Blessed are those who are persecuted for righteousness' sake, for theirs is the kingdom of heaven. Blessed are you when others revile you and persecute you and utter all kinds of evil against you falsely on my account. Rejoice and be glad, for your reward is great in heaven, for so they persecuted the prophets who were before you. Matthew 5: 10-12

During Alexander Ogorodnikov’s imprisonment his guards tore the cross he wore off his neck 30 times. When I heard that, I determined from that time on to make the sign of the Cross during prayer in solidarity with those who suffer for the sake of Jesus. If you pray with the sign of the Cross, remember the Suffering Church in your sign.

The biography of Alexander Ogorodnikov, Dissident for Life, by Koenraad de Wolfe, is fascinating but seems to be currently unavailable for purchase except as an eBook. You can read my review of it. And Dr. Ernest Gordon’s story is in the film To End All Wars.

Prayer:
Lord, thank You for the lives and witness of children of Yours like Alexander Ogorodnikov, Deacon Vladimir Rusak, Irina Ratushinskaya, others who endured the gulag and much deprivation for love of You, and for advocates like Dr. Ernest Gordon. Help us to understand how blessed those of us are who experience both freedom in general and religious freedom in particular. Give us the grace to use our freedoms for the sake of the Suffering Church. In Jesus’ Name. Amen.