Art and the Ultimate Destiny of the Suffering Church 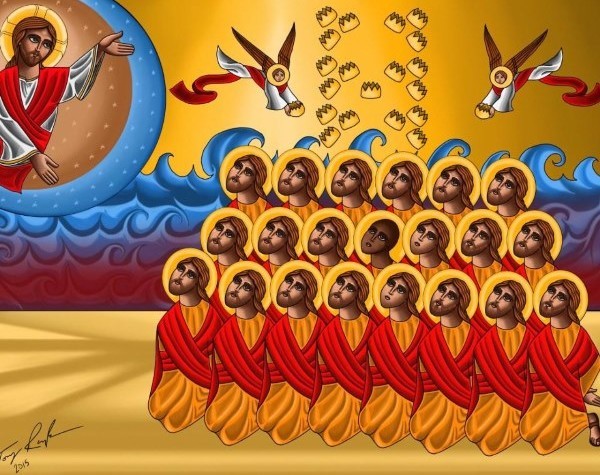 Yesterday’s devotions focused on Hungary, an advocacy partner for the Suffering Church. I mentioned their museum exhibit, Cross-in-Fire. The exhibit is both spiritually and artistically powerful. Hungary knows the value of creativity in advocacy, and so should we all.

God sometimes uses the arts speak to people in ways that sermons and teachings do not. The arts create a lasting impression – an image or a sound that cannot be forgotten. Advocates for the Suffering Church should be CREATIVE. We should utilize paintings, photography, poetry, sculpture, drama, films, songs, and other creative avenues to tell the story of persecuted brothers and sisters. Here are a few examples of art as advocacy:

That saving name/Of Him who comes/Bringing forth a greater tide.

“Come hear the tale and stand amazed at those who rest beneath the waves,” it continues. I am reminded of the 21 Martyrs. Although ISIS thought to terrorize and discourage Christians by releasing their horrific video — “the tale” — God used it to “amaze” people all over the world. The Body of Christ has grown stronger, especially in Egypt, where many rededicated their lives to Christ as a result of these martyrs and the faith of their widows and orphans.
Davey’s song concludes triumphantly with a powerful instrumental section to reinforce the lyrics. “Come hear the tale and stand amazed at those who dance upon the waves. Their minds are new, their hearts are safe, upon that Sea beyond the grave.” Not only the 21, but millennia of martyrs, who in the Book of Revelation are identified as “a great multitude that no one could count, from every nation, tribe, people, and language” dance upon the waves.

In Philippians, St. Paul tells us to think about whatever is true, noble, right, pure, lovely, admirable, excellent and praiseworthy. Advocates are always focusing on the sadness, heartbreak, evil, and destruction endured by the Suffering Church. But the artist helps the advocate to see beauty in spite of all that.

The man or woman who becomes an advocate for their persecuted brothers and sisters sees what is true and right and excellent as something to be defended at all cost. And art reveals the pure and lovely and noble in what only appears to be broken and violated and victimized. It proclaims admirable and praiseworthy those that only appear to be poor and downtrodden. And it helps us to see the end – the ultimate destiny – for both those for whom we are advocates and for ourselves: dancing upon the waves on that Sea beyond the grave.

Though the fig tree should not blossom, nor fruit be on the vines, the produce of the olive fail and the fields yield no food, the flock be cut off from the fold and there be no herd in the stalls, yet I will rejoice in the LORD; I will take joy in the God of my salvation. God, the LORD, is my strength; He makes my feet like the deer’s, He makes me tread on my high places. Habakkuk 3: 17-19

*This style music may not be to everyone’s taste, but I love it. I think the passion of the words is echoed in the music. This song touched me so deeply that I contacted the songwriter/lead singer, Seth Davey, a man who loves Jesus. Attalus broke up in 2018, and Davey is now writing and illustrating books for children, helping support an orphanage in Uganda.

Prayer:
LORD, it is easy to see the beauty created by artists and skilled craftsmen is important to You. As we read through Exodus, we see the beauty and significance in the details of the Temple, of the robes of the High Priest, and so many other intricate details. Thank You for giving us the beautiful and true to help point us to You. Thank You for art that touches hearts and convicts spirits of people, awakening them to the suffering and triumph of Your Body around the world. In Jesus’ Name. Amen.