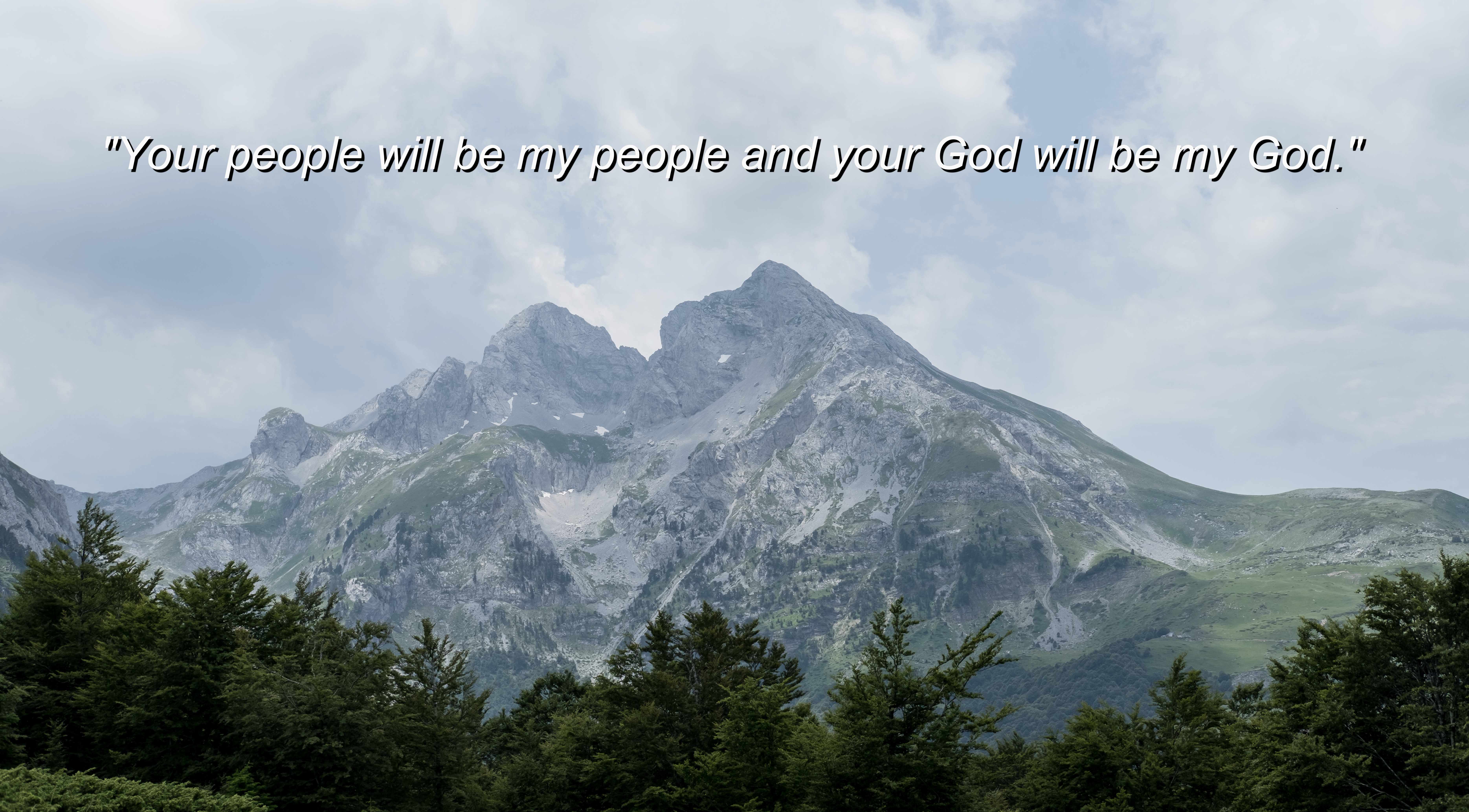 In the midst of so much pain, Naomi (Mara) receives a ray of hope. Dwelling in a foreign land, she learns that the famine that had affected Israel has passed, and she decides to return home. But this return to her home country is dramatic: she returns alone since both her husband and her two sons have died in a pagan land and she no longer has anything that makes her look confidently to the future (she has no offspring). Her two daughters-in-law decide to go with her, but Naomi asks them to go back to their families and try to rebuild their lives there. One of them, crying, says goodbye to Naomi and returns to her family. What about Ruth, the other daughter-in-law of this heartbroken woman? Here we will see her reaction to the words of her mother-in-law. It is a great story of love and dedication.

1. What is Ruth, Naomi's other daughter-in-law, doing?

In our previous reading we read that Ruth "clung to her." Instead of walking away from her, she hugs her. Her mother-in-law insists “Look, your sister-in-law is going back to her people and her gods. Go back with her.” Despite her bitterness, she does not want to drag Ruth into a life without a future, so she insists that she follows the footsteps of Orpah who has returned to her family to try to rebuild her life. Ruth, on the other hand, does not seek that. She decides to accompany the mother of her late husband and begs him not to make her leave: “Don’t urge me to leave you or to turn back from you.” She made a commitment and is going to keep it.

2. What is Ruth's beautiful statement?

Verse 16 gives us one of the most beautiful declarations of love in all of Scripture. Ruth, instead of seeking her own safety (that is, a future), decides to look after of Naomi. She does not seek her own wellbeing, but the good of his her mother-in-law. Ruth was a Moabite, but that was not an impediment for her to surrender to God and for God to accept her. This passage is one of the first passages that tells us that God is acting on the promise he made to Abraham centuries before, “Good will come to all the families of the earth because of you.” (Gen. 12:3). Ruth is one of those people who praises God for eternity of eternities: “I saw many people. No one could tell how many there were. They were from every nation and from every family and from every kind of people and from every language. They were standing before the throne and before the Lamb. They were wearing white clothes and they held branches in their hands. And they were crying out with a loud voice, “We are saved from the punishment of sin by our God Who sits on the throne and by the Lamb!” (Revelation 7:9-10).
Here Ruth does what Jesus shows us: she abandons what is hers to serve others, even at great personal sacrifice. In Philippians 2:5-11 we see Christ giving himself up as a sacrifice for others, and for this he is glorified. We can thank God that Ruth, in her self-giving, points to the one who will rescue us from our bitterness and oppression.

This short reading ends with Naomi returning to her land, but not alone; Ruth goes with her. In her pain, she allows herself to be loved and served by Ruth.

Think: In the midst of so much desolation, here we have one of the most beautiful passages in the Old Testament (in all of Scripture actually). A young woman (Ruth) is going to dedicate her life to take care of her mother-in-law, who has lost all hope. "Your people will be my people and your God will be my God." What have been the most beautiful words that have come out of your mouth to honor God?

Ideas for prayer: Thank God for the testimony that Ruth gives us here. Ask to also have the privilege of acting like her and thus glorifying Christ.

Translated from the Chilean Book of Common Prayer, page 128
Our Father, and our God, as pilgrims we ask your guidance for the journey; as soldiers we ask your strength for battle; as disciples we ask your wisdom, as ambassadors for Christ, your grace, so that we recommend our faith to all who do not know you; through Jesus Christ our Lord and Savior. Amen.

The House of Hope is a nursery school in a very poor neighborhood of Recife, Brazil, initiated by the Diocese of Recife. Thank God: they reopened on November 3rd; during the lockdown they were able to continue supporting vulnerable families; a fantastic building project was completed. Continue to pray that God blesses their mission to transform lives through the love of Christ.