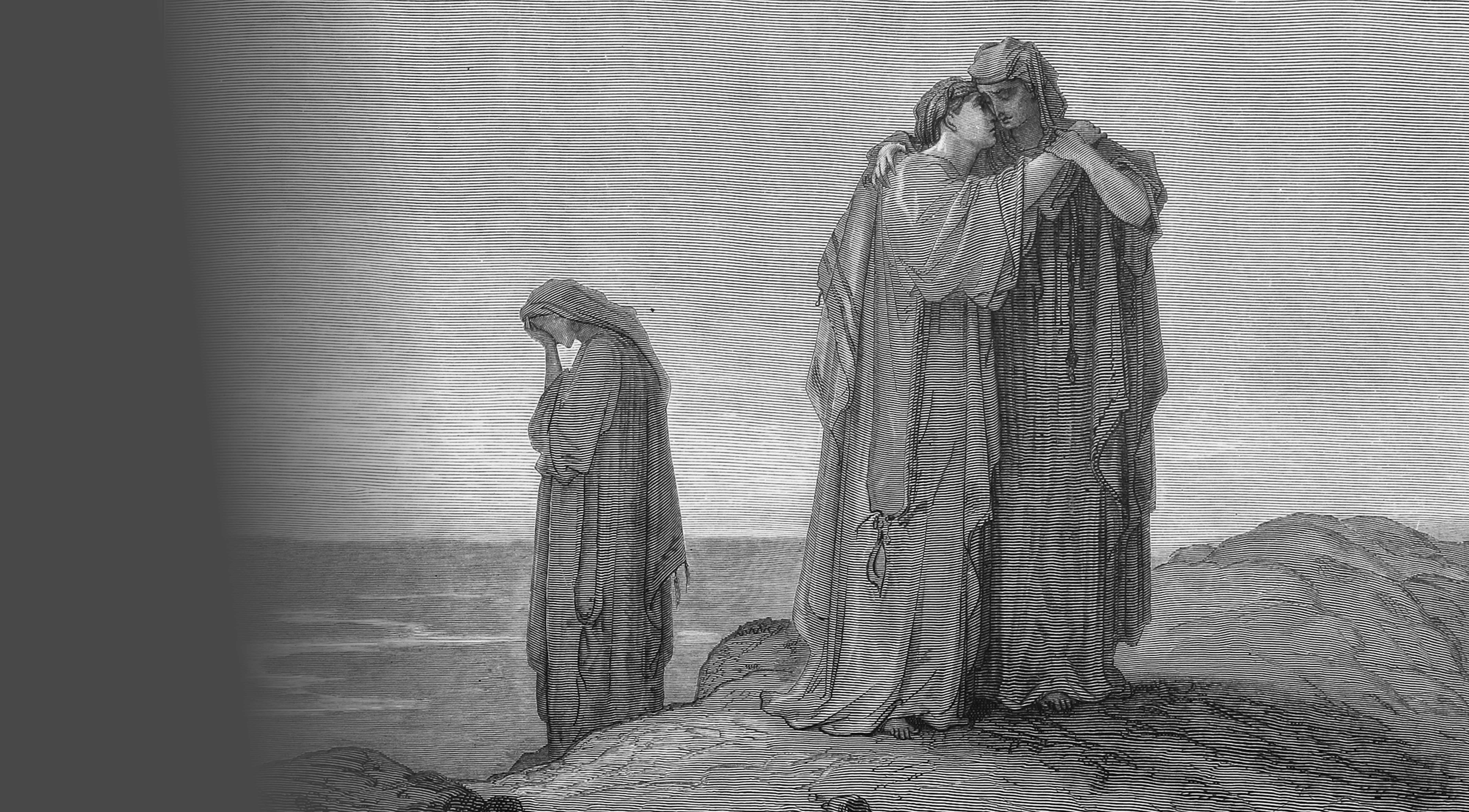 In this great love story that is the book of Ruth we see that although Israel turned her back on God, that does not mean that God abandoned His people. There is a future for them, not because they deserve it, but because God is determined to give them a future. God's people are not going to vanish into the haze of history and oblivion: beginning in this section of the book of Ruth we will see God acting to restore this family that went to live in a pagan land.
Naomi's situation is desperate. In God's land, it would have been difficult to be a widow and without male children, but outside of it, it would be far worse: she has been left without means of subsistence and without any hope for the future. She will have to learn that she is totally dependent on God's mercy and faithfulness. It will be good to read this passage and be challenged by it.

1. Naomi, the heartbroken widow hears that there is no longer a famine in Israel. What does she do?

If we remember our readings in preparation for Ruth, there is a cycle that begins when the people abandon God to go after the gods of the pagan nations. God hands them over to the consequences of their actions, which in this case is represented by the famine that devastated the land. Verse 6 tells us that the Lord had come to the aid of his people, which in Judges can be seen as an indication that the Israelites had returned to God. The famine has come to an end, so Naomi decides to return to her own. We must not overlook that her daughters-in-law do not question her decision, even though it means that they will leave their land.
Why does God help his own? He does not do it as a reward for their good behavior, but to show them that there is life and future only at his side. We cannot buy God's favor with our repentance or our good behavior. What we must bear in mind is that God welcomes the needy. This is what the parable of the prodigal son tells us about (Luke 15: 11-32). In the rest of the book, Naomi will learn that 'The Lord will not abandon his people, nor forsake his inheritance', Psalm 94:14 (see also Deuteronomy 31: 6, Deuteronomy 31: 8, Joshua 1: 5, Isaiah 41: 17, Hebrews 13: 5).

2. How does Naomi deal with her daughters-in-law?

Naomi, heartbroken, sees no future for her, or her daughters-in-law if they stay with her. So, she asks them to return to their families so that they may have a chance to rebuild their lives. It is true that later on we will see bitterness in this woman, but here she only has words of gratitude towards her daughters-in-law. She is overwhelmed, but that doesn't mean that she is not able to empathize with the plight of these two young widows. I think there is a lesson here: that our pain does not overwhelm us in such a way that we are not able to see the suffering of others. On the contrary, let us bless others with a good attitude, even in the midst of our pain.

3. How does Naomi describe her situation?

She is no longer in a position to have any more children and no one will continue the family line! She is bitter, she is no longer "sweet", because she feels that the Lord is against her. Naomi will have to learn that God is not vindictive and does not reject those who return to him. She will have to learn that God does not abandon his own, even if they are unworthy of his love.

4. What does Orpah, one of the daughters-in-law, do?

Orpah, crying, kisses her mother-in-law goodbye and returns to her family. And she exits the story; we never hear from her again. We cannot judge her and say that she is selfish; she is emotionally devastated and does not act out of reason or duty. We must take care of ourselves, because something can happen to us that overwhelms us so that we can see no way out except to abandon ourselves to desolation and bitterness. In our pain, the best we can do is return to God and throw ourselves into his arms. If God is for us, who can be against us? (Rom. 8:31)

Think: We citizens of the third millennium have a hard time understanding the drama we are seeing here. It is expressed in Naomi's name change. From ‘sweetness’ now she chooses to call herself Mara (‘bitter’). What does this tell us about what we experience when we turn away from God?

Ideas for prayer: Thank God that, in Christ, we have abandoned the bitterness of a Godless existence to now live in the sweetness of God. Ask his help to trust him always.

Psalm 62:1-2, 7-8
Truly my soul finds rest in God;
my salvation comes from him.
Truly he is my rock and my salvation;
he is my fortress, I will never be shaken.

My salvation and my honor depend on God;
he is my mighty rock, my refuge.
Trust in him at all times, you people;
pour out your hearts to him,
for God is our refuge.