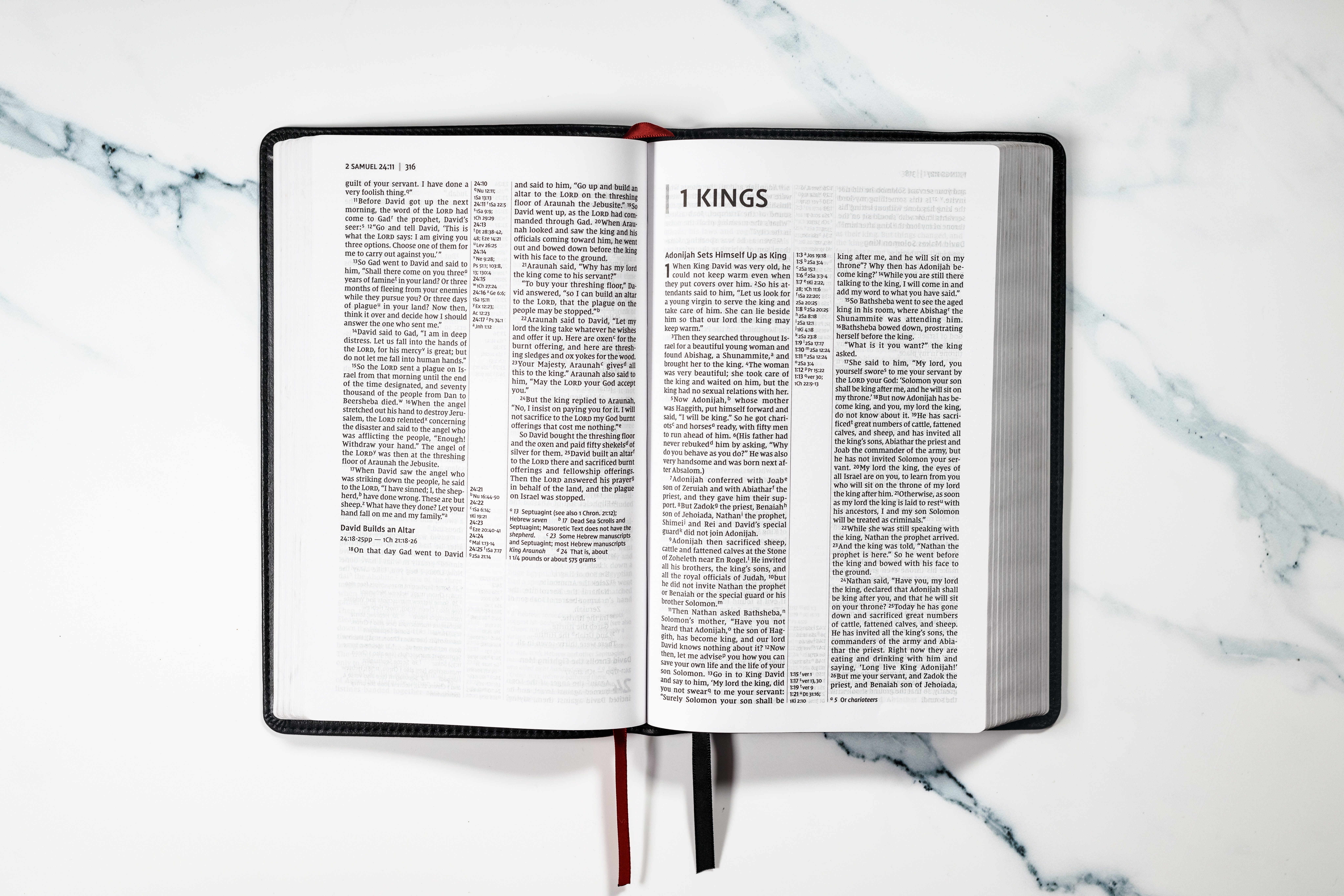 One of the most unsettling moments in a society is when power transfers from the present ruler to his or her successor.

Even when there’s clarity about who will rule next, there’s still uncertainty about how that ruler will rule, and what they’ll be like as they take the throne.

In the first chapter of 1 Kings, we see the final, uncertain days of King David’s rule.

The victor over Goliath, the mighty ruler of God’s kingdom, was now old and frail, and nobody knew who’d replace him as king.
God’s people craved stability, but even King David couldn’t provide it.

Yet, even in that uncertainty and confusion, we’re drawn to recall the promises made to a younger David, when the Lord told him: ...when you die and are buried with your ancestors, I will raise up one of your descendants, your own offspring, and I will make his kingdom strong. [...] Your house and your kingdom will continue before me for all time, and your throne will be secure forever.’” (2 Samuel 7:12, 16).

This promise is then fulfilled initially in the transition of power from David to his son, Solomon, even though this was threatened by the aspirations of his unruly son, Adonijah.

The promise of the Lord would be fulfilled, despite the hunger for power, and the machinations of politics.
Nothing would stop the right king being seated on the throne of God’s kingdom. Nothing would stop Zadok, the priest, anointing Solomon with oil, as the people shouted “Long live King Solomon!” (1 Kings 1:39).

The original word for ‘anointed one’ is ‘Messiah’ in the Hebrew of the Old Testament, and ‘Christ’ in the Greek of the New Testament.
This means that Solomon, like his father David, was a Messiah, or a Christ, in God’s kingdom. He is the one whom the Lord chose to rule over his people.

Yet, throughout the twenty-three chapters of 1 Kings, we will see that none of the Messiahs, those anointed kings, rule as they truly should.
Our hunger for true kingship is never, truly satisfied with the kings of 1 Kings.

We meet some good kings, some bad kings, and some truly-evil kings.  The scriptures show us their strengths and their weaknesses, and throughout the journey, we develop a taste for what a true king of God’s people should be like. As Christians, 1 Kings gives us an appetite for what the true anointed king, the Messiah, should be like.

Then, with that hunger for true kingship, the New Testament dawns, with the opening verse of Matthew’s Gospel, which brings us “a record of the ancestors of Jesus the Messiah, a descendant of David...” (Matthew 1:1).

As Matthew lists the names of many of the kings of 1 Kings, we remember afresh the desperate need for a Messiah who would faithfully and perfectly rule God’s kingdom.

This is why 1 Kings matters so much to Christians, for it shows us God’s faithfulness in providing the true king for his throne, especially given the failures of those who ruled before Jesus.

What’s more, it gives us hope when we see kings and rulers abusing power, for we are drawn to the kingdom of Jesus which “is not of this world” (John 18:36).

If we trust in the ultimate Messiah, Jesus Christ, then we know that no matter how stable or unstable is the rule of our modern rulers, we know that Jesus is seated on his glorious throne (Matthew 19:28).

Heavenly Father, your kingdom is strong and your throne is secure. Lead us to trust in your promises in our fears and our doubts, knowing that at the name of Jesus every knee should bow, in heaven and on earth and under the earth, and every tongue declare that Jesus Christ is Lord, who lives and reigns with you and the Holy Spirit, now and for ever. Amen.

The situation in northeast Nigeria is dire, with kidnappings, attacks, and killings. Some of the 140 recently kidnapped children whom we prayed for have been returned but around 80 are still in captivity. Continue to pray for the kidnapped children, for law and order to be restored, and for the mission of the church.