Streams in the Desert 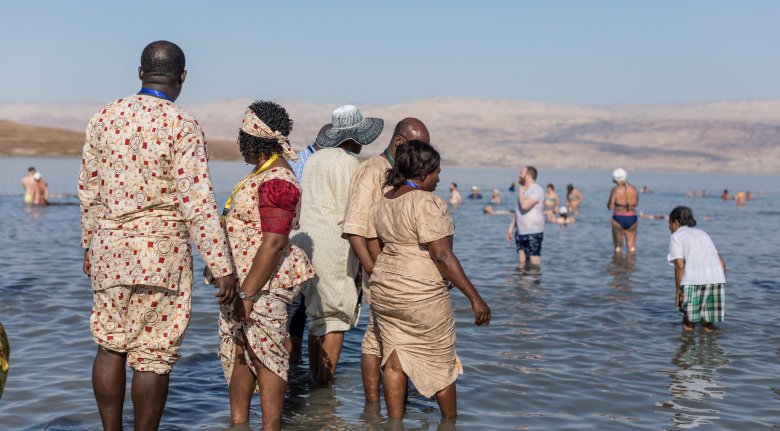 The 1662 prayer book’s Burial of the Dead says, “In the midst of life, we are in death,” but here on our Gafcon tour of the Dead Sea, we found the opposite: in the midst of death we were in life. It was not just the vibrant colors of African dresses on the monochromatic desert backdrop that made this impression, but the stream of laughter, comradery, and conversation moving towards the lowest place on earth, testifying to the church’s ability and prerogative to laugh in the face of death. “Where, O Death, is your sting?” Not here, where the church is.

The tour began at the sight of Jesus’ baptism, where the Jordan River snakes its way through the wilderness, creating oases that quickly cut away to dried, packed dirt and clouds of dust. Towards the West are the Mountains of Temptation, where Jesus walked into the heart of death to face the Lord of Death, and won. We wound our way to Qumran, where the views from mountain caves spread out across the fields of cracked earth to the Dead Sea in the distance. There, in the 1940s, ancient scriptures were discovered in clay jars by a shepherd boy searching for his goat. Within empty, arid caves, unexplored for almost 2,000 years, was a treasure trove of the life-giving Word on scrolls written by Essenes waiting for the Kingdom of God. After Qumran came the Dead Sea. There you could look out on the Gafcon delegation streaming towards its shores. About half came: 1,000 people from around the world enjoying the mud baths, floating on the thick, salt water, taking in the dynamic landscape, and perhaps having some refreshment at the lowest bar on earth. Fellowship, movement, joy; all at a place where life often grasps at survival and loses, where the will to push forward and survive to the next generation is often overcome by the merciless oppression of an unrelenting sun.

But isn’t this God’s way? Why did so much of his work happen in the desert: from wilderness wanderings, to the crossing of the Jordan, the ministry of Elijah, the temptation of Jesus, and the Ethiopian’s baptism by St. Philip the Deacon? God sometimes takes us to the lowest places on earth for the highest purpose.  Our story may begin in wilderness, but it ends in a garden-city; it may begin in death but ends in life. In the same way, Gafcon grew up in arid times, when the Church was beginning to lose its way, when leadership grew as stagnant as the Dead Sea, when the green pastures to which God had brought us began turning to dust. Yes, in the midst of death, there is life. Gafcon is living it out now, together, pushing forward to the next generation of those committed to the Lordship and Gospel of Jesus Christ. There may be a desert around us, but there are springs, too; some of which are breaking out now. Some streams are made for the desert; some movements are made for such a time as this.

About the Blogger: The Rev. Francis Capitanio is Assistant to the Anglican Bishop of New England and often serves on the ACNA Communications Team.