Sometimes You Just Have To Admit Your Dad Was Right… 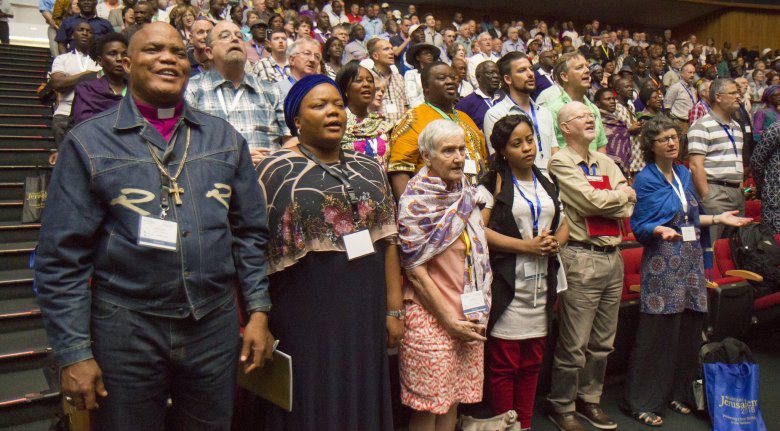 If I am honest, I was fairly ambivalent about attending Gafcon 2018 when my father shared about the possibility of going to Jerusalem. I said I was happy to attend, but if it was too hard to find me a spot, it was alright. Last night, I felt the need to formally apologize to him for that ambivalence, because this week has already been one of the most encouraging experiences of my relatively young life.

I am a child of Gafcon, in many senses. I was 13 when my father made the decision that he could no longer live under episcopal leadership that was contrary to the Gospel of Jesus Christ. Because of Gafcon leaders, my family was taken into the Province of Rwanda. On my college applications, when it asked for my father’s occupation, I wrote, ‘Missionary from Rwanda to the United States’. I feel a deep personal gratitude to Gafcon for the way that they stood with my family.

But it is not only my personal life that reflects a Gafcon child status. As a member of the Anglican Church in North America, I am a part of a movement that was birthed out of this movement, that gave way for orthodox Anglicanism to thrive in the North America. It wasn’t until I heard the ‘Why Gafcon?” session, however, that I made these connections. I was humbled by the grandfathers of Gafcon who have spoken about the work that it took to get to this place, and the great sacrifice men like Archbishop Akinola, Archbishop Jensen, Archbishop Rwaje and many others made, in every sense of the word, on behalf of people like me, defending the truth of the Gospel and sparing no expense.

When Archbishop Stanley Ntagali stood up Tuesday and said that the House of Bishops in Uganda would not attend Lambeth unless the Anglican Church in North America (ACNA) and the new province of Brazil were included, tears streamed down my face.  I sudddenly realized that he was doing this on my behalf, not because of me or any other members of ACNA or the new province of Brazil, but because of the Gospel of Jesus that has compelled all of these courageous men to stand for truth. Archbishop Ntagali, in his brief 5 minute speech, gave the rationale for this decision as such: ‘the Church of Uganda is an evangelical church, and we obey Christ, and the authority of the Bible, and apostolic faith, so we have no apology for the stand we have made as the Church of Uganda, and we continue to proclaim the Gospel of Christ to the nations uncompromisingly.’

As a child of GAFCON, I pray that my life and ministry will live out this legacy set before me, and that I might say with fidelity that I will always proclaim the Gospel of Christ to the nations uncompromisingly.

Nancy-Page Lowenfield is a theology student at Wycliffe Hall in Oxford, UK. Prior to resuming her studies she served as Director of Communications for the Diocese of the Western Gulf Coast (ACNA).