'If anyone would come after me, let him deny himself and take up his cross...' 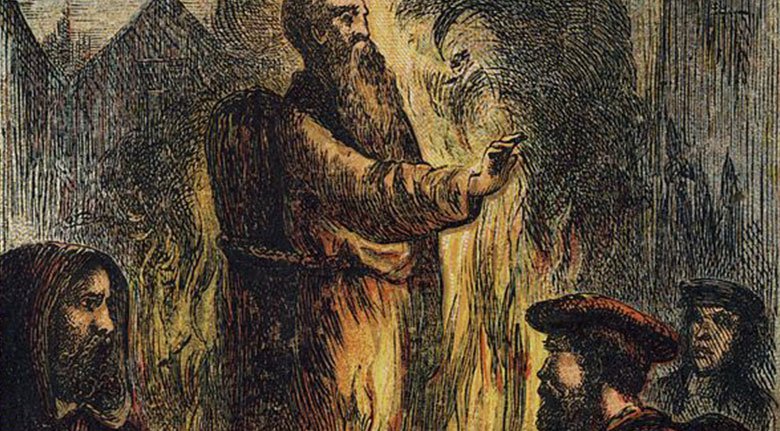 Horrible violence was not the fault of one side only in the Reformation struggle.

But that is no reason for us to forget the men and women whose stand for the Reformation of the Church of England in the interests of Biblical truth, cost them their lives. In particular, the fact that the three great episcopal witnesses, Hugh Latimer, Nicholas Ridley and Thomas Cranmer were put to death in Oxford during the years 1555 and 1556 is one from which we should draw courage and confidence.

Hugh Latimer, Bishop of Worcester, was famous as a preacher of the biblical doctrines. Nicholas Ridley, Bishop of London, was a very learned theologian. Thomas Cranmer was the Archbishop of Canterbury and in many ways the architect of the Reformed Church of England, not least through his contribution to the Book of Common Prayer and the Homilies. These men were at the forefront of the task of preaching the gospel, shaped by the Bible, to evangelise England.

In the modern world, the whole concept of martyrdom is tarnished. It is so often connected with terrorism and murder. The so-called martyr commits suicide in a way which destroys the lives of others. This is not remotely connected to the genuine Christian concept. The martyr is not a self-hating masochist, and Christianity is not a blood cult.

Even in Christian history, however, there have been distortions. Sometimes the martyr has courted death, seeking the way of martyrdom in the conviction that this is especially pleasing to God. Such a belief has been fostered, too, by the special status granted to the martyr, almost as though sainthood has been achieved.

Meanwhile, some of the responses to the sacrifice made in war (not least the First World War) seemed to enrol the fallen soldiers amongst the martyrs. We may admire and be profoundly thankful for that sacrifice and courage, but it is not martyrdom.

But does this mean that we should not remember Latimer, Ridley and Cranmer? On the contrary, it is right for us to do so, and with thanksgiving, provided that we recognise two key factors.

First: the path of the martyr is the same as that of every believer: as Dietrich Bonhoeffer famously said, 'When Christ calls a man, he calls him to die'. The summons of Christ is to take up our cross and follow him. It is the path of self-denial, of self-sacrifice, of death to self. For some of us - this will indeed lead to a death, not longed for, but accepted, if the alternative is to repudiate Christ. But in principle, it is the path of all of us.

Second: in itself, martyrdom does not justify a cause. The truth still matters. A brave and sincere person may still be utterly wrong. Your faith is only as good as the truth on which it rests. Thus, when it comes to our martyrs, we may admire them, but sorrow that they gave their lives unnecessarily for a false cause. If, on the other hand, we believe that their faith was true because it was based on the truth of God's word, we not only admire them - we are the constant beneficiaries of their witness.

And they taught, lived and died to witness that all is to be done to the glory of God and not the pride of man.

This is the biblical verity and it was sealed in their blood.

Being a Christian today may not lead to the same bloody sacrifice as the martyrs, but it will entail discomfort, unpopularity and rejection. Unfortunately, some of that pain will come from people within the church.

The death of the Reformers poses this question for us: Are we prepared to take up our cross and follow the Lord this day and every day?